Emotions are hard to explain no? It's this amazing thing about us, humans, that transcends any and every language on earth. Maybe it's because emotions are the way the heart expresses itself. Mercedes-AMG has always built cars with emotion at its centre. Cars that make the heart swell with joy whilst at the same time beat hard as it comes to terms with the sheer power that's being unleashed. The Hyderabad chapter of the OVERDRIVE AMG Emotion Tour gave a select few customers and prospective AMG buyers a chance to experience an AMG and what it can do to the senses. 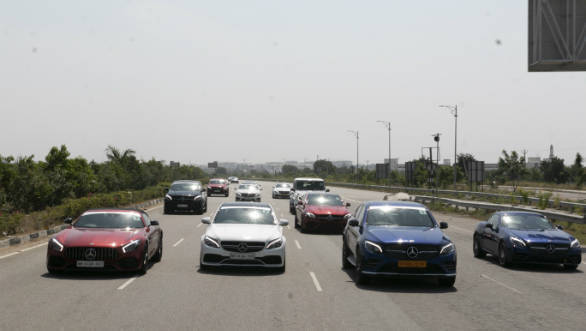 As we gathered at the AMG Performance Centre, Hyderabad, one could sense the excitement in the air. One could not help but stand amazed at the sight of the AMGs being warmed up in the showroom's foyer. From the sleek and attention-grabbing AMG GT Roadster to the burly G 63 AMG in its latest avatar, to the C 63 AMG as well as the GLC and GLE 43 AMG, each car was arresting in its own way. After a quick driver briefing, we rolled out of the showroom and directly into the cut and thrust of Hyderabad's traffic. It quickly turned out to be the ideal display of how easy it is to manage these powerful machines in everyday situations, given the fact that even the least powerful car in the convoy made over 300PS. With all those horses on top, the participants were surely getting restless to explore the potential of their cars.
Their anxiousness was shortlived as we soon turned on to the Outer Ring Road or the ORR as it is popularly known. This spectacular ribbon of tarmac is a 158km, eight-lane wide expressway that encircles the city of Hyderabad. It's here where the glorious bi-turbo V6s and V8s could sing in all their glory, the occupants pinned to their seats as the cars unleashed their monstrous power. The distance to the horizon seemed to shrink in a blink and in a matter of a few seconds, an all-encompassing sense of joy took over the convoy. For many, in those moments, the term performance was redefined. Danish Khan, one of the participants couldn't help but revel in the experience of the AMGs, barrelling down the highway provided. "It is simply surreal," is all he could say as we stopped for lunch after a series of ORR runs. 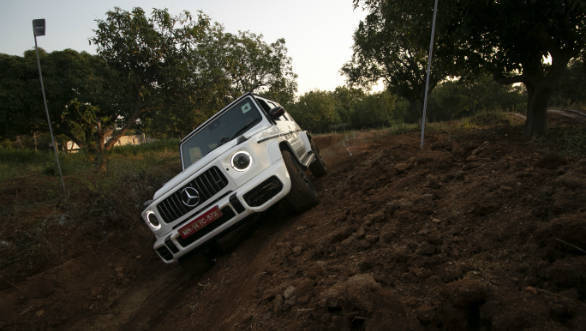 Later that day, the participants got a chance to discover a rather unseen capability of AMG SUVs. Now it's uncommon to see luxury SUV owners wander down mud trails or indulge in a bit of off-roading, at least in India. But driving AMG spec SUVs off-road. Who would even think of doing that? Which is why a few of the participants were left gobsmacked when we told them that they'd be driving the G 63 AMG and GLE 43 AMG on a prepped off-road course at the Dr Chaitanya Farms. The good Doctor has participated in the Rain Forest Challenge (RFC) in India, undoubtedly among the toughest off-road driving events in the world. That should probably give you an idea of what we had in store for the AMG enthusiasts. There were deep ditches as well as steep, 45-degree inclines and descents, giving the prospective customers an idea of the advanced 4MATIC, four-wheel drive systems in these SUVs. The mighty G 63 managed to floor everyone with its incredible wheel articulation. Driving through the course was a cinch in it as its lockable differentials and 850Nm producing V8 motor was more than enough to get out of any situation. The GLE 43 AMG, on the other, wasn't as well-equipped to tackle off-road obstacles, but it managed to sail through, much to the amazement of Imran Khan Ahmed and Shray Agarwal. "I didn't expect the GLE to do it but after driving it through the course, I'm impressed," said Agarwal. 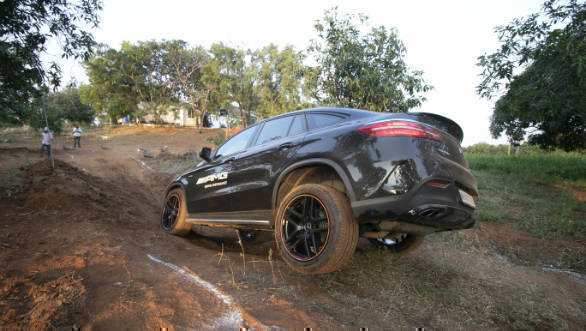 As the sun began to set, we headed towards our abode for the night, the magnificent Taj Falaknuma Palace. Built in 1894 and situated at 2,000 feet above sea level, overlooking the city of Hyderabad, the Palace was the home to the Nizam of Hyderabad. It was the seat of power for many years and saw many important Indian and foreign visitors stay in the palatial rooms. Restored and refurbished recently by the Taj group, the Falaknuma Palace still oozes the charm and grandeur of the past. Later that night, the participants were taken on a trip down memory lane as the hotel arranged for a heritage walk. We were shown some of the original artefacts, books and paintings that have been preserved with utmost care. The cultural indulgence continued through the night as we were treated to soulful Sufi music while relishing a sumptuous spread of Hyderabadi cuisine. The participants also bonded over conversations about the AMGs, their sheer power and usability in our conditions. And we still had a bit of driving left for the next day before returning the cars at the AMG Performance Centre.

While the drive to the dealership was short, we did take a small detour to visit the Guns for Glory Shooting Academy at Gachibowli. As the convoy rolled into the parking area, we were greeted by the loud bang of gunshots. There were a few people practising their shooting skills, some at a professional level. Soon we gathered around our instructor who explained the correct technique of holding a pistol followed by a session of loading and aiming. This was followed by a similar session but this time with a rifle. And then it was time to aim and shoot. 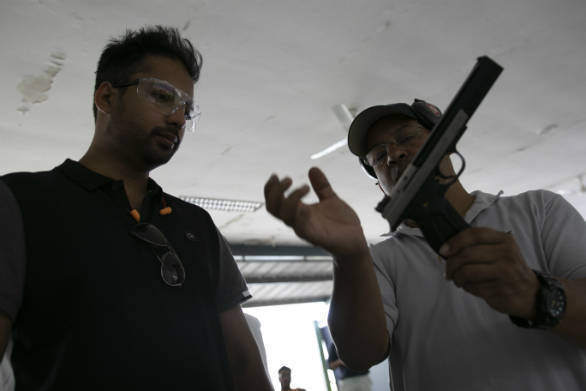 The participants took turns with the pistol and rifle, aiming for the bullseye. Frankly, it wasn't as easy as it looked in the beginning. The target, to begin with, was placed further than what one would expect, and getting the aim right was akin to threading a needle in the dark. So while some were way off the mark, some were bang on target. It turned out to be as much as a test of patience as much as of skill. Nevertheless, it was a fun session that also gave some people a chance to discover an innate but latent talent.

As we drove towards the Performance Centre a sense of contentment took over. Two days with Affalterbach's finest had stirred up myriad emotions in all the participants, mostly of sheer joy. From the sure-footed handling to the glorious sound, the AMGs had done what many cars fail to do these days. They managed to tug at the heartstrings of those who love to drive. And there never can be enough words to express that, just emotions.