Compression Ratio (CR) is a simple term. It's the ratio between the maximum and minimum cylinder volume of an internal combustion engine. That means the ratio between the cubic capacity when the piston is at the bottom of the stroke (BTDC) versus when the piston is at the top of the stroke (TDC). In effect, CR, expressed as 11:1 for instance, tells you that this particular engine will compress the incoming charge (air-fuel mixture) 11 times before combustion. 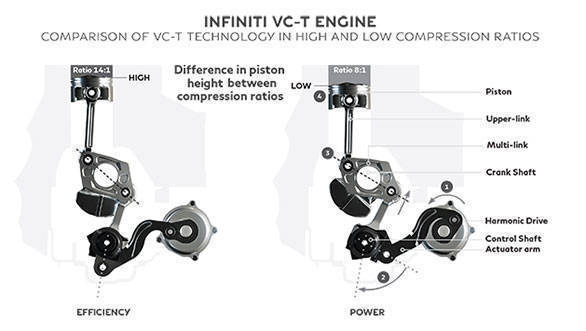 As you should already know from previous OVERDRIVE articles and Simple Tech, high compression ratios produce bigger combustion events which are usually more powerful as well as more efficient. The flip side of high compression is that the engine has to be built robust to handle the big bangs (which is why diesel  compression ignition  engines are typical heavier). More importantly, high CRs make engine sensitive to fuel quality, and bad fuel produced detonation can leave lasting engine damage. High CR engines also tend to run best in a narrow rev range which can make them harder to use. Many technologies, like variable intakes, variable valve timing etc. aim to open the power and make these engines more flexible and friendly while keeping the power.

The thing is that up until now CR isn't a variable for an engine. An 11:1 engine remains an 11:1 unless someone alters the cylinder configuration with a new piston (in bore and/or stroke), head gasket or combustion chamber design. This also implies that engine designers do have to make a choice between power and economy, and engines cannot be made exceptional in both of these two areas simultaneously.

Normally, the way to get power when everything else is maxed out is more displacement. Which might burn more fuel but it might be less stressed overall. A thicker gasket, if stress is a bigger issue than power, can reduce the compression ratio slightly. If re-tuned to use the extra space mode efficiently, it can be used to make power as well.

What Infiniti has invented is a way to control the compression ratio of the engine. So you can have extremely efficient high CR running for power or economy or run at a lower CR for great power without straining the engine. This has been a great engineering challenge, and Infiniti will display its solution Variable Compression - Turbocharged (VC-T) at the forthcoming Paris Motor Show.

A variable compression engine, make no mistake, is a revolutionary idea. The CR determines a lot of things and is a major factor in suiting an engine to its intended role. But, for example, Infiniti says its 2.0-litre VC-T 4-cylinder produced segment-par economy but with power that would normally be associated with a 3.0-litre V6!

So how does it work? On the left of the diagram is the VC-T running a high compression set-up for high economy, low power. It's how the engine would be, for example, when you're on the highway at a steady cruise.

Notice the parallelogram piece that is connected to the con-rod. That piece, the Multi-Link in Infiniti Speak is the key to the whole thing. In the high-compression configuration, the rectangular unit is tilted higher on the con-rod side. This piece rotates with the crank while maintaining its orientation. But the other end of this piece is connected to a mechanism that gives it an alternative configuration.

To keep it simple, when you press the accelerator and demand more power, the engine's high compression 14:1 configuration is not appropriate. What happens is that a harmonic drive (think a motor that oscillates between two positions rather than rotates) moves causing an actuator arm to move the rectangular piece by pushing it upwards. This causes the con-rod end of the piece to rotate downward moving the piston to a lower TDC position, effectively causing compression to fall to 8:1.

At this low compression setting, Infiniti uses a fair amount of turbo boost to produce power without really stressing engine components as it would if the boost was applied at a higher compression state.
It's early days yet, but from what we can see the primarily issue is that the system adds a lot more complexity and moving parts to the engine. This isn't necessarily indicate a reliability issue, but yes, the more parts in the engine, the more things that could break.

But no matter how it bears out, a variable CR internal combustion engine is a genuine revolution.