Valves or poppet valves control the inflow and outflow of air inside the cylinder for burning fuel and powering the vehicle. Valves are operated by the camshafts placed above them. Valves sit in the cylinder head above the piston and seal the combustion chamber (internal space where fuel is burned) from the atmosphere when the engine is not in operation. Air paths are bored out inside the cylinder head for each cylinder, which originate from the valve seating and connect to a manifold or common collector box. 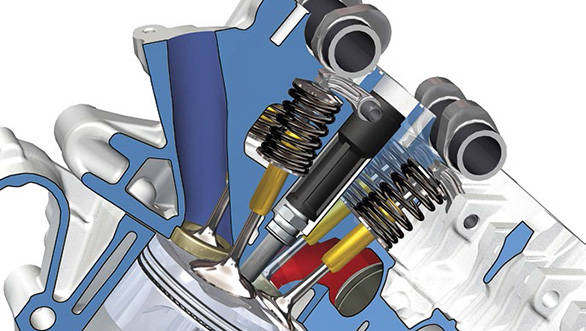 Now for the seamless operation of the engine, we need at least a couple of valves, namely the inlet and exhaust valve. For example, when the piston is moving downwards in the suction stroke, it creates vacuum inside the cylinder and the inlet valve opens inwards to let the fresh air in. When the piston moves upwards and compresses the air inside the cylinder (compression stroke), both the valves are closed. The fuel is burnt with the compressed air, and the piston is pushed down in the cylinder (power stroke). When the piston comes up again, the exhaust gases created due to combustion are expelled by the opening of the exhaust valves (exhaust stroke) and the cycle repeats. This is the example of the simplest form of valve arrangement, a 2 valve/cylinder arrangement, as most prevalent in 100cc 4-stroke bikes.

When the displacement or the rpm of the engine increases, more air is required to burn more fuel, hence bigger valve area. This can be achieved in two ways -  a large inlet and exhaust valve, or two small inlet and exhaust valves pair. The latter is a 4-valve/cylinder arrangement and widely used by the manufacturers for the reason that two small valves have greater surface area than a large valve for the same space occupied, and also a small valve carries less inertia than a large valve, thus better for high-speed operation.

Manufacturers have even used 3-valve/cylinder (TVS Flame) and 5-valve/cylinder (Ferrari F355) arrangements, but these are less conventional owing to the limited gain they deliver for specific performance parameters.

As discussed earlier, valves are opened by camshafts, but what closes them back and keeps them in contact with the camshaft are the 'springs'. Almost all passenger cars and bikes use metallic wire springs for closing the valves, simplicity in design and reliability being their trait. But the trait changes when the rpm increases, especially in racing engines, where the metallic springs are unable to retract the valve as quickly as the frequency of piston strokes and we are left wanting for more revs.

There are alternatives though. Ducati has a unique Desmodromic valve-train which has an innovative arrangement of closing the valves with a mechanical link, rather than springs. Hence, as the rpm increases, the valve movement keeps up with the piston strokes. Formula 1 and most Moto GP engines employ pneumatic valve springs for the rapid closing of valves at those very high revs.

Much R&D has gone in to make the springs perform better under adverse conditions, hence high-performance road cars and bikes still prefer springs over Desmodromic or pneumatic valve springs because of the high cost involved in these options. One very promising development that surfaced lately is electromagnetic valve springs, i.e. the opening and closing of the valves is precisely controlled by electricity and magnets with the total absence of any mechanical link. But this is still a distant dream before it comes to the production level.