A gear is just a wheel with teeth on its circumference. A gear train is the marriage of one or more gears. The marriage can take the form of a direct meshing of the teeth or by a linking mechanism like a chain, belt or shaft. In either case, there will be a driven gear which will be rotated by the other gear wheel. On a bicycle, for instance, the gear mounted with the pedals is the driver and the rear gear (aka sprocket) is driven.

In an automotive engine, the rotation of the crankshaft drives a shaft called the output shaft, which is the connection between the engine and the gearbox. Various mechanisms, including prop shafts in cars and chains or belts in motorcycles connect the gearbox to the driven wheels' axle.

In the middle of the gearbox is a collection of gear trains that exist to ensure you can use all the power the engine makes as effectively as possible. Let us see how.

If you coupled your engine directly to the driven wheel, what would happen is that at 5,000rpm of engine speed, the wheels would also rotate at 5,000rpm. This, obviously, is a very difficult way to drive or ride. But this is a 1:1 ratio gearbox in effect. As in the gear on the output shaft and the one on the driven axle rotate at the same speed.

When you put in a geartrain in the middle what you achieve is a combination of a bigger and a smaller gear. What this does is allow the bigger gear to rotate slower. As in 5,000rpm of engine speed could be made to result in something more manageable and useful, like say, 1,000rpm of wheel rotation.The gear ratio, a comparison of the number of teeth on the two gears in this case, is 1:5 (usually written as driver:driven), and it also indicates the relative speeds of the two gears in question. This kind of a big ratio is usually reserved for the lower gears where the engine needs to get the vehicle moving, requiring the matching of relatively high engine speeds to slow wheel rotation. 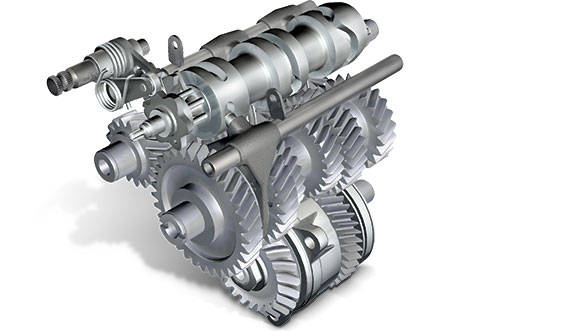 As the car accelerates, the 1:5 ratio will become less and less useful. This is because at faster wheel speeds, you'll need the engine to rev higher and higher for the gear ratio to work. Which is why the next higher gear will bring the ratio down. Usually, the highest gear will be almost 1:1 because it presumes higher speeds (actual as well as in terms of wheel rotation).

Since an engine has a finite rev band ? starting from idle and up to redline ? a series of gear trains are combined to create a gearbox with the ratios carefully selected to suit the intended role of the vehicle. As in a high-performance vehicle might have a gearbox that allows the engine to sit between peak torque and power as often as possible while a high-economy vehicle would opt for ratios that allowed the engine to remain in its most efficient rev band as much as possible.

Essentially, a gearbox is a very complicated mechanism that basically converts the rotational force coming from the engine into useful wheel speeds. When you compare the gear ratios within a gearbox the difference in the ratio is an indicator of how closely or far apart the ratios are. As in 1:5 and 1:3 are farther apart than say, 1:5 and 1:4.5. In driving that means when you shift gears, the first combination will cause a bigger drop in revs than the second.

When you look at an automotive gearbox, it does look extremely complex because converting 5,000rpm engine speed to 1,000rpm wheel speed is much simpler in concept than in application. The typical gear train will usually use a series of gearwheels to achieve the result and each gear in the gearbox will, in turn, require it's own gear train.

But the end result is always the same ? to make the engine's performance useful in the real world. 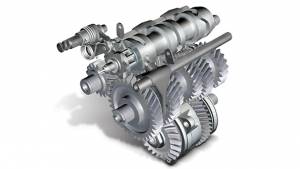