We have all had toy cars as kids, right? Some of us still do. Well, take one out. A toy car usually isn't front- or rear-wheel driven. You push the body and the whole thing moves. Now look at the wheels. Chances are a small metal or plastic rod connects the two front and rear tyres. As long as you push the car in the straight line, this is a good arrangement. However, look closer while you make the car change direction and you'll see the problem. You see, because the inner and outer wheels in a turn actually carve two different circles of different radii, they travel a different distance on the same turn. Since the wheels are usually the same size, the outer wheel has to rotate faster to keep up with the inner wheel which is travelling a shorter distance in the same time. When you connect the wheels with a hard axle, like on the toy car, one wheel is obliged to drag along uselessly while the other wheel controls the process.

Now think of the rear wheels of a front-wheel drive car. They're not in too much trouble because the engine isn't directly driving them. You could just uncouple them from each other and let them vary their speeds till they're happy. But when you add an engine into the mix, like on the front-end on a front-wheel drive car, things get complicated. Because now the engine is trying to turn these wheels at equal speed. But turning requires the speeds to vary and on a rigid axle they cannot. The result is a vehicle that's unweildy to turn and use. Not nice. And that is where differentials come in.

What they do is allow the two wheels to rotate at different speeds. It's a simple function but an important one and the mechanics are slightly complex. But in all cases, a differential is placed between two driven wheels to allow the wheels in question to vary in rotational speed during a turn. Four-wheel drive cars, the hardcore ones, will add a differential between the front and rear axles as well - called, naturally, a centre differential - to allow variation in torque between both the driven axle sets. 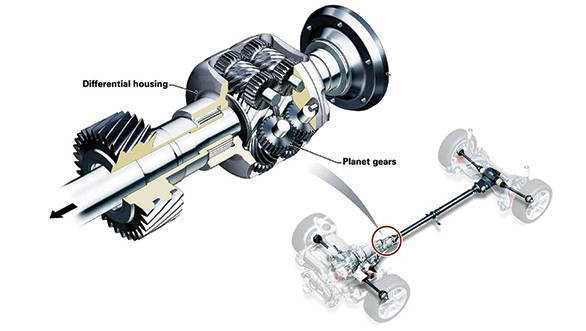 In a front-wheel drive car, the differential or diff, is seated within the same housing as the gearbox while a rear-wheel drive car will feature the diff as a mid-axle globe into which the driveshaft disappears. In most cars, the diff uses bevel gears. To understand bevel gears, think of an ice cream cone with gear teeth on its outside, meshing with a plate which also has teeth along its outer edge. The rotation of the cone would cause the plate to rotate as well. In automotive applications, the bevel gears are made of metals because they're harder and usually designed to mesh so that torque turns 90 degrees. So if the driveshaft's torque arrives along the chassis, the bevel gear in the diff will turn it 90 degrees - where the wheels are.

In the most simple form of the diff, the driveshaft ends in a bevel gear which is called the pinion (the ice cream cone). The plate from our example is called a cage and it's rotated by the pinion. In the middle of the cage is an arrangement of four bevel gears. Two pinions lead off to the two wheels and the other two are bolted to the cage and mesh with these. This arrangement always transfers equal torque to both wheels (called an open differential) but allows the two pinions (one for each wheel) to rotate at different speeds when the vehicle takes a turn. The pinions bolted to the cage are basically stationary when the vehicle goes straight - equal torque to both wheels and equal rotational speed. But when the vehicle turns, these two pinions rotate to allow a variation in wheel speed.

Open differentials are common and do an excellent job when traction is good. However, when there is also significant change in the traction conditions, then the open differentials run out of capability. For instance, in icy conditions, the torque is still evenly split across the wheels. If one of the wheels has traction and the other has none, the diff will continue to send half the torque to each. This can make driving very difficult. Similarly, if one wheel comes off the ground, say while off-roading, an open diff will be unable to react and help out. Which brings us to the more advanced diffs - limited slip, locking and electronic diffs that we will discuss next month.