Second race of the 2014 Formula E concludes in Putrajaya

We are in Putrajaya, Malaysia to witness the second race of the Formula E series. Formula E races are a completely different ball game from the regular F1 or MotoGP race. The first thing you notice is the lack of sound. The Formula E machines, no offense, sound at best like a cranky Maharaja mixer. We got to hear them during the practice session. Formula E personnel though say that this allows onlookers to have a pleasant conversation and not shout themselves hoarse to be heard unlike in F1. But why have a Formula E at all when you have other forms of exciting motorsport already. Here's why.

Formula E is a clean race in the sense that the only trailing residue from the race is, well, the smell of burnt rubber. In this race format, there are no multiple tyre changes except when the car goes into the pits with a puncture. Instead, each driver has to make do with the 18-inch low profile all-weather rubber tyres and unlike F1, there are no jackets to warm them up. There are 10 tyres assigned to each car in a particular race while two tyres (one front and one rear) is carried forward from the last race. Also, drivers change their cars when they have a pit stop, not the battery. 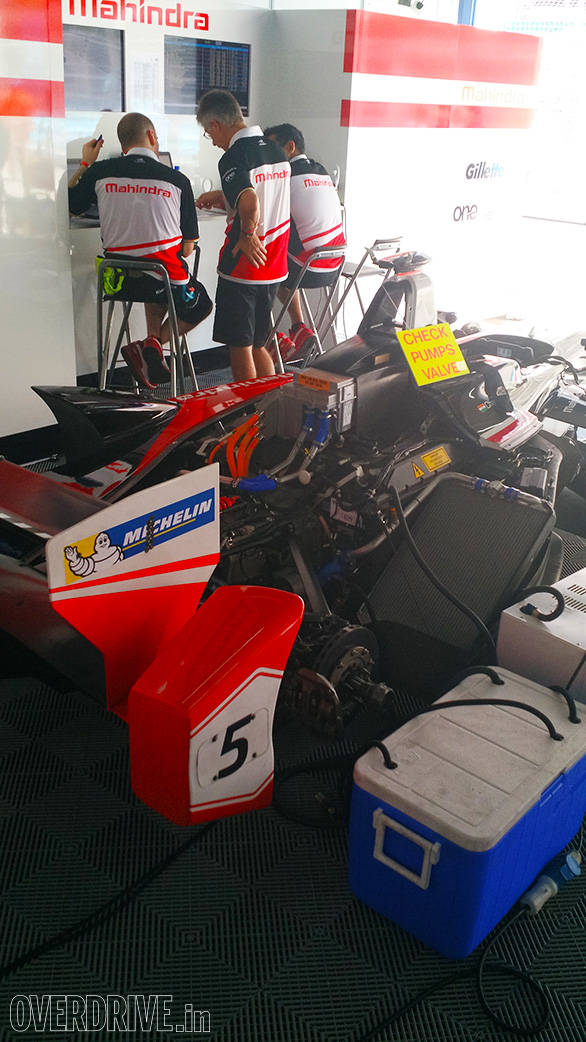 The car is being charged right now. During the race, charging is not allowed and instead, power supply to the pits is cut off

There are 32 laps in all, with the designated pit stop usually at the halfway mark or when directed by team strategies. Two drivers can participate from one team, with both (drivers and team) scoring points for the respective Driver and Constructors' title.

Back to the race then. The qualifying happens on the very same day as the race. So on Saturday, four groups of five drivers each are given 15 minutes to set their fastest lap. Team Mahindra Racing, the only Indian team in the Formula E had its racers Bruno Senna and Karun Chandhok in group one and two respectively. Nicolas Prost once again claimed the pole position followed by Oriol Servia and Sam Bird. Karun Chandhok set some very good lap times and ended fifth while Bruno was seventh. Prost however was relegated to being eleventh on the grid following a penalty for his Beijing crash with Nick Heidfield. This is why, Prost later revealed, that qualifying at pole was important for him and his team so that he didn't start too far down the grid. 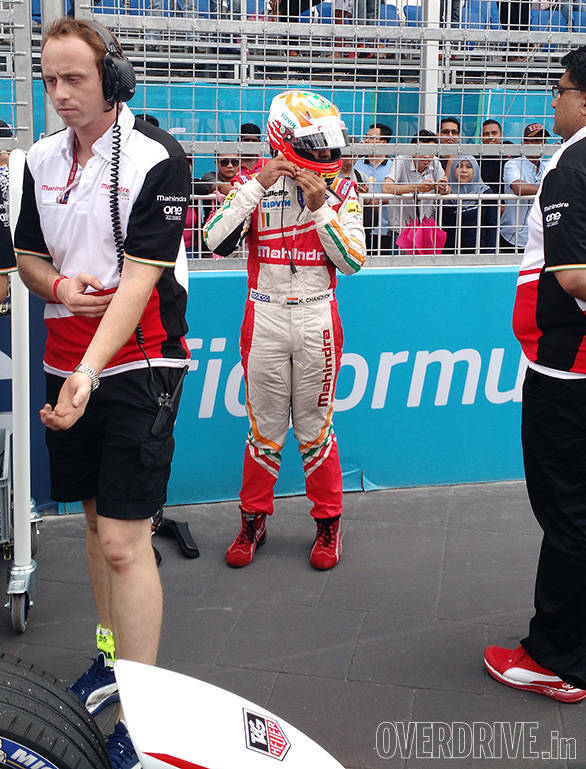 In the qualifying session, while you are allowed to use the full 180PS from the motor, there is a clause that states that at any given time, the maximum power you draw from the engine should not exceed 28kW. Jerome d'Ambrosio of Dragon Racing was initially second as per the qualifying timings, however, he violated the aforementioned rule and hence was sent to the back of the grid. Sebastien Buemi too was penalised and ended up being second last. The final grid for the race had Servia, Bird and Abt in the first three positions. 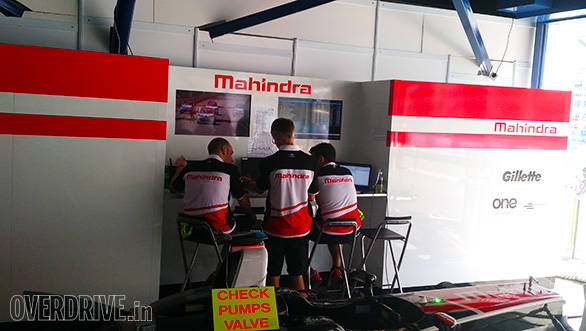 Race engineers analysing the results after the shakedown on Friday

At the beginning of the race, Sam Bird dominated the proceedings. On the opening lap, the BMW i8 security car was deployed as Katherine Legge had a collision with Michela Cerruti. The former was trying to edge ahead from the inside but lost control of the back end of her car which in turn caused Cerruti to spin out. Shortly thereafter at turn 10, the safety car was again deployed as Matthew Brabham crashed into Nick Heidfield. Meanwhile the Mahindra Racing drivers stepped up their pace. Karun especially looked good when he overtook Abt on the opening lap. Abt later said that his car was giving him problems right from the start and this contributed to his slow pace. Bruno also quickly overtook Abt to gain a position. After the safety car was taken off the tracks, Karun quickly overtook Oriol Servia and gained third position. He looked good to take on the second spot from Jarno Trulli too, however the pit stop played spoilsport to Karun's chances. Post the race, Karun said that his regular mechanic suffered a sun stroke the previous day and hence was hospitalised. The rookie technician in his place struggled for a bit while putting on the harness of the replacement car. This cost Karun a good 14 seconds and hence a place in the top three as well.

Bruno in the meanwhile looked good before the pit stop and made use of his FanBoost, his second in the series. FanBoost is an online social media gimmick which as Alejandro Agag, CEO of Formula E puts it, has been added to "attract young people to the sport". In the race, each car is clipped to a 150kW power output, however a FanBoost voted by fans allows the driver to use a Death Race style of toggle switch to raise the power to 180kW for five seconds. Bruno used it the first time to move in on Nelson Piquet. The latter though was quite ahead and the temporary boost in power didn't help Bruno gain places. However, after the pit stop, he used the FanBoost on arch rival Nicolas Prost and this time, he managed to sail past him successfully. This though didn't translate to a podium for the Brazilian as he tried to overtake Buemi on the last lap and instead ran into a wall. However, full credit goes to Sam Bird for keeping a cool head and finishing on top of the heap. He was in fact the only driver in the race who raced for 19 laps in a single car. This strategy worked for him as he was able to maintain his lead throughout. Beijing race winner Lucas di Grassi also displayed exemplary driving skill to finish on second after starting from ninth on the grid. But it was Buemi all the way, who started from nearly last on the grid to pull through and bag a podium finish. 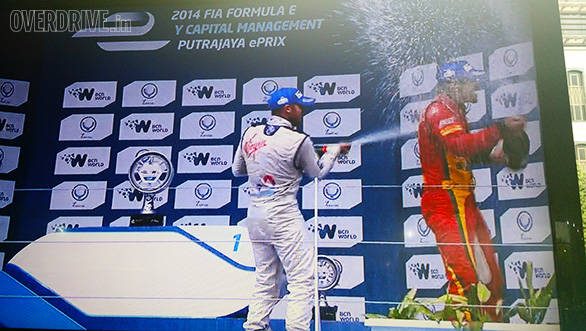 Di Grassi still leads the championship standings with 43 points while Karun Chandhok is on a joint third position at 18. The next Formula E race will be held on December 13 at Uruguay.

More from OVERDRIVE on the Formula E:

A few thoughts on Formula E

Here's why Formula E is important