The Lodgy is actually Rohit's longtermer, but since he can't get enough of his brand new Daytona, I've been spending a few days with the big Renault. First, I helped a friend move a disassembled double bed that easily fit in the Lodgy. The rear seats fold nearly flat with an easy release mechanism and liberate a huge amount of space. Shortly after, a holiday with the extended family ensured that the Lodgy's seven seat capacity was well used. The middle captain seats tumble to let passengers get into the rear but you have to push the front seat very far forward for that and it is tedious to have to readjust your driving position every time someone needs to enter the third row. I come from a family of tall people but everyone remarked how spacious the Lodgy was despite not feeling like an excessively large car. My 6 foot tall uncle said that the last row was spacious, but not quite as much as the Innova he recently sat in. He did admit that the ride quality was very pleasant. 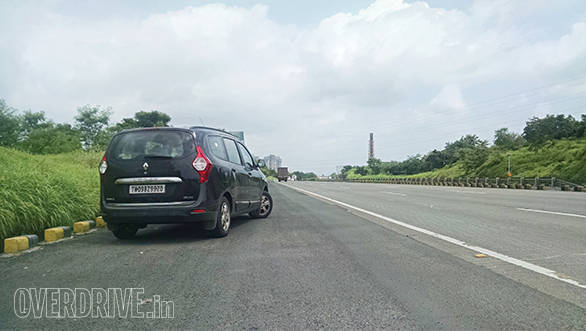 I enjoyed the Lodgy on the highway since it feels very similar to the Duster  effortless and bulletproof. Strangely, the Lodgy feels older than its 2,000 odd kilometre reading on the odo might suggest. The cabin is already producing a few squeaks while the rear suspension is sounding a little loose. I also noticed the front passenger window vibrates at high speeds producing a loud hum. This is the second Lodgy that we've discovered this in  something Renault should look at. We're sending the Lodgy back to Renault to take care of these issues and hopefully it will be happy sailing for the big people carrier after that.