I won't blame you if you have never heard the name 'Heidenau' when looking for tyres. I hadn't either, until someone from the Triumph Tiger owners group recommended me a set after I put up a query regarding 50/50 tyres for my Tiger 800 XRx for road and trail use. In fact, even the blokes at Heidenau were surprised to hear about the brand's reach in India, after I wrote to them to find out where I could buy a set from. I learnt that the company was set up in 1946 in the town of Heidenau in Germany and is a brand known for making tyres for scooters, sidecars and vintage motorcycles. They make tyres for adventure motorcycles too and the K60 Scout that was launched a few years back has given rise to a cult following amongst adv riders around the globe. With no official dealer for Heidenau in India, the company was kind enough to facilitate the sale of a pair of K60 Scouts through a dealer in Germany during one of my trips to Europe. The tyres are available in India through unofficial channels and cost anywhere betweem Rs 35,000 - 45,000 depending on the spec. 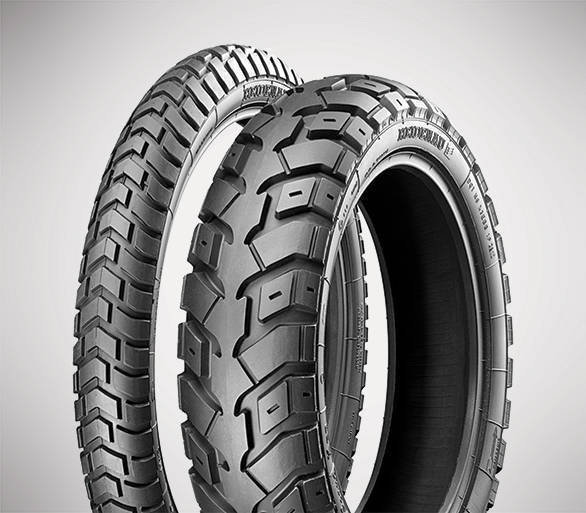 Available in 17, 18, 19 and 21 inch diameters, there is a set of K60 Scouts available for most adventure motorcycles. My XRx uses a 100/90-19 front and a 150/70-17 rear and I run them at 34psi and 40psi respectively - approximately 2psi lesser than the recommended pressures, since the latter often makes the bike feel bouncy and overinflated. The front tyre is H rated (good for 200kmph), while the rear gets a T (190kmph) - which is pretty much the speed limit for the entire K60 Scout range. So those looking to break land speed records with their adventure sport motorcycles will need to look elsewhere.

Unlike most other 50/50 tyres, which get a square-knob pattern, the K60s use chevron shaped blocks. These blocks are larger than usual and are also placed closer to each other than conventional knobbies. The advantage is a wider contact patch when riding on tarmac, which in turn gives better grip and reduced humming that is peculiar to off-road tyres. Moving from road tyres to the 50/50 type could make you uncomfortable at first. The front can feel skittish and wallow-y at first and the bike tends to tip in sharper than expected. Due to a relatively more squared-off profile than typical road-biased tyres, turn-ins aren't as progressive. It needs getting used to, but the learning curve isn't as sharp on the K60s as compared to conventional off-road tyres. The grip around twisties is surprisingly good too and I have never had a problem carving precise lines and hitting the right apexes. In a nutshell, the Tiger still enjoys its street-naked alter-ego.

Get off the black stuff and the Heidenau rubber still continues to impress. The rubber is quite hard and therefore punctures or cuts aren't frequent. In fact, I personally haven't encountered a single puncture on the K60s till date. The sidewalls are surprisingly stiff too, making it quite convenient to drop air pressure for off-road use. The downside is that the stiff sidewall can be harsh on the rim (especially cast alloy wheels) when you hit sharp bumps or potholes at speed. 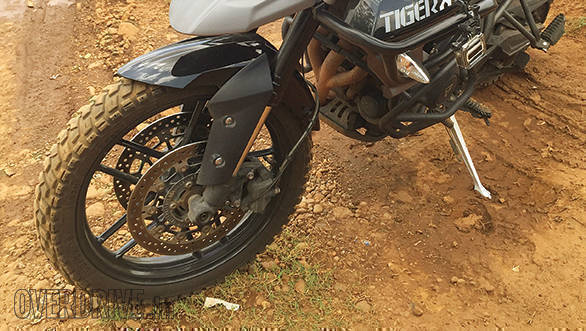 Despite the chevron blocks being bunched closer, there are enough gaps and edges between them to plough through sand, pebbles, rocks and ruts. It tackles slush pretty well too, but clay is its enemy. More so when the tyres are shod on a heavyweight like the Tiger. Some say that the competing Continental TKC80 do a better job at digging through clay and slush, but the TKC shod Tigers that participated at this year's Pune Off-road Expedition had a contrasting story to tell.

Tyre life and road grip are inversely proportional, but Heidenau seem to have found a magical compound that achieves both - giving them the cult following we mentioned earlier. I ran my set for almost 14,000km of (hard) road and (moderate) trail use and the tyres still looked way fresher than the previous Pirelli Scorpion Trail set that ran for almost 10,000km before the inner lining became visible. The squared profile on the K60s also makes for a more evenly distributed wear as compared to typical knobbies. My set of Heidenau tyres have now been passed on to my colleague Aditya, who has already toured over 2,000km on them and they still refuse to show signs of going kaput anytime soon. Without a shadow to doubt then, the replacement on my motorcycle is another set of K60 Scouts.