Although it's not something that affects me, a vast majority of two-wheeler riders in India detest helmets for the discomfort they cause whilst wearing one and riding in our hot climate. Sweaty head, sweaty hair, claustrophobia. The reasons for refraining from wearing a lid are alarming and hilarious. I've always worn a helmet, no matter the weather or occasion. But there's no denying that some of the issues, like excessive heat or the visor fogging up in the rains are bothersome.

Over a year ago, BluArmor, a Bangalore based startup introduced the BluSnap, a portable helmet cooler. Think of it as a household cooler that's shrunk in size. It had a separate compartment to store cool water and a main section that housed the fan that channeled a steady stream of air, via ducts to the inside of the helmet. A rechargeable battery powered the fan. It was held in position using an elastic strap that wrapped around the helmet. While it was a great concept and worked effectively to some extent, it was heavy and cumbersome. Plus you had to hunt for water once the reservoir runs dry.

Taking these issues into account, the company has worked hard to develop an all-new helmet cooles, BluSnap 2. Fresh off the box, the BluSnap2 looks compact, sleeker and much more modern than the first product. It is also significantly lighter than the previous model and that's always a good thing on something that's attached to a helmet.

The small size is courtesy of a lighter battery and the elimination of the water reservoir. But this device works on the principle of evaporative cooling, which requires water. The solution is the special, water absorbing membrane that can be saturated in 10 seconds only. The membrane slots into a designated space, behind the fan and voila! You've got a steady stream of air flowing on your face. And we all know how good that feels, right? There's also an integrated a filter that blocks away dust particles.

The attachment mechanism too had evolved and you no longer have to fidget with the elastic strap for a secure fit. Mounting the BluSnap 2 includes attaching a plastic strip with a 3M adhesive on one side. The strip has a notch that receives the clip which holds the entire device. It can fit any full face helmet, claims the company.

The attachment is stronger than what one may suspect and after riding in myriad weather conditions, its never come loose. The device also does not move around at high speeds, however, in the event of a crash, it is designed to break away.

I've used the device on regular commutes to office, a route that involves choc-a bloc traffic, free flowing traffic and a zippy, 5km highway stretch. Now, that we've established the situations that the device has been subjected to, here's how it fared in the real world.

Charging the device takes about two hours and the battery lasts up to 10 hours. Now, that's pretty good battery life, and considering my two hour commute per day, I had to charge the device every five days.

There's a power switch at the top of the device that just requires a single click to switch on the fan. That said, it takes more than a couple of presses to activate the fan with a gloved hand. It, hence, is ideal to switch on the device before wearing gloves.

The moment the fan comes on, there's no escaping the faint buzz that you hear as the fan spins. It is not bothersome at all and i got used to it after a couple of rides. Plus, once you are on the move, you don't hear the buzz at all.

The acid test was in the peak summer of Mumbai and with the ongoing Metro work, traffic is mostly crawling. While the feeling of cold air hitting your face is present, the volume is greatly reduced in stop and go traffic. I would have liked it if there was some sort of a regulator to alter the fan speed. It would make a big difference whilst stationary with the sun beating down hard.

On the move, the cooler works just fine and the visor remains clear during the rains, which again is a big boon. Remember to keep the membrane hydrated every hour and a half, and the stream of cool air continues.

BluArmor claims that the temperature inside the helmet drops between 5-16 degree celsius. Given the 38-40 degree summer in Mumbai, we saw a temperature difference between the inside of the helmet and the outside ranging between 5-7 degrees. It may not seem as a big difference on paper but lower than ambient temperatures are always welcome, right? But, as I've said before, an adjustable fan speed would make a big difference.

On the whole, the BluSnap 2 is a big improvement over the first gen cooler and pretty effective in our conditions. 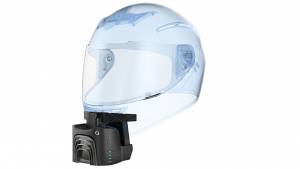