OD Garage: The Honda CB Trigger leaves us after 8 months and 9500km

India Bike Week came calling this January and we all wanted to make the ride to bike week on two wheels. But as work schedules would have it IBW overlapped with our issue closing dates and so only Shumi and I could make the trip to Goa. I had the option of a litre-class inline four or a middleweight L-twin but both those plans fell through at the last minute and I ended up on the Honda Trigger. This was not too big a disappointment as last year's trip to IBW on the Impulse was simply a blast. The first 450km of my journey was a solo ride to Tarkarli where I caught up with the Helmet Stories group who were taking the coastal route to Goa. The highway riding was more or less a flat out drone on the little 150cc but once I hit the twisty bits the Trigger was smooth sailing. Its chassis is a great handler around corners and while the soft suspension setup didn't allow me to push it very hard, it absorbed the bumps and potholes well. Besides this was a long distance cruise and so the soft suspension setup actually made for quite a comfortable ride. 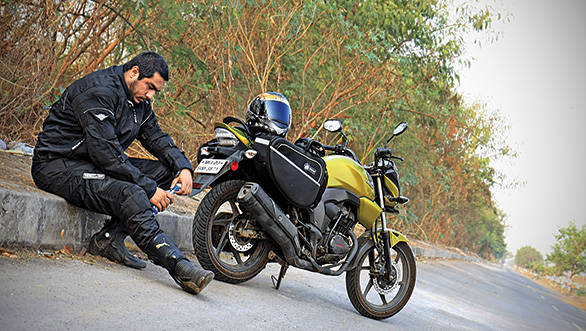 With the throttle pinned on the highway I was having to fill up every 320km but I can't tell you the mileage because of the silly design of the fuel tank. There is a sleeve inside the tank that doesn't allow air to escape easily and so filling up is a lengthy process and when you try to fill it up to capacity there is a hidden overflow point that's actually two inches from the top of the tank. This firstly wastes at least half a litre of tank capacity and secondly as you don't know where the overflow valve is, it's easy to over fill and then have a puddle of fuel under the bike as the excess slowly leaks out through the drain pipe. It also means I have no idea how much fuel went into those 320km and the delay was really frustrating as I was trying to make up time on the highway. That being said the ride was a fitting farewell for the Trigger that left us at the end of January.