Team OD Updated: June 27, 2014, 08:37 PM IST
Sarah Martin is as energetic a person as one would expect the director of operations and security of the Singapore GP to be. And it seems like without the sort of energy that she has, running an event like this would be near impossible. The Singapore GP is not positioned as only a Formula 1 Grand Prix, but instead a week-long festival of sorts. And it is for this reason that it throws up so many challenges to the organisers. The logistical nightmare of running a street race at night, coupled with crowd control and the festival itself all mean that preparation for the next race begins as soon as the first one is over. Speaking to OVERDRIVE Martin said that the only way to manage the event is to view it not from a distance as one large event, but instead to break it up. Reporting to Martin over the course of the race week are 1,000 police officers and as many as 1,200 private security officials. But instead of looking at it in those daunting numbers, the organising team at the Singapore GP just breaks it into more manageable numbers - the race venue is divided into four zones and ten subzones and when viewed like this becomes somewhat easier to handle. We asked Martin a few questions about what it is like to run an event of this scale:

OD: In the lead up to the first Singapore GP in 2008 did you go and visit a lot of the other races?

SM: I went for a few races - like the Australian GP and Abu Dhabi. But there was no real learning because for a street race it's totally different. Not a single bit of operation can be replicated. That's why we're so unique and even when Abu Dhabi wanted to do a race and Australia wanted to do entertainment and even Qatar, they all came down for a research trip. When they came to Singapore they said you really can cut on pace and everything is so unique, everything is so different, it's so hard. And the thing about any new race is that there is no guide book. So for us in 2008 we were planning and executing at the same time. We did not have a rule book. We had this beautiful site and we need to make the best of it. It was the first time we were working with this site and we could fly as far as our imagination allowed us to.

OD: How long does it take for you to start preparing for each race? As soon as one gets over?

SM: As soon, yes. Early bird ticket sales start immediately. It takes a month to wrap-up the event and then we are planning the next one because every year we try and introduce new things. So technically we are our own worst enemy because we think what else can we do now. We have as many as nine stages. When you think about it, if you take all the entertainment content out of the race, you have a full festival itself.

OD: How is the Singapore GP unique from other GPs, other than the fact that it is a street circuit?

SM: The Singapore GP has its unique aspect - there are no two ways about it - we are one of three races in Asia. It's a night race and it is something quite distinctive to race under those lights. We are also one of the few events in Formula 1 where we have so much going on, on track as well off track. This year we have got six to nine stages, over 500 entertainers, we have 30 pop-up restaurants. There is actually something to do and something to  see and I think this is the unique quality about the Singapore GP.

OD: And with regard to the circuit itself?

OD: But to attempt to take on a race like Monaco, that must be a huge challenge.

SM: I think the fact that we race under the stars makes a huge difference. The fact that it's also a street race but the way we created the race that up-close personal feeling you get, the feeling you walk away with is very distinctive. Plus unlike the other street races we don't do just a race. We are more than just a race and we are a full-fledged weekend and from 3:00pm all the way to 12:30am. In between the races, off track, on track, there is always something to do. I think that's what makes us distinct from other races.

OD: How do you manage the challenge of security and deployment of the Safety Car, etc?

SM: We take the safety of the drivers very seriously. We have got multiple contingency plans to make sure that they are taken care of. There should not be any incident. By having said that we also do agree some of our turns are very tight and every year we do a little bit of something to make the difference. Some of our turns you just cannot duplicate, and drivers who come back year on year have tried and tested it. So I think it is great for them, great for us  and it's great for the audience. Safety is a huge deal. But safety is a huge deal through out the circuit park. You know we have 87,000 people who come each day as per last year. We make sure they are in a safe environment. They are very close to the race track and we make sure every single precaution is taken care of.

OD: What challenges do you face when organising a grand prix within a city in terms of permissions and the like?

SM: Actually our partners are the government. You know we have Singapore Airlines. It's great to have them on board. Every year with the tourism board we make sure the message goes out. We work with almost every known government body to make this race happen. The level of government cooperation that happens is incredible. You name it: we work the army, we work with the police, we work with the land transport authority, the national environment agency. Every single agency that is a parent, right down to PUB which is the utility board, because we have water transport. I mean it's incredible. But the level of cooperation, I think is something that we are entirely grateful for. No other government will support such a race of such a great magnitude and complexity and give us the time and attention that it needs. But that is exactly what it takes, you know it takes that time and attention and it takes the government to say let's do this and with everybody having the same goal and aim. I think that is something wonderful Singapore had managed to achieve.

OD: What about the logistics?

SM: Well every year  there are logistical issues. Because we try to introduce new things and we know that something will go wrong. But it's attitude that makes the difference. You know when something goes wrong, let's find a solution. No challenge or no problem is without a solution. The entire force behind the grand prix has the same attitude and I think that's what solves our battle really.

OD: What is it like interacting with Formula One Management?

OD: Do you think that the regulation changes will have an impact on the Singapore GP as a race?

SM: I say, we shall see. Because each race is so different. The impact of the regulations are quite different from race to race. Whether it's a regular circuit or a street circuit and it's not for us to comment until the day of the race. To see really the the impact. I think personally, the Formula 1 race in itself is amazing. You know the level of technology. It's like an art form in high speed. That and the sound of an engine will always make an impact. For how it impacts the race, let's look at day one and we will see.
Tags:    Singapore GP |  Formula One |  motorsport |  Formula 1 Grand Prix | 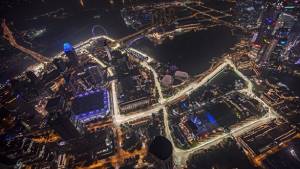