How the 1,020PS Tesla Model S Plaid is rewriting the EV rulebook

A short while after the production-version of the Rimac Nevera, its 1,914PS quad electric motor electric hypercar, broke the internet, Tesla has officially begun deliveries of its promised hypercar-beating sedan, the 1,020PS Model S Plaid priced at $131,000 or just under Rs 90 lakh (directly converted). The similarities are as astounding as their differences - one's a limited-run, two-seater electric AWD hypercar capable of mincing the 0-60mph run in 1.85s (priced at 2 million, or Rs 17.8 crore), the other an AWD family sedan that seats five that does the same feat in 1.99s, and can then go on to 322kmph. 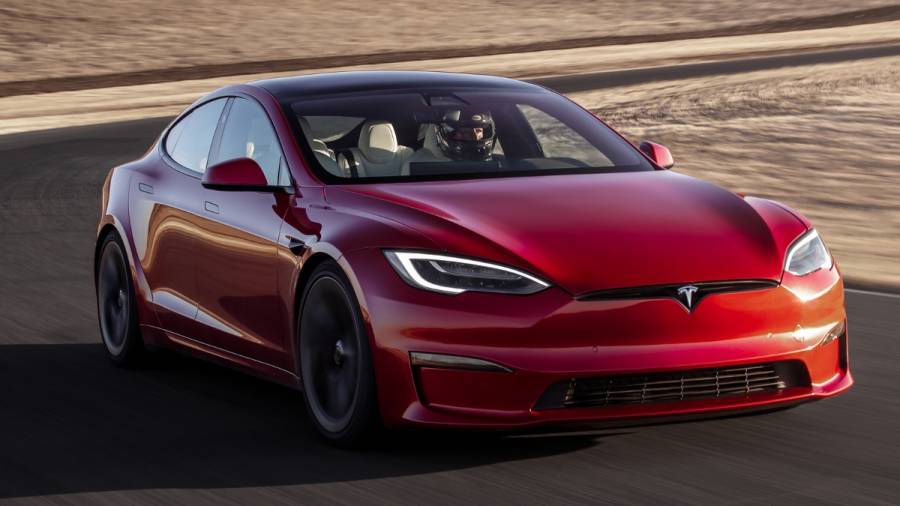 It's a little less black-and-white with the performance figures though, since the Tesla's times have a 1-foot rollout time subtracted from them, an allowance US manufacturers have begun to exploit which essentially amounts to a rolling start, with the timing started only when the car has moved a foot to account for launch control systems. Everywhere else in the world, performance figures are quoted in 0-62mph, or as we know it, the 0-100kmph metric. For reference, the Rimac Nevera manages a 0-100kmph time of 1.97s. 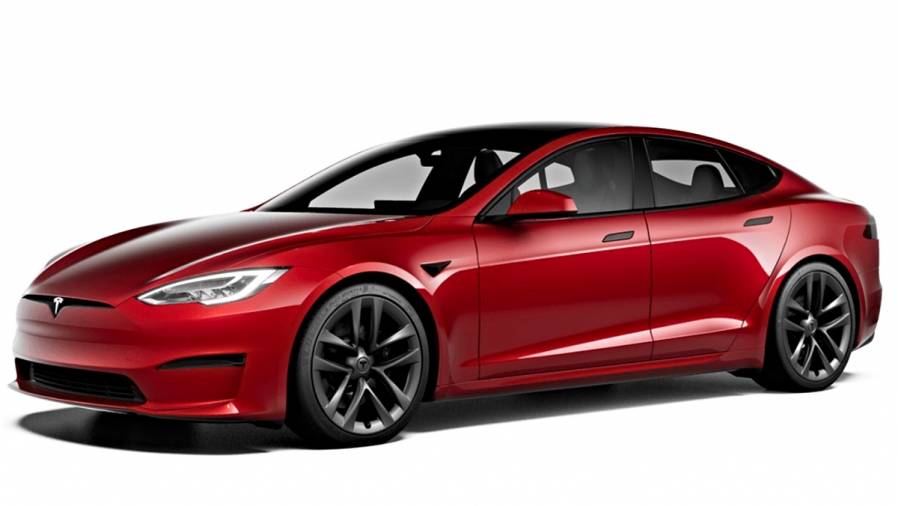 Still, the Tesla Model S Plaid is impressive. Comparing quarter mile times, the Nevera stands at 8.6s, and the Tesla at a claimed 9.2s. Both are really something considering the 2,150kg kerb weight for the Nevera, and the expected 2,250kg kerb weight for the Plaid (unconfirmed). Driving range? 547km for the Nevera (WLTP), and 628km for the Model S Plaid (EPA), though the optional 21-inch wheels drop that figure to 560km.

While the Model S Plaid was expected to use the new 4680 battery cells, it's still unclear whether the Plaid did indeed make the switch from the 18650 cells currently in use in all Tesla battery packs. Though Elon Musk, Tesla CEO, did call the Plaid's batteries "the most advanced battery to date" but could be referring to its improved thermal performance, likely to be a huge contributor to its ability on track. Earlier, Musk had confirmed new battery tech, and larger capacity batteries than the 100kWh pack in the range-topping Model S and X, but once again, those details haven't been made public. 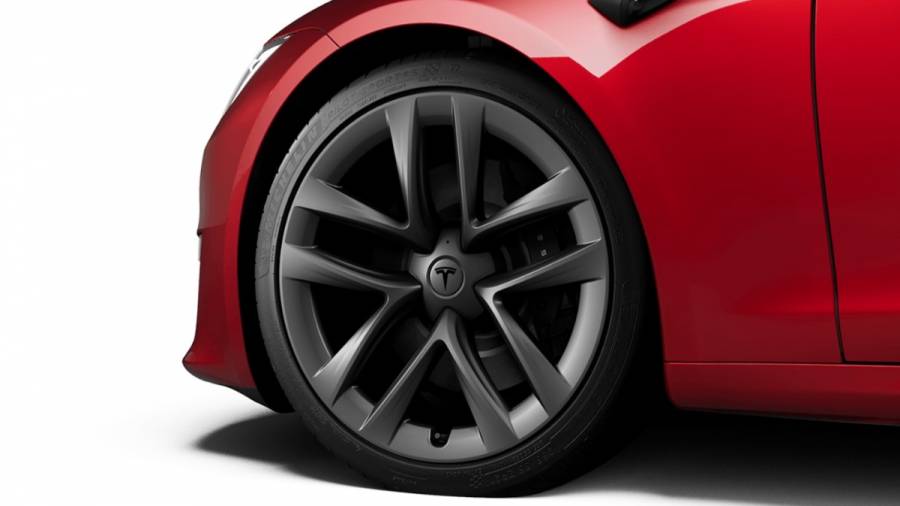 What we do know is that the Model S Plaid may be the first all-wheel drive Tesla to use permanent magnet motors for all three of the motors, with one on the front axle and two at the rear, enabling torque vectoring. Permanent magnet motors have better inherent efficiency, and less operating losses, than induction motors that Tesla uses to drive the front axle in some of its other models. The Plaid also debuts carbon fibre sleeved rotors, ideal for sustained high-temperature operation thanks to their low thermal conductivity versus metal sleeved rotors, which makes the motors themselves more efficient and able to sustain peak power right up to the car's top speed.

The Plaid also becomes the first Tesla to breach the 200mph/322kmph mark, though the upcoming Tesla Roadster is expected to do 250mph/402kmph, which is closer to the Rimac Nevera's 412kmph top speed. The Model S Plaid also features an updated heat pump that'll help it perform better in cold conditions, increasing up to 30 per cent of range otherwise lost due to low temperatures. What no doubt helps the Tesla sedan, both in its range and top speed, is the updated model's 0.208Cd, which beats the previous world's most aerodynamically efficient production car, the Lucid Air with its 0.21Cd. 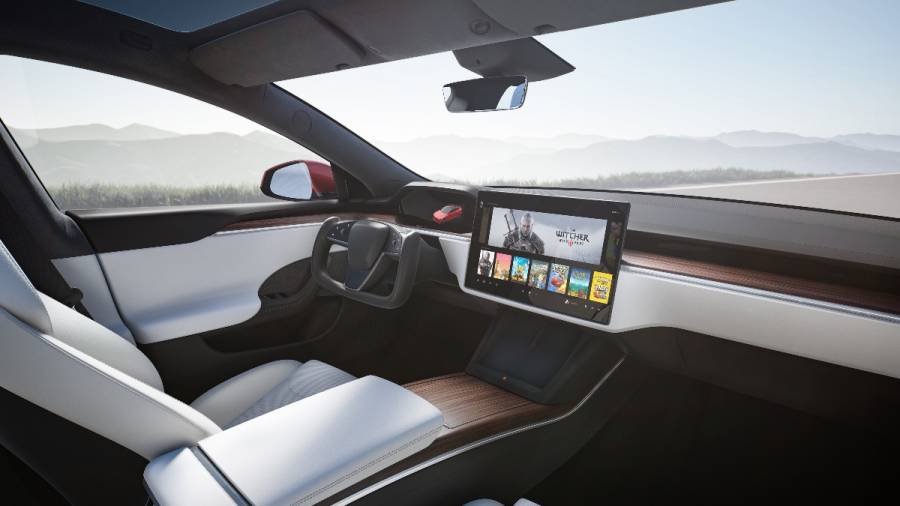 In other news, the Model S Plaid also introduces an updated yoke steering, with ridged sides that will help drivers reach the scrollers on the steering easier. It also features an updated second row of seating, with more space for three adults, and a central rear seat 8-inch entertainment screen. The processing power in the updated Model S goes up to 10 teraflops now with wireless controller support, and Tesla claims it rivals current-gen gaming consoles like the Sony PS5 and Microsoft XBox Series X. 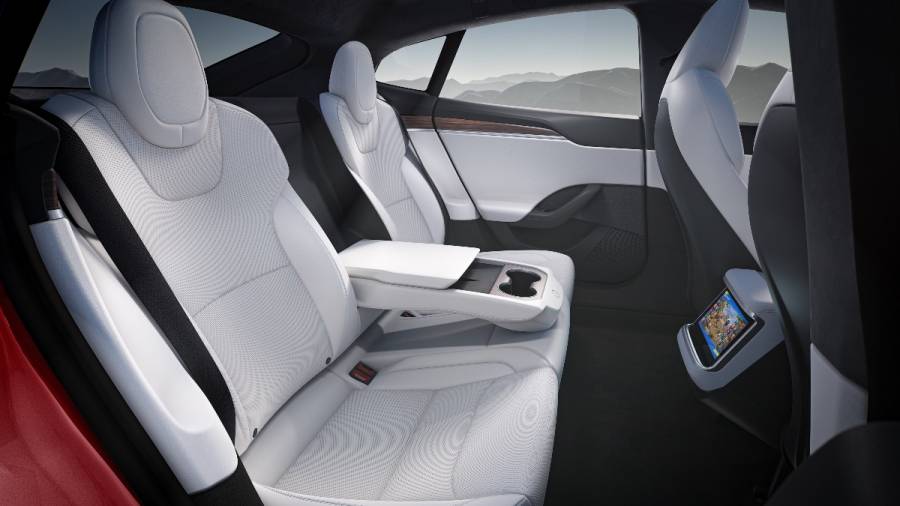 In fact, screenshots of The Witcher 3 title plate displayed on the main 17-inch touchscreen are on Tesla's website itself, and Musk has also tweeted that the in-car processor can play Cyberpunk 2077, a game that's been notoriously system intensive on even high-end, dedicated gaming PCs. We'll know soon enough, but as it stands, the Tesla Model S Plaid is a very impressive electric car that'll no doubt force other manufacturers to sit up and take notice.