It's a very simple mission: steal all of the jewelry from a high-class jewelry store. There are a number of ways Michael and Franklin can go through with this - going in smart or going in loud. Michael decides that going in smart would be the better approach, and thus starts arranging for some knockout gas to pass through the store's ventilation. Once everyone's knocked out, they have a couple of minutes to clean out the store before an alarm triggers. This is just the first of the epic missions you will get to play through in Rockstar's latest offering - Grand Theft Auto 5.

After the somewhat-disappointing GTA 4, which was salvaged by its amazing story and stellar expansion packs, Rockstar seems to have returned to form with GTA 5. The game takes us back to the city of Los Santos and the area surrounding it, named Blaine County. While it isn't exactly the biggest world we've seen in gaming, it's far from the emptiest. There are tonnes of things to do with any of the characters. Not only are there a story and side missions, GTA 5 also has random events that happen whenever you drive past areas. These are some simple events that give you a chance to be the good guy (a rarity in these games) by, for example, helping a woman who has just been mugged. 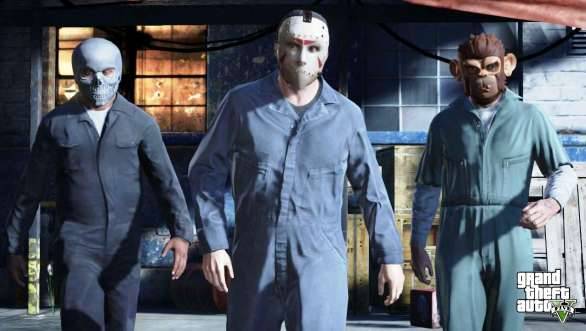 The world is huge, though, and quite pretty. The decadence and urban decay of Los Angeles has been perfectly captured and caricaturised in Los Santos. It's also much better than the (amazing) rendition of New York we saw in GTA 4's Liberty City. It isn't just a mess of buildings and roads anymore. The areas in Los Santos are quite varied, from the hilly and posh Vinewood to the downtrodden ports. There is also a great reference to the earlier San Andreas with a whole mission taking place on Grove Street (right outside CJ's house in San Andreas).

The outskirts, countryside and desert-like areas of Blaine County, aren't slouches in the variety department either. It's got everything from coastal towns to serial killer hideouts in forests to a desert town comprised almost entirely of trailers. These areas are brimming with things to do. You can buy the sonar company in the sea-side town of Paleto Bay and help them clean out the surrounding waters of nuclear waste, or as Trevor, you can pick up random people and deliver them to a mysterious cult in the mountains. For more traditional sources of fun, you can take part in triathlons, dirt bike races and some spelunking if you like.

While hardly anyone really plays Grand Theft Auto games for their plots, the stories have been of considerably high quality since the Grand Theft Auto: Vice City days. GTA 5, however, may just have the best plot in the franchise. All three characters have their own backstories and motivations - Michael is a retired criminal, who is pushed back into a life of crime because of some mistakes he makes in his fits of rage; Trevor is Michael's old and psychotic friend who holds quite a grudge; and Franklin is a typical gangster who is tired of the life and wants to move up the food chain. All of their stories have been believably pulled off, and you can't help but empathise with at least one of these characters. 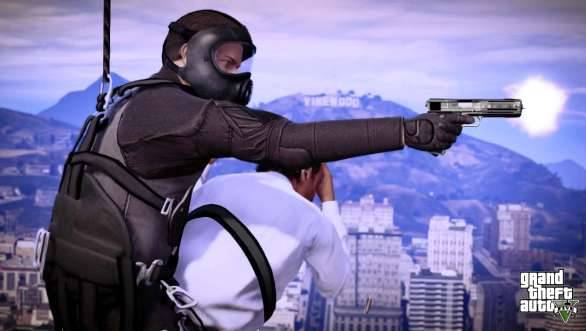 Rockstar may have had a stroke of genius when it decided to have three protagonists in lieu of just one. The three characters - Michael, Franklin and Trevor - all represent GTA-specific character tropes. Michael, for instance, is the typical GTA protagonist, who has retired after a successful run at crimes. Franklin is like a GTA character that has just started out in the world. Trevor is the most interesting of the lot. He symbolises the type of player who just plays GTA games to kill as many people as he can. This is well-explored; the game shows us exactly what kind of people these players would be if GTA was the real world.

The narrative itself has taken a much lighter turn, especially when compared to GTA 4's Lost and the Damned DLC. Los Santos isn't nearly as dreary and depressing as Liberty City was. Instead, it's bright and colourful. It has vibrant beaches and neon-lit strip clubs. The characters are much happier with where they are in their lives than Niko Bellic was even by the end of his epic saga. The story doesn't really have an over-arching plotline, except for some missions with the FIB (GTA's FBI). Most of the game consists of internal squabbles between the trio and self-contained heists.

The believable world, backstories, motivations and emotions of the characters are further compounded by the ability to quickly switch between them at any time when not on a mission. The animation for switching is a bit short (even shorter if they're in the same area), and you're immediately thrust into the life of a different character. Whenever you switch, you catch these characters as they are doing something they would usually do if they were real people. 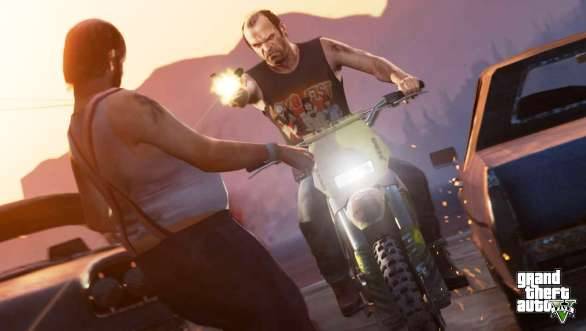 All the characters live their lives when you're not playing them.

You'll randomly catch Michael in his existential hellhole where his son and daughter don't respect him as he gets into a screaming match with his wife. Trevor, more often than not, is lying drunk in some corner of the world, and curiously, lacks his clothes and is surrounded by fresh corpses. Franklin will contemplate his old life in his house in the hills or will be walking out of a medical store smoking medical marijuana. Not only does character switching add more character to the world, it also makes travelling across the vast Blaine County or Los Santos much easier. Bored of driving in the desert as Trevor? Just switch to Michael as he drinks his morning coffee in a Bean Machine in Downtown Los Santos.

Character switching has also been pulled off masterfully in missions. Each of the three characters has a different job to do in missions. For example, Michael mans a high-powered sniper rifle with which he has to take down the engine of a plane flying by. Once this is done, the game quickly switches to Trevor who has to chase the plane down as it crashes on his dirt bike through the deserts of Blaine County. Not only does it add more variety to the mission, it also improves the pacing by a fair bit.

The game also gives you the option to switch characters at will at specific points. The much-referenced mission where the trio has to kidnap a person from the IAA (the GTA universe's equivalent of the CIA) comes to mind. Trevor pilots a helicopter as Michael rappels down the side of the building to kidnap the person. Once he breaks in, there's a short gunfight. At this point, you can either continue killing people as Michael or switch to Franklin, who stands on the roof of a nearby building and gives Michael covering fire with a sniper rifle. Mission structure in GTA games have never been this good, and it comes mostly thanks to Rockstar's insane decision to have three protagonists instead of one. 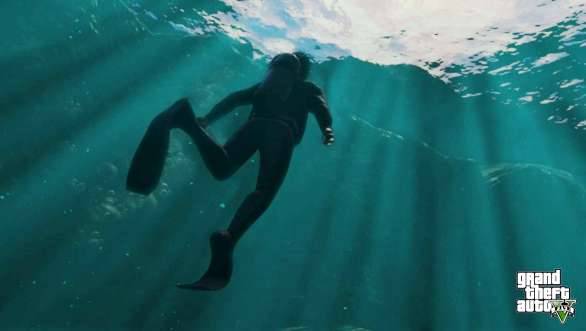 Yes, you can go underwater, and yes, there are sharks.

The driving too has been improved by a mile. Gone are the sluggish and slow controlling vehicles of Grand Theft Auto 4. Rockstar has instead taken hints from its own Midnight Club series as well as its competitor - Saints Row. Cars handle fluidly, and even if it's a big and heavy vehicle, you won't have the same trouble driving as you did in GTA 4. Vehicles control snappily and pick up speed quite well. This is compounded thanks to the modification system where players can upgrade any vehicle they pick up off the street. Planes make a comeback too, after making a brief appearance in San Andreas and going into hiatus for the entirety of GTA 4.

The other side of GTA's gameplay - the shooting - has also undergone an overhaul. Gunfights aren't a chore in the game anymore. Weapons feel good to fire and the targeting and cover system have been improved considerably. With the presence of Michael's special ability (slow motion on foot), GTA 5's gunplay has more in common with the Max Payne series than any other game. Speaking of guns, all of them can be modified in a number of ways - by adding flashlights, extra grips, suppressors and extended magazines.

GTA 5 also brings back stealth, which was earlier present in a rudimentary form in San Andreas and was all but missing in GTA 4. Players can sneak around missions and knock out or kill guards with suppressed weapons. The system, while not as good as Metal Gear Solid or Splinter Cell, has been done as well as one would expect. The UI helps too. Characters making noises show up on in the mini-map, and enemies and cops have Metal Gear Solid-styled vision cones that help you plan out paths to avoid them.

Visually, we'd be hard-pressed to believe this was a current-gen game if we didn't know any better. The cityscape looks amazing, especially when you catch it during a sunset from a high-enough vantage point. Blaine County, with all of its desolation and hillbillies, also manages to look gorgeous. Characters look better too, with none of them looking as ugly as they did in GTA 4. It wouldn't be too much of a stretch to say that GTA 5 represents the true power of the Xbox 360 and PlayStation 3. 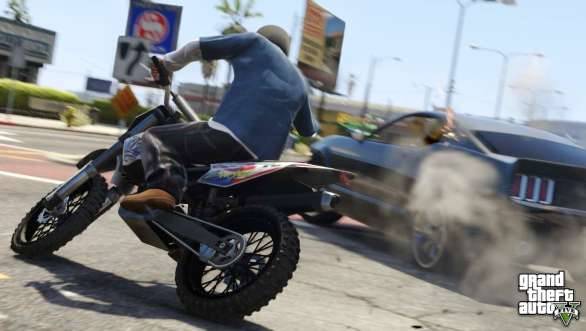 We love bikes, no doubt about that.

As is usual for Rockstar, music choice is amazing. The in-vehicle radio has stations for almost every genre imaginable, with quite a few songs from some amazing artists. For example, start Los Santos Rock Radio and you'll hear Queen's Radio Ga Ga. Switch to the Hip Hop station West Coast Classics and you'll hear You Know How We Do It by Ice Cube. Talk radio is just as funny as before, but still not as loony as it was in the Vice City and San Andreas days.

Grand Theft Auto 5 seems to be Rockstar's final goodbye to the Xbox 360 and PlayStation 3. Sure we'll be seeing games after the PS4 and Xbox One hit it, but we doubt they'll be technologically superior to Grand Theft Auto 5. With this, Rockstar has released what many will consider to be the best game in the long-running franchise. It might even convince some people to let go of Vice City and San Andreas, and instead pick GTA 5 as their favourites. Despite the lack of any compelling or halfway-tolerable female characters, the heists, characters and the world all come together to prove why Rockstar is still one of the best at making open-world games, if not the best. Grand Theft Auto 5 is Rockstar at its best.

Note: The review was first published on tech2.