First taste of the Rainforest Challenge in India

Superior temporal gyrus. I assure you that these aren't three words randomly strung together. The superior temporal gyrus is the part of the brain that scientists currently hold responsible for coming up with ideas. The more active this part of your brain is, the more likely that you'll come up with zany ideas. Standing knee deep in muck, the rain pouring down on me, watching a Force Gurkha get smaller and smaller as it climbs an impossibly steep incline, I wonder to myself whose idea this was anyway. After all, it must take a particularly err. . . superior superior temporal gyrus to come up with an event such as the Force Gurkha Rainforest Challenge. 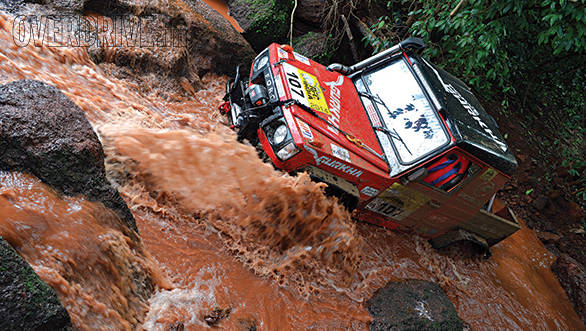 Dotting the landscape, as far as the eye can see, are 4x4 off-roaders complete with winches, snorkels and tyres the size of small houses

And then I catch sight of him, a tiny little man with a twinkle in his eye, looking very pleased with what he sees before him. A deeply forested area, with mad slopes everywhere. A raging river with rocks and a muddy bank in front of it. There's one 4x4 throwing up water as it makes its way through the river causing the crowd gathered there to cheer loudly. There's another one halfway up an incline, one door hanging open, with a winch in the process of being fastened onto a tree. There's a third that's backing down a cliff face slowly, the driver clearly rethinking the decision to tackle that particular obstacle. In fact, dotting the landscape, as far as the eye can see, are 4x4 off-roaders complete with winches, snorkels and tyres the size of small houses. And Luis JA Wee, the founder and creator of the Rainforest Challenge, surveys all of this with a smile on his face.

Let's rewind a little. First held in 1997, the Rainforest Challenge was devised to be the ultimate test in off-roading. Vehicles competing in the gruelling off-road event have to be prepared to the hilt, needing to be as fleet-footed as mountain goats in order to scale slippery rock surfaces, with snorkels that will help them ford the deepest and most terrifying rivers ever, and with winches that can help them up the steepest of inclines. But if that gives you the idea that the event is one of those 'drive over it and through it' sort of deals, you need to think again. The RFC was also devised keeping in mind the environment. Every time competitors need to winch their machines, they need to use a tree trunk protector, they aren't allowed to cut or damage standing trees, and they certainly aren't allowed to dirty the environment. Though competitors during the event actually camp in the jungles, they have to be exceedingly careful - never leaving behind a scrap of waste or dirtying water sources. 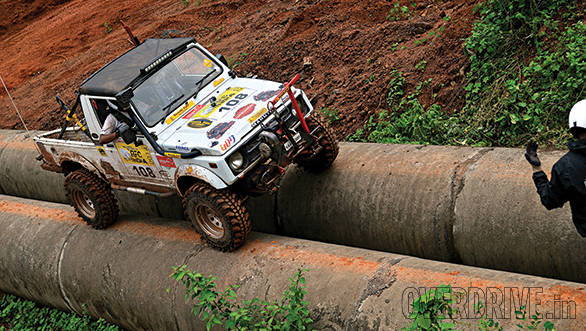 Driving on pipes - one of the more basic challenges during the initial stages of the RFC India, which prepared competitors for the challenges of the coming days

Then there's the fact that the RFC isn't merely about the machines. The event puts the competitors through tremendous levels of stress. Not only is it the driver's prowess behind the wheel, it is also the navigator's mental ability to take calls on the angle the machine needs to be placed at, the exact tree onto which the winch needs to be placed that counts. Add to that the fact that they need to camp in the great outdoors - leeches, slush, muck, mosquitoes included - and fend for themselves in terms of food and shelter and it puts things into perspective. It isn't just a challenge to survive obstacles, but it's about survival itself. No wonder then that Luis J A Wee tells the participants gathered there that they are all winners in their own right simply for having started the event. Since 2007, the RFC has expanded beyond just the 'mother event' in Malaysia, and gone to foreign shores.

At this point we'd like you to meet another intrepid adventurer, with an imagination to match Luis J A Wee's. Ashish Gupta is the founder and CEO of Cougar Motorsport and he's quite an adventurer himself. When he witnessed the RFC in Malaysia it struck him that he'd like to bring it down to India too. And given that Cougar Motorsport organises several impressive events across the country like the Desert and Himalayan Dashes, a small seed of an idea set in late last year, and resulted in the event itself this year. The location - the wet and swampy forested region in Goa.

Now, given that this was the first time that an event such as the Rainforest Challenge was being held in India, the organisers, including course director David Metcalfe, decided to keep certain things in mind. The first of which was, "Let's not scare away all our competitors!". Which is why the Prologue Leg of the event, comprising stages 1 to 12, went relatively easy on the competitors. The challenges merely tested the skills that would be required over the next few days. Basic winching, changing tyres, driving through streams and the like. The next leg of the event, Predator, was when things got more challenging. Competitors had their first taste of using winches to get them out of sticky spots, they needed to cross water during challenges that were vastly more difficult, and they needed to overcome greater levels of muck and mire. But it was the third leg of the event that truly separated the men from the boys, and it was rather aptly named Terminator. Stages 19 to 24 were held at Kumari, North Goa. The fact that to get to the stages one needed to cross a river ought to have tipped competitors off about just how challenging the day was going to be. It was probably SS24 that was the easiest of the stages - a time trial that involved competitors just gunning their machines through the course and making their way out without incident. The other stages involved more than just a single winch up inclines that were terrifyingly steep. And it was here that we saw participants beginning to falter. While the Malaysian contingent of Team Force Motors comprising four-time RFC winner Tang Eng Joor and co-driver Tan Choon Hong, and Mervyn Lim and co-driver Hamizan Bin Abdul Hamid, didn't balk at a single challenge, there were others who did. Some felt their machines weren't up to the challenge. Others tried and failed to complete the event within the stipulated time period of 15 minutes. And still more fell by the wayside - co-drivers falling down the hill and ending up with torn ligaments and the like. But we were particularly thrilled with the performance of the Gerrari boys Kabir Waraich and Gagan Sachdeva who simply mountain-goated their way over absolutely everything, proving to be the best of the Indian contingent. 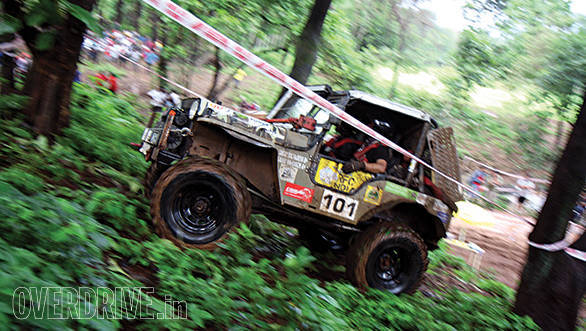 Team 101 Gerrari Offroaders, Kabir Waraich and Gagan Sachdeva were the best Indian team of the event and their performance qualifies them for RFC Malaysia later this year

And so, going into the final day of the challenge, the Twilight leg, it appeared that these three teams were the ones to beat. Given that recovery would be tough if things went wrong during the Twilight stage at night, the course director decided that the contingent would set out in the morning. The premise of Twilight was simple - go through and make your way out during the alloted six hours. As things turned out, once the competitors got to a certain point, they decided that the obstacle was insurmountable. The Malaysian contingent knew that irrespective of whether or not they completed the event or took home the 20 points for a DNF, they'd still be at the top of the standings. Although special mention must be made of Team 114 - Cedrick Jordan da Silva and Floyd Dias who were game to try and finish the challenge no matter what. Well, that's moot - no one completed the Twilight stage at the end, and the order at the top of the standings stood as was. 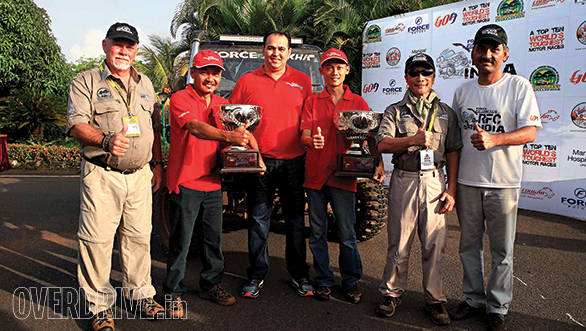 Overall, though, for a first of its kind event in the country, the Rainforest Challenge was spectacular. The fact that in six months' time, participants were able to come up with machines that could withstand the challenges thrown up by RFC India in itself says a lot. And according to Metcalfe, the progress we're likely to see before RFC India 2015, both in terms of the standards of men and machine, is likely to be massive. As massive as the obstacles he is hoping to throw their way next year, then. We can't wait!