In this edition of Caraoke, Sidharth Malhotra drives on the roads of Mumbai, with his co-star Jacqueline Fernandez, and Firstpost's Renil Abraham providing them company.

After Renil dares Sidharth to park his car at the side of a road to wave at passers-by, the young star gladly obliges, much to the amazement of his fans. Sidharth and Jacqueline also belt out songs from their upcoming film, Raj and DK's action comedy A Gentleman, including 'Disco Disco', 'Chandralekha', 'Baat Ban Jaye' and 'Bandook Meri Laila', in which Sidharth has made his singing debut through a rap sequence.

Click here to watch this eposode of Caraoke, with Sidharth Malhotra and Jacqueline Fernandez. 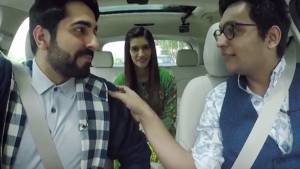