Better Riding: How to get off the brakes in a corner

Turn 1 at the Kari Speedway in Coimbatore is a fearsome place. On most Indian bikes, you arrive at top speed and have to get a lot of braking done before you can tip it into the first part of the turn. And today we are going to focus on a very critical time  in this process, the moment when you finish your braking and the moment when you make the steering input that makes the bike start to turn and lean.

You might wonder why this is so important. The importance of this moment is that on every machine, it is the way you approach these two moments that determines what will happen next. Whether you will get on your selected line or run wide. And that in turn has a cascading effect that will usually slow you down on the corner overall if you make a mistake. 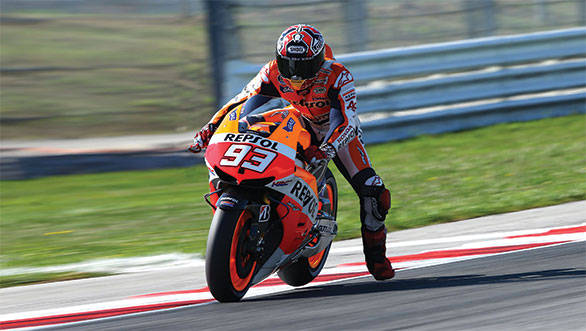 In those two moments, what is happening is that you're letting off the brakes. This eases the load on the front suspension and the front tyre, and transfers some weight backwards. The front suspension still isn't in its normal resting state though, which means the steering geometry is  still sharper than stock and the motorcycle is agile and responsive to steering inputs.

But if you're riding a street bike where acceptable ride quality requires the suspension to be soft enough to absorb our roads, then there is another moment between letting off the brakes and turning the bike, ­the moment needed for the suspension to settle. As in, when you let off the brakes, the rearwards weight transfer causes the front to rise back towards its normal position. But since the suspension is, in effect, a damped spring, it rises higher, then falls, then rises a bit less again. This cycle lasts maybe half a second on a well-tuned bike for the suspension finds its new equilibrium. Less obvious is the fact that the rear suspension is also going through the same motions.

In this moment, you simply cannot do anything. Your steering input is calibrated to a certain feel from the chassis and in this moment you won't find that feel until the suspension settles.

So the reason why focussing on letting off the brakes smoothly is important is that you want the suspension to settle as quickly as possible after you let off the brakes so you can begin turning in. Botch this and you will run past the point where you wanted to turn in and that error will magnify itself as you progress through the corner.

The trick, obviously, is to upset the suspension as little as possible as you release the brakes. And that in turn means just like you ease into the brakes, starting with a little pressure and quickly building up to however much brake force you need, letting off is the same process.

As in, you don't let the brake lever snap out to its normal state. Most of you, trust me, don't even know you do this until you focus on it. What you're supposed to do is ease off the brake lever progressively so that the suspension doesn't pogo as much before settling.

The Honda CBR250R is a good example of a bike that this technique produces great results on. The suspension is soft ? which is why it makes such an incredible highway tourer ? and that manifests in spirited riding as a lot of suspension movement after you let off the brakes. A movement that you end up having to wait for the motorcycle to work through before you can actually make a steering correction. Letting off the brakes more gently cuts this suspension movement and allows the bike to corner more effectively.

This is a technique that has great application at the racetrack, obviously. But even on the street, if you practice being smoother ­? this is one of the elements ? you will find that you get faster without effort.