It's official. After scrutiny at the 2016 edition of the 24 Hours of Le Mans, all the 60 cars and 180 drivers who had been entered in the 84th edition of the event, have been given the go ahead to compete in it. Which means that the fans from all over the world that descend upon the tiny French town of Sarthe, will be treated to a packed grid at the big race. And there's nothing quite like the sight of a packed start-finish straight at Sarthe, just before the race begins. It's an exciting time! 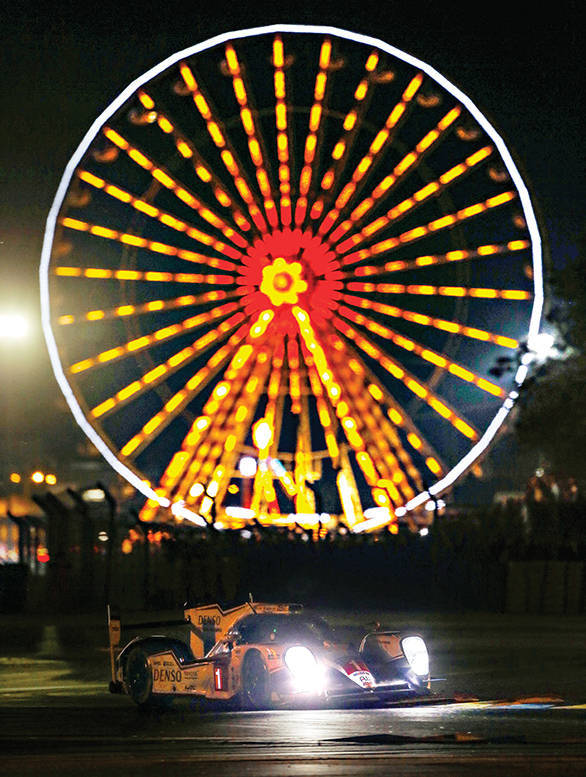 So exactly who do we need to watch out for at the 24 Hours of Le Mans this time around? Well, the best battles, or rather the most high-profile battles, can be seen in the LMP1 class. Which means in 2016, we're looking at the big three - Audi, Toyota and Porsche battling it out. Of course, with the privateer LMP1 teams - Rebellion Racing and ByKolles Racing also fielding cars in the race's highest class. That said, though, the LMP1 grid isn't as large as it was last year. Of course Nissan dropped out, after their ignominious performance in the race last year, and quit their LMP1 project entirely. And Audi and Porsche have dropped their own numbers from three cars to two cars each. But the competition, still ought to be very tight.

Porsche
Porsche go into the 2016 edition of the 24 Heures du Mans as defending champions. The victory that Earl Bamber, Nick Tandy and Nico Hulkenberg scored at the 2015 edition of the race in the Porsche 919 Hybrid was a combination of sheer hard work, brilliant strategy and some terrific driving. In fact, it's even beginning to look like the victory at Le Mans might well be the high point in Hulkenberg's career. And while the Sahara Force India driver won't be making a return to Le Mans this year, there's a strong pack of drivers that Porsche still has. 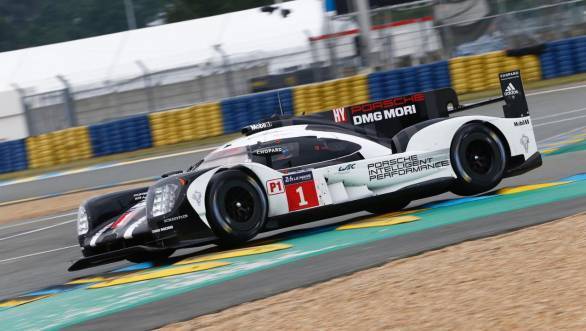 Leading Porsche's charge at Le Mans, in the No.1 919 Hybrid are Timo Bernhard, Brendon Hartley and Mark Webber. Bernhard is an old hand when it comes to Le Mans, and is very likely to be the driver that knows the inner workings of the Porsche team, and the 919 Hybrid better than anyone else. After all, he was a part of the development of the car from the very beginning. In Hartley, they have a very quick driver. And in Webber, they have stability. Which means that they're definitely in the race for the win. 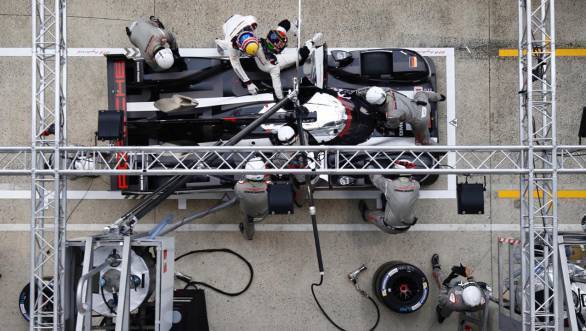 The No.2 919 Hybrid will be piloted by Neel Jani, Marc Lieb and Romain Dumas. Once again, Jani is the driver they count on for those fast laps, while Dumas, with his wealth of experience at the 24 Hours of Le Mans, and Lieb's consistency will also make the trio a formidable foe.

As far as the car itself goes, Porsche has worked hard to make sure that any flaws that the 919 Hybrid did have, have since been ironed out as they gun for victory number 18 at Le Mans. The 919 Hybrid is lighter now, thanks to weight saving measures on the 2.0-litre V4 engine, and an improved Lithium Ion battery should result in the electric motor being even more efficient. A revamped suspension system should also make things better. But, the competition is still very, very close.

Audi
Leading the charge for the Audi Sport Team Joest are Le Mans heroes - Andre Lotterer, Benoit Treluyer and Marcel Fassler. The trio form what is easily the strongest combination on the grid as far as pure race pace and reliability are concerned, which means the No.7 R18 e-tron quattro is something of a threat. The drivers in the No.8 car are Lucas di Grassi, Oliver Jarvis and Loic Duval, also experience, also reliable, although not spectacular. 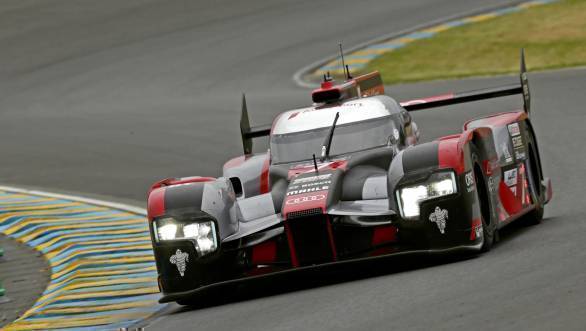 Audi goes into Le Mans with Andre Lotterer, Benoit Treluyer and Marcel Fassler the favourites to bring back the crown

There have been technical changes enough to make sure that the Audis will make a mark during the big race - and it's very likely that they will emerge in the lead during the first half of the 24 Hour motorsport extravaganza. The car is also lighter than it was last year, and Audi has dropped the flywheel for energy recovery, opting for Li-Ion batteries instead. They've also switched from the 4MJ energy category to the 6MJ energy category.  But whether they'll be able to win Le Mans, well, they have a rather gruelling 24 Hours to try and do it.

Toyota
Toyota will also field two cars at Le Mans. The No.5 TS 050 Hybrid will be piloted by Anthony Davidson, Kazuki Nakajima and Sebastien Buemi. While the No.6 car will have Mike Conway, Stephane Sarrazin and Kamui Kobayashi behind the wheel. It's the drivers in car No.5 then, who are the ones to watch out for in terms pure race pace, although with Kobayashi replacing Alex Wurz, there could be a hidden surprise (we're not sure whether it will be good or bad) in the No.6 car as well. 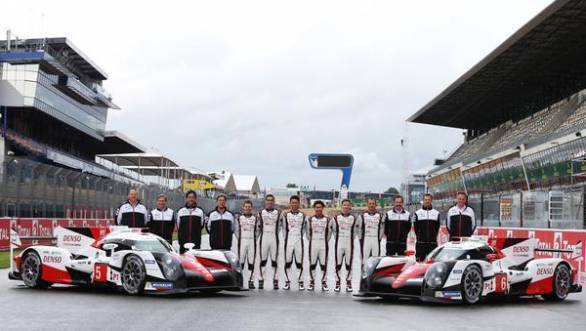 Toyota ended up almost forgotten at Le Mans last year. But 2016 could be their year to shine.

Did Toyota impress in the WEC last year? No, unfortunately they really didn't have what it took to take the fight to Porsche. But there's hope for them this year. Not one to take their defeat lightly, the team went back to the drawing board and really worked at making sure that the car for 2016 will be better. Out went the old 3.7 litre engine, and in came a 2.4 litre twin turbo motor instead. Out went the supercapacitor system of energy recovery, and in came Li-Ion batteries, as they move up to the 8MJ subclass. Unfortunately for us, Toyota crashed on the Le Mans test day, which means we need to wait until the qualifying sessions to see what they have up their sleeve for the race. It's going to be close!

LMP1 - The Rest
Rebellion Racing will field two cars at Le Mans this year. The No.12 Rebellion R-One-AER has Nick Heidfeld, Nicolas Prost and Nelson Piquet Jr. behind the wheel. The No. 13 car has Alexander Imperatori,  Dominik Kraihamer and  Mattheo Tuscher as pilots. And while we must acknowledge that Rebellion is pretty much the pinnacle as far as privateer teams are concerned, getting on the podium at the 24 Hours of Le Mans isn't going to be easy. Unless it turns into a race of attrition.

The other privateer team in the LMP1 class is ByKolles Racing, with Oliver Webb, Pierre Kaffer and Simon Trummer on driving duty in the CLM P1/01 AER. Do we expect a whole lot from this team? Unfortunately, not. The car lacks the pace to support its drivers. But you never know.

Ford is back, but...
Back in 1966, yes a full 50 years ago, Ford managed a win at Le Mans with the GT40. They also took second and third place at the same event, essentially locking out the podium. Quite a coup for them at the Circuit de la Sarthe! And in 2016, Ford is celebrating their grand success at the event in the absolute best way possible - they are making a return to Le Mans. 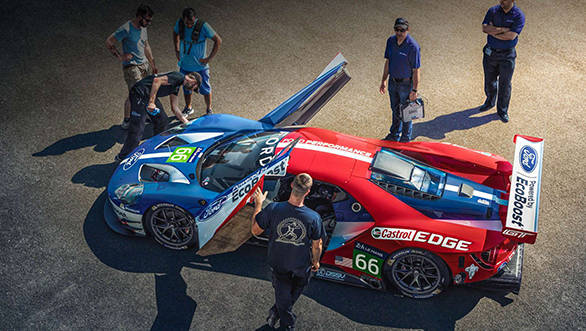 The four Ford GTs at Le Mans aren't really likely to get on the podium in the GTE Pro class, if the test day is anything to go by. We're saying this because the AF Corse Ferrari 488 GTE really does stand head and shoulders above the rest of the pack - and in Gianmaria Bruni, James Calado and Alessandro Pier Guidi, they have three excellent drivers to count on in the No.51 car. The No. 71 car has Davide Rigon, Sam Bird and Andrea Bertolini behind the wheel, also a decent combination of speed and skill. Then, there's also the Corvette Racing team that won at Le Mans last year  - piloted by Oliver Gavin, Tommy Milner and Jordan Taylor. The second Chevrolet Corvette C7.R could also do well, with Jan Magnussen, Antonio Garcia and Ricky Taylor as drivers. 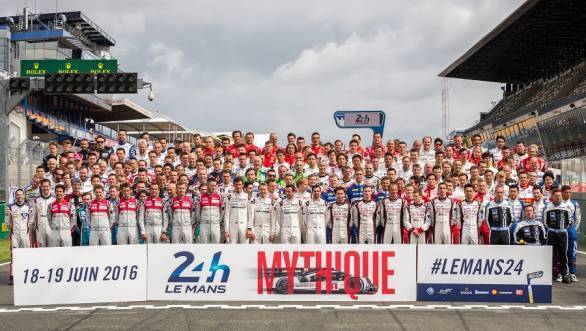 The brave men and women who will compete in the 24 Hours of Le Mans in 2016. Hats off to them. We know we couldn't do it.

Garage 56
Watch out for the modified Morgan LMP2 Nissan that has been invited to occupy Garage 56 at the 2016 edition of the 24 Hours of Le Mans. The car that has been developed in association with Onroak Automotive will be driven by Christophe Tinseau and Jean-Bernard Bouvet. The third driver is Frederic Sausset, a quadruple amputee, who will drive the car with a modified throttle and braking system that will be strapped directly to his thigh, while his right limb will be attached to the steering column to allow him to steer.