2018 Land Rover Above and Beyond Tour

Experiences are critical, aren't they? If you don't get a chance to experience something, how else would you understand it, or in this case, make a purchase decision? Land Rover, being known for their vehicle's off-road capabilities, decided to demonstrate how good their Discovery, Discovery Sport and Range Evoque are when driven off the beaten path. The Mumbai leg of the 2018 Land Rover Above and Beyond Tour is run at 19 Degree North, in Lonavala, where prospective customers and a few journos can experience what a bone stock Land Rover can do, on what is a narrow dirt trail with steep inclines and a river crossing thrown into the mix. After the safety briefing, I was handed the keys to the Range Rover Evoque. It may be the smallest SUV in the portfolio but it has the same suite of electronics as the Discovery Sport. 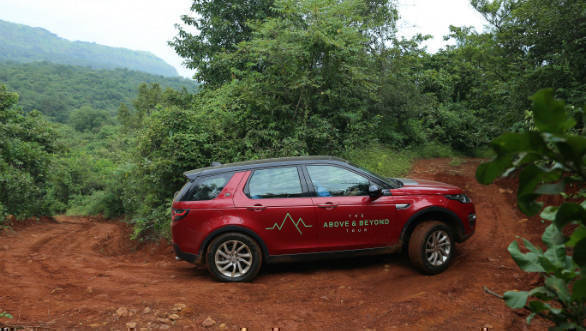 We set off, one after the other, down a steep dirt trail and that called for the activation of the Hill Descent Control (HDC). I set it to the lowest speed, took my feet off the brake pedal and let the electronics decide which wheel to brake, to maintain traction. The initial sections of the trail were mainly hard packed mud and loose soil so I slotted the Terrain Response System to Grass, Gravel and Snow Mode. This dulls the throttle response and prompts the gearbox to upshift quickly, ensuring maximum traction.

Next up was some water wading through a river. I was instructed to slot the Terrain Response System in the Mud and Ruts mode. This sharpens the throttle response and maintains the gear and revs for longer. I had to watch for some really large rocks while entering the water but credit to the Evoque's approach and departure angles, we didn't scrape against any. As soon as we got out, we drove over a rock that was angled to quite an extent. Thankfully, we got through without any slipping or sliding.

Finally, we began our ascent to the top and that was the trickiest part. Besides the gradient, there were a few tight hairpins to negotiate for which we called upon Land Rover's awesome All Terrain Progress Control (ATPC). It, essentially, is cruise control, that's calibrated for driving off-road. So, while I had to only steer the Evoque, the electronics tool care of throttle inputs, gear selection and braking as well. It made life really simple as I didn't have to worry, even if the wheels get stuck in a rut. The system would dial in just the right amount of throttle to keep the wheels from spinning, ensuring the car got out without breaking a sweat. By the end of the day, it was quite clear that the clever suite of electronics on a modern-day Land Rover has endowed them with very impressive off-road capabilities, no matter the skill level of the driver. And think there's no better way to experience a Land Rover, than driving it off-road