There's nothing quite like a race weekend witnessed from the side of the track, and observed from within the paddock, to give you a proper glimpse of the very real, unsettlingly human emotions of the men and women in MotoGP. We're trackside at MotoGP Catalunya, and, just like we did yesterday, here are our glimpses of the CatalanGP as viewed from the inside on race day. 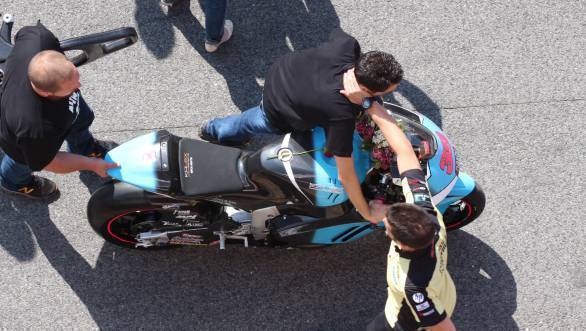 The death of Luis Salom hung over the weekend so thickly that you could feel it deep inside your bones. The smiles were strained, music was subdued and the paddock had a darker quality to it. I was at Sepang when Marco Simoncelli died and it. Is the worst feeling of them all. Here Salom's bike is rolled back into the pits after the entire MotoGP staff gave a quiet, teary-eyed goodbye to their fallen colleague. Markings to make the motorcycle swap stop more efficient, as seen outside the Repsol Honda box

This whole swapping the motorcycle thing is becoming as ridiculous as pit stops in F1 as a part of strategy to win a race. We were in the Michelin hospitality right over the Repsol Honda garage and fluro stickers marked the entry and swap paths for Dani and Marc. Really? The ability to leap from one motorcycle to another is part of winning? Who thought the rule that leads to this place was a good idea, then? 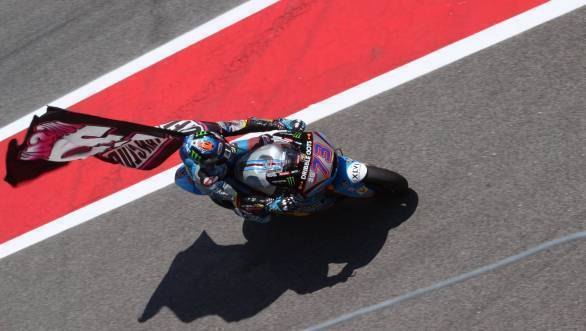 Some of the fondest applause was reserved for Luis Salom's flag carried as an homage by Alex Marquez. It's been a difficult weekend for motorcycling in general. A rider and a sidecar racer died earlier during the Isle of Man TT 2016 and then Salom. As Dani Pedrosa pointed out in the press conference after the race, the fans should recognise the risk the riders take to put on a show for them and themselves [the riders, as racers and motorcyclists]. They should recognise that risk and give respect to all the riders. 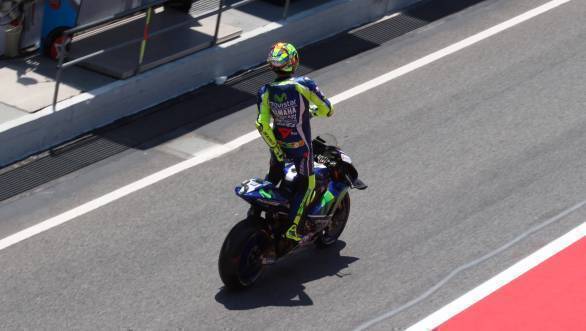 Those signature Rossi moves that are impossible to miss. Here he is in the tricky act of, er... adjusting his riding leathers

Watching Valentino Rossi head out for the MotoGP Race Grid is very cool. He's an animated rider with a set pattern of behaviour, including be pulling the leathers out of his bottom move seen here. It felt very good to watch the rider in the flesh rather than through a television screen. This is before we knew who the race would go and honestly, watching Vale win is special. 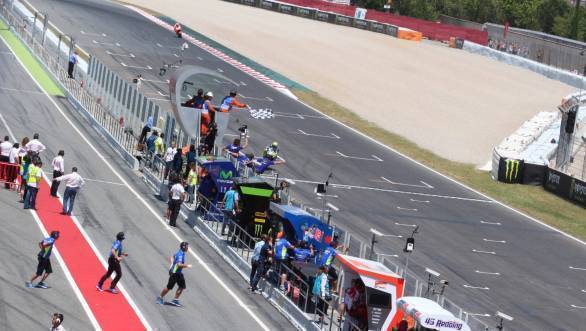 Watching Rossi cross that finish line first. It's impossible not to whoop and cheer!

We are supposed to be only reporting, but I am a Valentino Rossi fan. A group of us journalists cheered loudly from our vantage point over the start finish straight for number 46 loudly and shamelessly. A senior member of Michelin hanging with us said, "It's nice to see how objective you are about Valentino!" with a great big huge smile on his face. We smiled and carried on cheering even harder. As I've said before, we old people must stick together and support each other.

After the race Rossi shook hands with Marc Marquez. His answer as to why he did so put the grim reality of motor racing, and especially grand prix motorcycle racing, into perspective. "It has been a difficult weekend for all the riders and MotoGP. Last night I think that this [tiff between riders] is too small, too unimportant in the bigger picture..." he said.

The good Doctor is king... Even in Spain 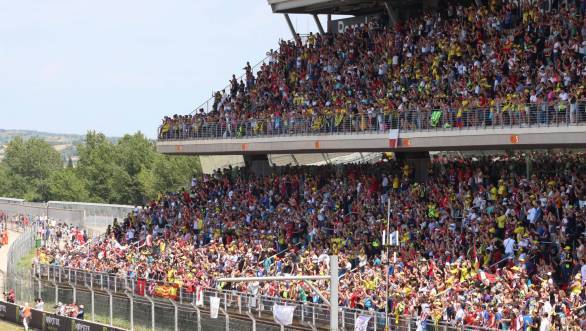 Fans in the main grandstands move to the side that gives them the best view of the Yamaha garage when the last lap begins!

The crowd in the main stand streams to the left edge steadily as the last lap begins. That's where the Yamaha pit is and where the podium is as well. I was sitting in the press conference room waiting for the victors to walk in but the clear chant of "VALE! VALE! VALE!" was unmistakable. And it shouldn't come as a surprise. The VR46 merchandise shops behind the main grandstand had queues three deep in all the outlets, while the MM93 and JL99 outlets weren't quite so busy - and this is in Spain. And kudos to the people trying to sell an AGV Corsa helmet with Vale's autograph on it for 2300! 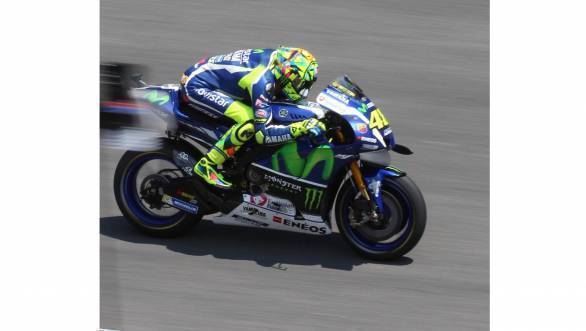 The old hen still makes good broth, although it sounds better when Valentino says it in Italian

Are you in the best form of your career? It's a typically Rossi response: "I do the same thing all my career - try to be as fast as possible at 2 o'clock on Sunday..." 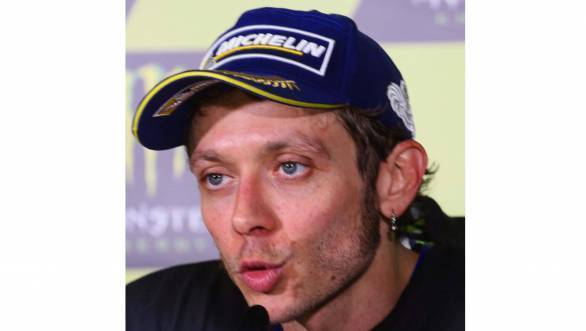 Rossi is older and wiser, but as canny as ever!

The handshake with Marc Marquez was one thing. But was Rossi ready to bury the hatchet with Ducati-bound team-mate Jorge Lorenzo? "When I came back to Yamaha I always make the effort. To say 'ciao' and say 'how is going', you know? This year I decide to wait for Lorenzo to come say 'ciao'.

Still sharp, and how! 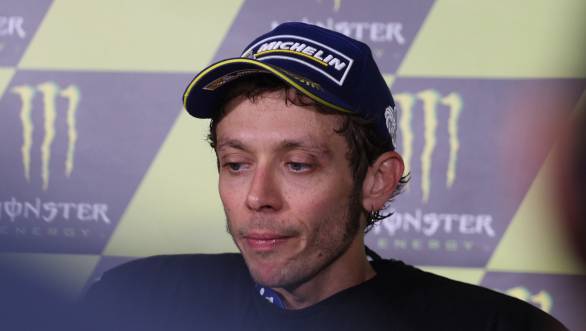 Look at Rossi today, and the age shows. But what's that they say about fine wine?...

Valentino Rossi looks older now. The lines in his face are etched in harder and the resolve in his jawline is clearer than it has ever been. He continues to defy the odds and remains a most intriguing motorcycle racer steeped in the sport's lore, legend and history. But when you're seated 10 feet away, it's his eyes that grab your attention. There's a restless intelligence and clarity in them that's amazing to see. This man might be the oldest rider in the MotoGP but make no mistake, he's very much the sharpest knife in the drawer.