It's a widely known fact that tyres are among the most important yet most underrated aspect of how well a car drives. However, I recently discovered something new about tyres that got me thinking  if you haven't experienced a tyre, you can never be a fan. After all, it's easy to look at pictures of the latest sportscar or fast bike and fall in love, but almost no one ever says, "Wow, that new range of soft compound tyres from MiYokoStone looks awesome!" 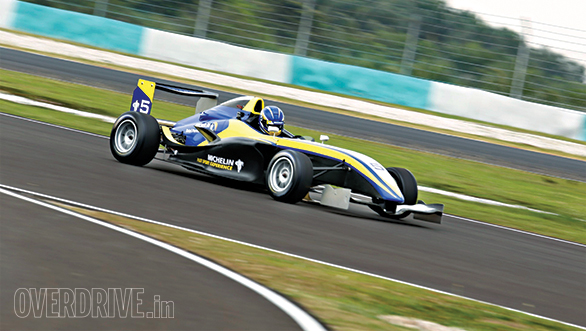 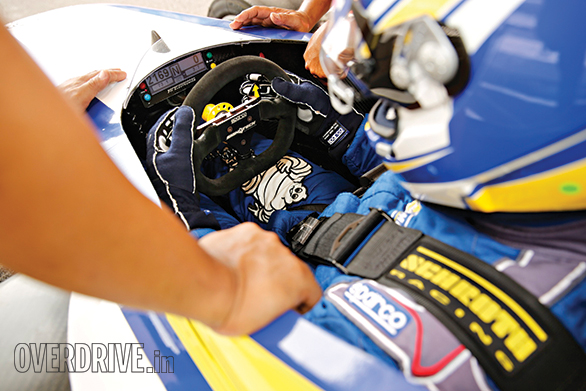 Realising this over a decade back, Michelin began the Pilot Sport Experience with the aim of getting dealers and a lucky few customers and journalists to experience what tyres at the highest level are capable of. Michelin is the world's oldest tyre manufacturer and it has the biggest presence in motorsport worldwide. Through the Pilot Sport Experience, we'd spend a day with three very different types of racing machines, all shod with Michelin competition-spec rubber. After a detailed orientation session and a simple blood pressure examination, we were suited up in full racing overalls and sent out to drive!

The day began in what was the least powerful, but in hindsight, probably the most fun car. This was a Citroen DS3 R1 rally car. The R1 is an entry-level rally car that offers sophisticated suspension mated to a 1.6-litre engine that puts out a humble 130PS at the front wheels through a simple manual transmission. The rally course was in one of the side sections at the Sepang Circuit. It was a short, muddy loop with a variety of turns, including a fast left-right section that allowed laugh-out-loud sideways action if you got the entry right. It had rained the night before which left the mud surface almost completely slick in certain sections. Fun! The rally-spec rubber actually had a lot more traction than I was expecting and it took a while to understand just how much speed could be carried through the course. After an uncertain first session, it was apparent that careful throttle control and precise corner entry dictated whether you'd enjoy big slides or suffer crippling understeer. I've never driven a rally car before but I'm already in love with this beautiful dance form of driving! 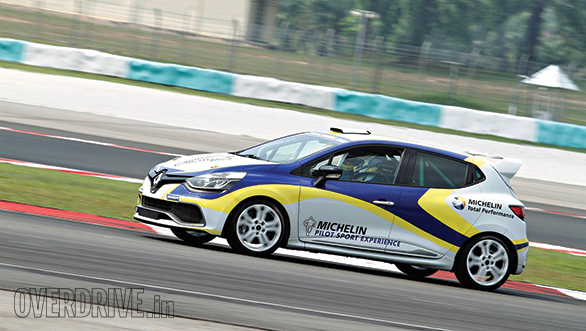 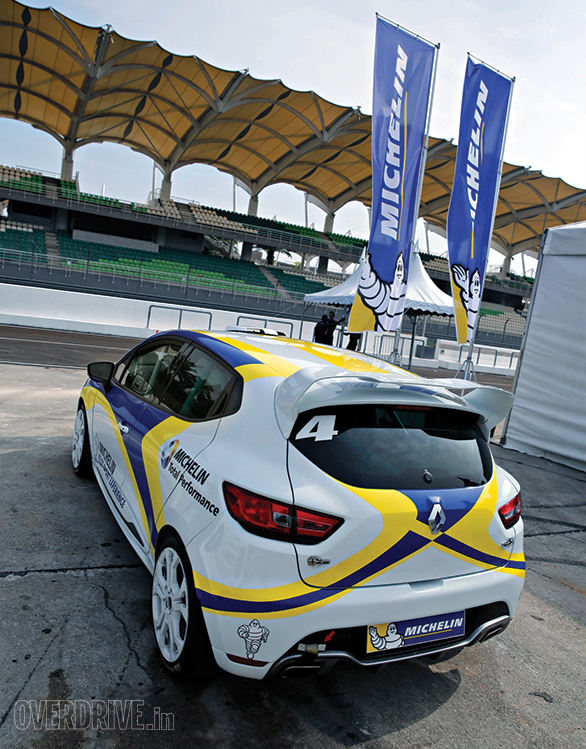 From the rally car we progressed to track-focussed car which offered a completely different experience. The Renault Clio Cup IV is a touring car that feels like a much more serious race car than the cheeky DS3. The interior looked much more focussed with an array of buttons on the steering wheel as well as paddle shift gears. However, this isn't your typical dual-clutch automatic like the Vento Cup race cars use in India. Instead, the Clio Cup packs a sequential gearbox that requires a clutch for setting off and stopping but otherwise allows clutchless up and downshifts on track. Pulling away with these sequential gearboxes can be tricky. You need a lot of revs, around 3,500rpm, and have to slowly bleed off the clutch while progressively feeding in the throttle. Get it right and the car grumpily sets off once at speed though the gearbox offers lightening quick shifts accompanied by a firm thud. It works best when used at high revs.

Contrary to the DS3, the 220PS front-wheel drive Clio Cup touring car with its slick tyres is all about grip and precision. Corner speeds are seriously high, and you can feel the limited slip differential working hard to send power to the front wheel with more grip. This car comes with racing style unassisted brakes that require big effort at the pedal but offer amazing feel and stopping power. There's no electronic assists like ABS or ESP, but in our short time with the car I never came close to the limits of requiring either. 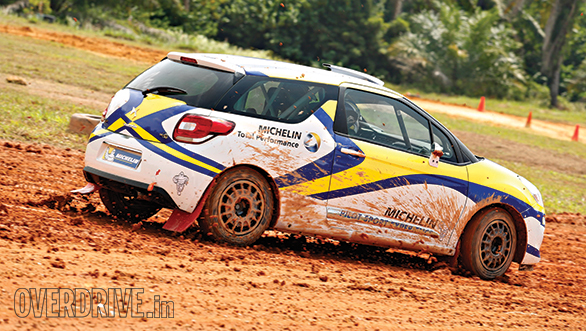 The final experience was the one we were all waiting for the most, the F4 race car! 160PS might sound trivial, but this carbon-fibre machine weighs just 470kg which means serious pace! If the touring car felt serious, the F4 was a raw racing machine. It has no seat and you lower yourself right into the hard chassis tub. Shorter drivers have the luxury of using some foam pads, but that wasn't an option for me since I could just about squeeze in. The F4 uses a sequential gearbox as well but it offers even harder shifts than the Clio, each shift landing home with a mighty thud. This car offered my first taste of aerodynamic grip, and as a result braking distances were much shorter. It was also clear that you could carry significantly higher corner speeds than in a conventional car. Ultimately, the pace was limited by the Audi A6 lead car we were to follow - it had no hope of carrying the crazy corner speeds the F4 car is capable of. After just two sessions of about four laps each, the vibrations from the hard seat back started to blur my vision and mess with my breathing. I'd happily use the excuse of being too tall, but the truth is that at my fitness level, I'm better off in relatively comfy touring car with a proper seat despite the fact that the F4 car is incredible to drive.

These three machines were poles apart, but they all proved one thing  they are useless without rubber that can support the performance. It was an incredible day but I've saved the best for last. You'll have to check this story for more!

The Science behind the rubber 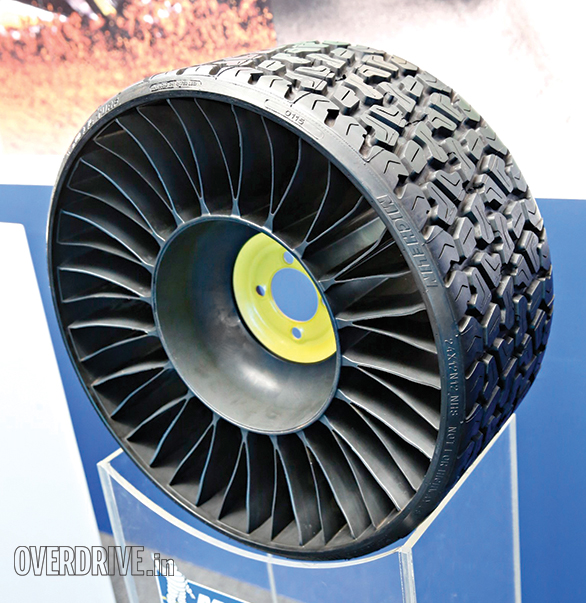 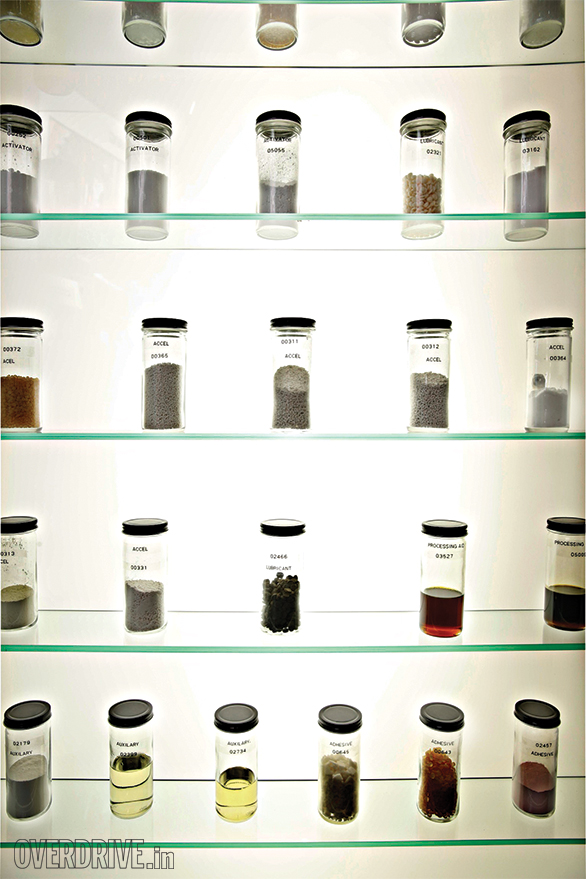 It's easy to imagine the tyre as a simple hoop of rubber on a steel carcass, but it is much, much more than that. Michelin gave us a brief technical explanation of what goes into making a modern tyre, and some of the facts are truly surprising. For example, natural rubber forms a very small part of most road-going tyres and carbon black has almost entirely been replaced by silica. The more chemicals added to the mix, the more side effects creep up, and these can only be countered with even more chemicals. On average, there are nearly 200 different chemical compounds and ingredients that go into making a tyre these days, and they are focused towards better wet and dry performance as well as longer life.

From pioneering the road tyre over a 100 years back, Michelin is at the forefront of tyre technology. Tireless, ahem, research has resulted in multiple future-ready concepts like the Tweel airless tyre showing that this company is ready to take on the next 100 years. 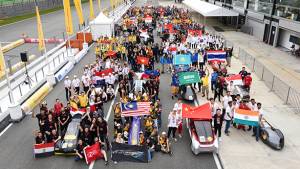