It's been five years since Volkswagen started off a one make series with the Polo and since then the company has gone on to be the most involved manufacturer in Indian motorsport. The first cars were diesel with a manual gearbox. The engine borrowed from the Vento displaced 1.6 litres and was tuned to produce about 130PS up from the Vento's 105PS. Then in 2012 came big changes. The Polos switched over to a much higher level. The cars now featured Volkswagen's twin-charged 1.4-litre petrol engine that used both a turbo and supercharger to produce 180PS. Another big change was the transition to an automatic gearbox - a 6-speed DSG. Now, however, Volkswagen has moved on to the Vento Cup and while the engine and gearbox are identical, the company claims it is quite a different animal. After an enjoyable morning of throwing the car around the Kari Motor Speedway and driving it back to back with the Polo support racecar (1.6-litre petrol and 5-speed manual) we found ourselves agreeing. 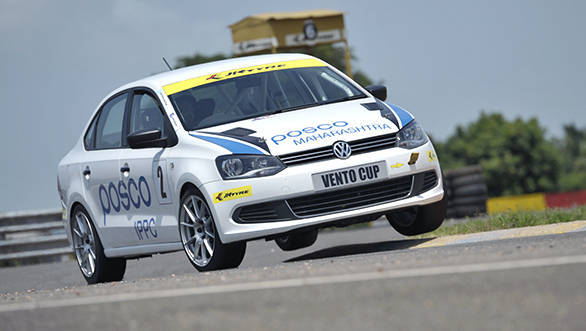 I haven't driven the Polo Cup car before but it has a reputation of being rather tail happy. And that's something I confirmed on my first fast lap in the support racecar. I went into the first corner hot on the brakes and the next thing I know the rear has gone massively sideways and I'm grappling with the wheel to keep it on the track. The Polo was entertaining but a tricky car to drive on the limit. With the Vento, Volkswagen immediately had the benefit of a longer wheelbase which naturally means more stability. And this was evident when I jumped into the Vento after the Polo. I could attack the same corner harder on the brakes and the rear would stay in line and when it did eventually break out, it was done so much more progressively. For a racecar that is designed to teach rookies, this is an invaluable confidence booster. The Vento racer weighs about 50kg more than the Polo but it's actually faster because its boot cuts a more aerodynamic profile than the hatch. So while the switch to the Vento may have been largely a marketing exercise, the race team has actually managed to produce a superior car. And that's a rare win-win between race engineers and the marketing team! 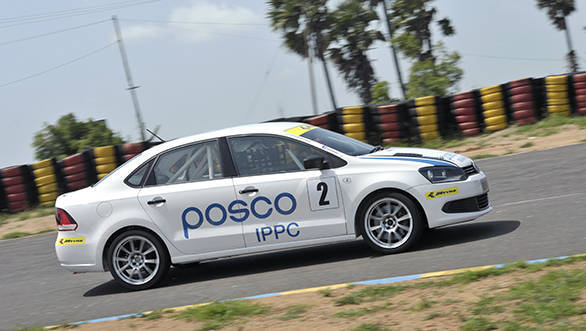 Let's talk about the car. At first glance it doesn't look particularly exciting. There's no form of racy body kits or spoilers and aside from the large 17-inch wheels and livery you could very well be looking at a stock Vento. Read between the wheels though and you'll see massive disc brakes that barely fit in - a sign of this car's intentions. A straight lift from the high performance Golf R32 hatchback, these brakes are strong and resist fade although I found that the pedal does feel soft, just like in a road car. ABS is standard and according to Sirish Vissa, head of Volkswagen Motorsport India, the disc pads can last an entire season. In fact the entire car needs very little maintenance through the season with just a single service and oil change required. 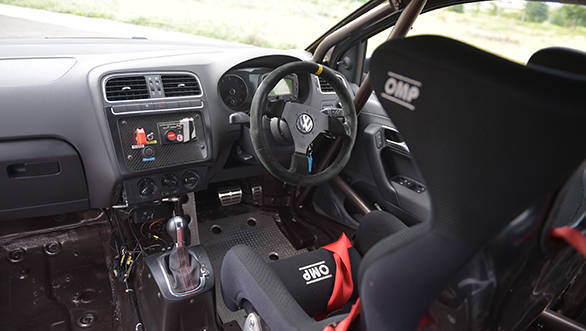 Inside you're greeted by a spartan cabin that instantly screams 'racecar'. There's a single bucket seat and the dash has simple toggle switches for the main power supply and data logger. A separate red button activates the fire extinguishing system that is plumbed around the entire car. There's also a button for the driver drinking system that is supposed to supply water to the driver through a pipe snaked into the helmet. However since Volkswagen found that the drivers weren't really using the system over India's short duration races they've deactivated it. Also deactivated is the aircon - in fact the entire compressor has been removed to save weight. However the blower still provides a draft that is welcome on those really hot days in Chennai and Coimbatore when you're sweating in your race suit at the start line and desperately waiting for the race to flag off and the adrenaline rush makes you forget all about the heat. 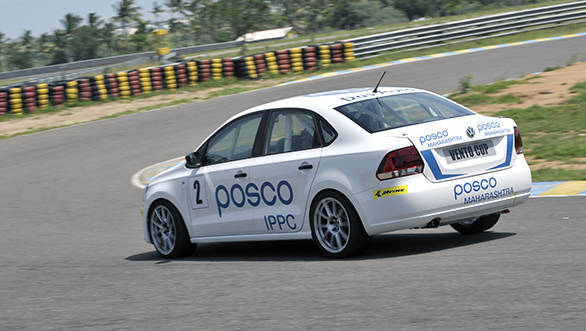 For this year, the Vento has a roll cage welded to the chassis as against the bolt-on unit in the Polo. The steering wheel is small and has paddle shifters while the gear selector is just like the one you'd find in an automatic Volkswagen roadcar.
The team has tinkered with the exhaust and the car sounds louder and more guttural, especially on start up. The steering feels different from a standard Vento because the bushes have seen changes and lock has also been reduced to accommodate those big 17-inch slick tyres. At pit lane speeds, the exhaust note is pierced by a swirling noise typical of a forced induction engine. It's not exactly sonorous but the sound is exciting nonetheless. You can't hear too much of it from the car, but bystanders are treated to a loud pop from the exhausts on full bore upshifts. In terms of pure spectator value, this car makes all the right noises. 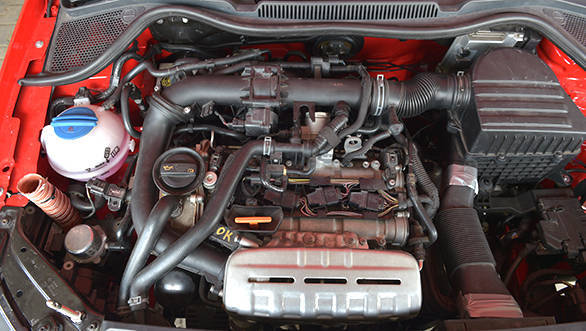 But what really counts is the sensation behind the wheel. From the moment the Vento hits the track, it feels more taut but also more composed than the Polo. The DSG gearbox had me a little apprehensive at first but the gearbox is a fast and responsive unit. Upshifts are lightening quick and downshifts, while not quite as immediate, are still served up almost as soon as you want them. You could stick the box in Sport mode but I found that it tends to downshift a gear too many on corner entry and the fastest way was to select Manual mode and use the steering mounted paddles, just like driving coach Rayomand Banajee suggested. The steering itself feels more alive, and reactive to camber changes and bumps in the tarmac pulling slightly this way and that, probably because of the limited slip differential at the front wheels working hard to find grip in every situation. It makes the experience all the more visceral. Engine performance is plentiful and characterised by a big midrange wallop with a strong pull till about 6,000rpm at which it's time for the next gear. While it's undoubtedly a fast car, I never found the Vento overwhelmingly so but just at the sweet spot of what I'd expect from a grassroots racing car. It's been a while since I've been back in a racecar and I loved every minute behind the Vento's wheel. 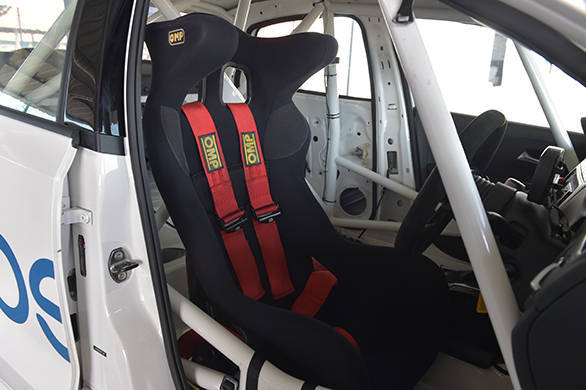 You can sense that the car has been set-up to be fast and accurate but also forgiving. The suspension isn't rock hard and there's some compliance to it. This makes it easier to commit to the bumpier corners, especially the first chicane at Kari that has to be taken flat out for a fast time.  In fact, this car's only weak point has nothing to do with the car itself but actually lies in the JK racing slicks. After a few laps I got the impression that they don't match the capability of the chassis and set into understeer as you start pushing the envelope. At first I didn't like this, especially since I've experienced the super sticky slick tyres on the Etios racecar. But then I realised that because you can't throw the car into corners at incredible speeds you have to focus on refining your driving. Braking needs to improve, steering needs to get smoother and throttle input has got to be precise. Driving this car at race pace demands effort and skill from the driver, more so because of the tyre characteristic. As Sirish put it with a clever smile, "it's a one make series so it doesn't really matter because everyone is on the same tyre." 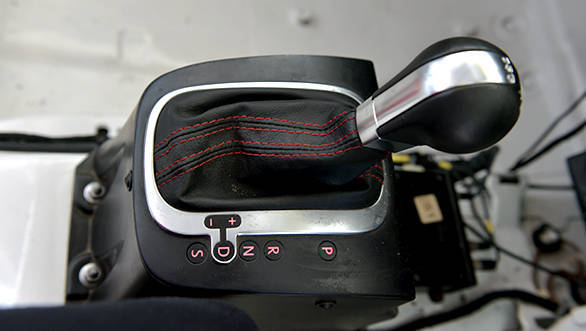 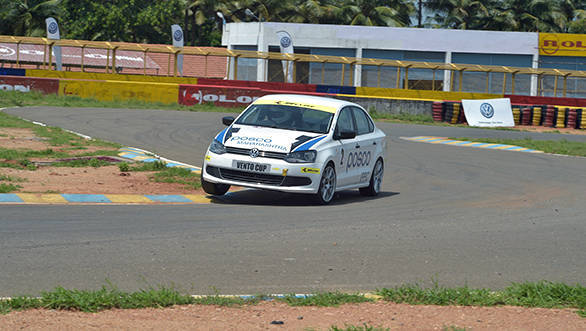 How does it compare to your standard Vento 1.2 TSI? Well the fundamentals are there - small capacity forced induction engine and DSG gearbox but the racecar is a much more focussed animal. It amplifies every sensation of the roadcar multifold, be it the speed, response, agility or just plain simple excitement and the ability to put a big grin on your face.

After all, that's the very aim of an entry level racing series isn't it? To make better drivers. And the Vento Cup car is exactly that - an excellent and exciting learning tool in an evenly matched competitive environment. It's far from cheap though and a seat (this year is already finalised) will cost about Rs 8 lakh (Rs 12 lakh if you're above 26, ouch!) which gives you all your racing gear, a fully set-up car as well as driver training. Volkswagen will also help with subsidised rates for your racing gear like helmets, gloves and boots as well as travel and accommodation. If you want to compete in a professional and comprehensive one make series (Toyota's Etios Motor Racing series is much, much cheaper but has just one round scheduled for this year) the Vento Cup is a fine choice, and your only real one if we're being honest.