F1 2018: Victory for Verstappen and championship lead for Vettel at Austrian Grand Prix

The Austrian Grand Prix had a few unexpected twists and turns, with both Mercedes AMG F1 machines retiring from the race, while Red Bull Racing's Max Verstappen managed to take a fine victory at the event. Second place in the race went to Ferrari's Kimi Raikkonen, while third place went to Sebastian Vettel. This also meant that Sebastian Vettel managed to move back into the lead of the championship, albeit with a slim one-point advantage over Lewis Hamilton. 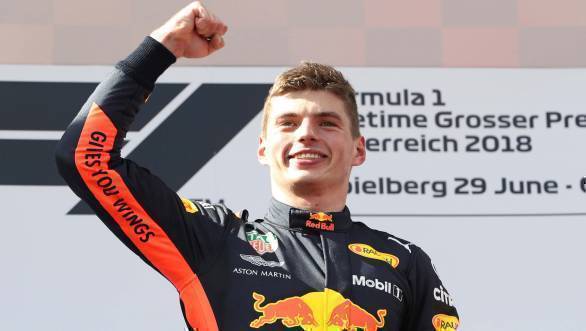 It was Valtteri Bottas who was on pole at the Austrian GP, but the Finnish driver lost the lead to his Mercedes team-mate at the very beginning of the race. Verstappen, who started fourth on the grid, managed to move up to third on the opening lap, and then moved into second when Bottas retired on the 14th lap of the race.

There was a strategy error on the part of the Mercedes team, who opted not to pit Hamilton during the Virtual Safety Car period that was necessitated by the fact that Bottas' car was beached at a slightly less and ideal spot. This meant that eventually, with tyre wear on his left-rear tyre, Hamilton had to stop for fresh rubber, putting him on a two-stop strategy, which saw him move down to fifth-place overall. It was a similar situation for Red Bull Racing's Daniel Ricciardo, who also had to stop a second time. But Verstappen was able to stay out ahead of the rest of the field, managing his tyres well, eventually claiming victory. 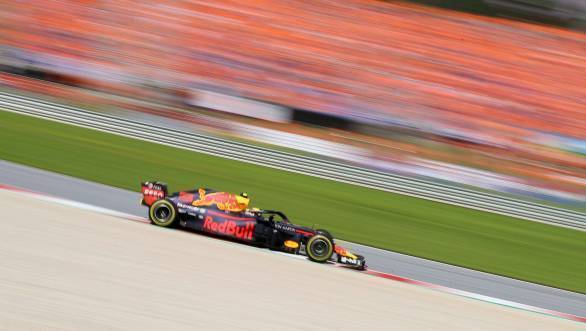 Naturally, Hamilton was none too pleased with the fact that Mercedes had scuppered his race strategy, but there was little to be done about it. His hopes of fighting for a podium were ruined when his car began losing power, resulting in him retiring on the 63rd lap of the race. Ricciardo also ended the race prematurely, with a gearbox issue forcing him into retirement.

Ahead, Verstappen, who has received criticism aplenty for the errors that he's made over the course of the 2018 season, took his first win of the year. This takes his total tally of Formula 1 wins to four. It also allowed him crucial points in the driver's championship, which moved him to fifth in the standings, ahead of Bottas. 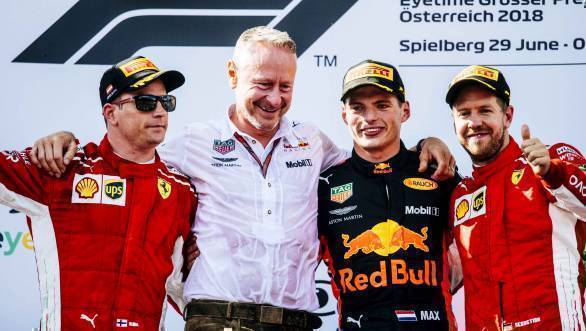 Kimi Raikkonen took second place, with Vettel finishing third, ensuring that both the Ferraris got on the podium. This means that Vettel now occupies the top spot in the championship standings, one point clear of Lewis Hamilton, with 146 points to Hammy's 145. Meanwhile, Ferrari moved to the head of the Constructor's Championship with 247 points to Mercedes' 237.

Fourth place in the race went to Romain Grosjean, who managed to score his first points since the 2017 Japanese Grand Prix, much to the relief of his Haas F1 team. Kevin Magnussen ensured there was more reason for the Haas team to smile, finishing in fifth place. This was the best result for the team since their 2016 debut, and it also earned them enough points to move them up to fifth in the championship ahead of McLaren.

Sixth place went to Force India's Esteban Ocon, while his team-mate Sergio Perez finished seventh. Fernando Alonso took McLaren to eighth place, which was an unexpected result given that he started from the pits. His was the lone McLaren at the end of the race, with team-mate Stoffel Vandoorne registering a DNF. It was double points finish for Sauber - with Charles Leclerc finishing ninth and Marcus Ericsson taking tenth place.

Pierre Gasly ended the race 11th for Toro Rosso, while it was another disappointing outing for Brendon Hartley who retired with 16 laps left in the race. Renault's Carlos Sainz Jr ended the race 12th (his team-mate Nico Hulkenberg had already retired) while Williams drivers Lance Stroll and Sergey Sirotkin were the last classified finishers in 13th and 14th place.