Valtteri Bottas transformed his pole position into victory at Formula 1's season finale race at the Yas Marina Circuit in Abu Dhabi. It was his third race win of the 2017 season. The Finnish driver also set the fastest lap of the race, giving him his first hat-trick of his F1 career - pole, race win, and fastest lap. His victory also gave him 25 valuable points that helped him seal third place in the driver's championship standings, behind Ferrari's Sebastian Vettel in second. Bottas' Mercedes team-mate Lewis Hamilton, has, of course, already sealed his fourth F1 world championship title. 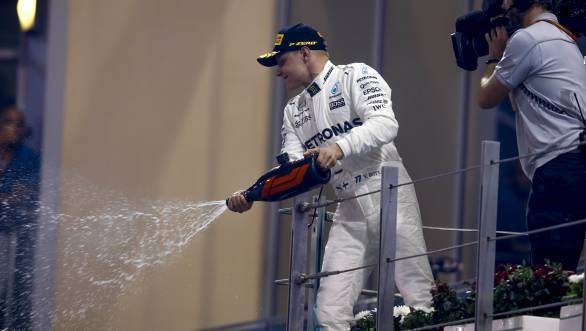 There were other reasons for the Mercedes team to celebrate at Abu Dhabi, chief amongst them being the fact that Hamilton managed to score points at every single race in the 2017 season, which means he joins the likes of Juan Manuel Fangio and Michael Schumacher who have managed to achieve the same feat too. Hamilton has also now scored points in 25 consecutive F1 races, putting him only two behind Kimi Raikkonen's magnificent streak of consecutive points-scoring finishes between the 2012 Bahrain GP and the 2013 Hungarian GP. 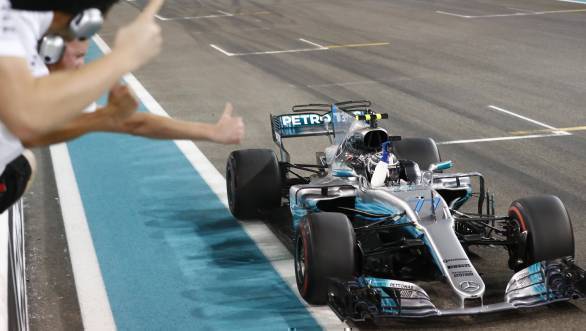 Second-place at the Abu Dhabi GP went to Lewis Hamilton, who despite his best efforts to close the gap to Bottas, was unable to do so. Third place went to Ferrari's Sebastian Vettel, who had a quiet race in his run to the final step on the podium. Vettel's team-mate Kimi Raikkonen claimed fourth place. Max Verstappen claimed fifth place for Red Bull Racing. Renault's Nico Hulkenberg finished in P6, while Force India pair Sergio Perez and Esteban Ocon finished seventh and eighth. Fernando Alonso claimed points for McLaren in ninth place, while Felipe Massa ended his grand prix career in 10th place.