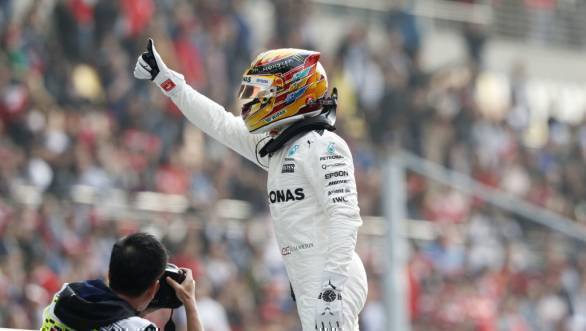 Lewis Hamilton celebrates his pole position at the 2017 Chinese GP

The second F1 race of the 2017 season, and another close battle for pole between Lewis Hamilton and Sebastian Vettel. This time at the Shanghai circuit for the Chinese Grand Prix.

Ultimately it would be Lewis Hamilton who would claim pole position, his sixth at Shanghai, making it two in a row for the Mercedes AMG F1 driver in 2017. Starting second on the grid is Ferrari driver Sebastian Vettel, while Hamilton's team-mate Valtteri Bottas will start tomorrow's race third on the grid. Hamilton's lap time of 1min 31.678sec was better than Vettel's by a slim 0.186sec. Bottas, meanwhile, was just 1000th of a second off Vettel's time.

Fourth on the grid was the second Ferrari of Kimi Raikkonen, with the Finn complaining of understeer over the course of Q3. Red Bull's Daniel Ricciardo took fifth place, while sixth position on the grid went to Felipe Massa in the Williams.