Mercedes AMG F1's Lewis Hamilton will begin the 2017 Spanish Grand Prix from pole position. The British driver set a time of 1min 19.149sec in Q3, which meant that he edged out Ferrari rival Sebastian Vettel by 0.05sec. The fact that Vettel made a mistake, running wide at the very last corner, meant that he lost time and wasn't able to beat Hammy. 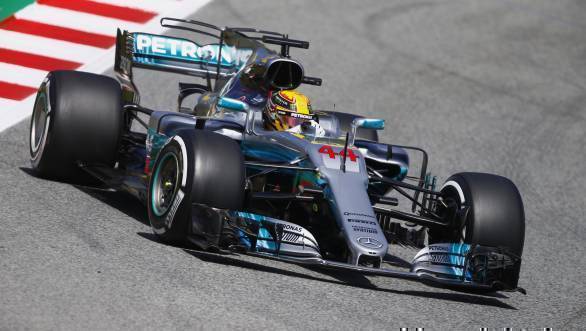 Third fastest at the end of qualifying was Mercedes driver Valtteri Bottas. The Finn will be joined on the second row of the grid by fellow countryman Kimi Raikkonen, who took his Ferrari to fourth place.

The third row of the grid sees the Red Bulls of Max Verstappen and Daniel Ricciardo line up side by side, with the Dutchman narrowly beating out his Australian team-mate. However, the hero of the Spanish GP Qualifying sessions proved to be Fernando Alonso. The double world champion managed to drag his much-talked-about, and somewhat ailing McLaren-Honda to seventh spot on the grid, which was something of a achievement for the team.

Sergio Perez took his Force India to eighth place on the grid, with Felipe Massa ninth for Williams. Esteban Ocon, in the second of the Force Indias, rounded out the Top 10.