Lewis Hamilton will start the United States Grand Prix from pole position. Hamilton set the fastest lap during qualifying, with a time of 1min 33.108sec, which was enough to assure him his 11th pole of the season. It was a perfect weekend for the British driver, who is now chasing his fourth world championship title, as he finished fastest in all three free practice sessions. 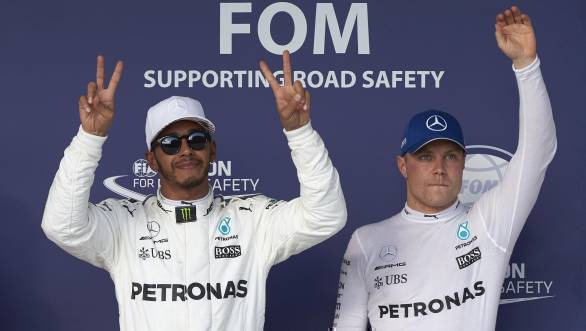 Hamilton, however, is realistic about his chances of claiming the championship title at the Circuit of the Americas, saying that with Vettel managing a second place in qualifying, it looks unlikely. Valtteri Bottas, Hamilton's Mercedes team-mate, takes third spot on the grid, behind the Ferrari of Vettel.

Daniel Ricciardo ended fourth for Red Bull, while his team-mate Max Verstappen could only set the sixth-fastest time. Kimi Raikkonen put the second of the Ferraris fifth on the grid, splitting the Red Bulls. However, Verstappen will end up dropping down the order due to a grid penalty, with Esteban Ocon moving up to the third row of the grid in his Force India.

Carlos Sainz Jr. got off to a good start at Renault, having qualified eighth, ahead of McLaren's Fernando Alonso who finished ninth, while Sergio Perez completed the top 10 qualifiers.

Brendon Hartley qualified 18th in his first ever F1 race, seven-tenths of a second off the pace of Toro Rosso team-mate Daniil Kvyat. However the New Zealander will start the race last on the grid thanks to a penalty.