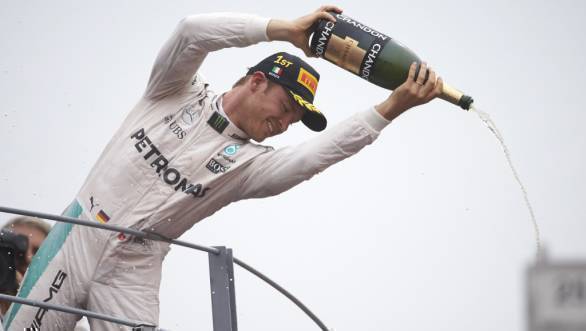 The 2016 Italian Grand Prix at Monza saw a terrific drive from Mercedes AMG F1's Nico Rosberg. A drive that saw him through to the top step of the podium, and also saw him close the gap to championship leader Lewis Hamilton. The difference in points between the team-mates, as F1 heads to Singapore, is now down to just two.

The race was Hamilton's to throw away. Starting from pole, Lewis messed up his race when the five red lights went out, allowing Rosberg to move into the lead at the first corner. The defending world champion slipped down into sixth place, while the two Ferraris managed to move up the order, with Williams driver Valtteri Bottas and Red Bull Racing's Daniel Ricciardo ahead of him. 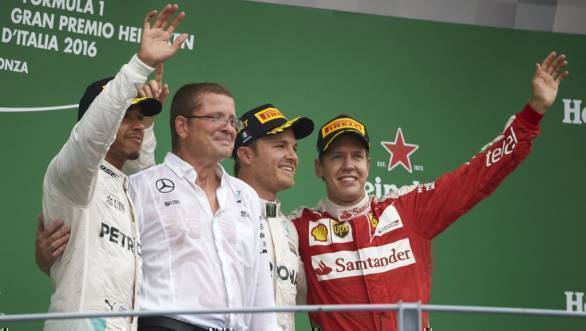 Hamilton, Rosberg and Vettel on the podium at the 2016 Italian GP at Monza

Hamilton did, however, begin making his way up the order soon, but it was a strategic call by Mercedes that helped him get the move on the Ferraris ahead of him. Hamilton, on a one-stop strategy, managed to get ahead of Sebastian Vettel and Kimi Raikkonen.

Rosberg, meanwhile, was able to keep his lead at the head of the pack, and was never really threatened by his team-mate. This meant he took his first ever win at the Italian GP. Vettel made it to third on the podium, behind the Mercedes pair, which meant that there was something for the scarlet fever-ed Tifosi, the Ferrari fans, to cheer for after all.