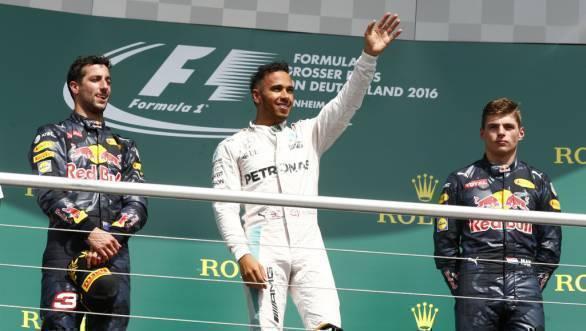 Victorious Lewis Hamilton on the podium at the 2016 German GP, flanked by Daniel Ricciardo and Max Verstappen

Making good on his attempt at defending his Formula 1 world championship title, Lewis Hamilton took another victory, this time at the 2016 German GP at Hockenheim.

Although Hamilton wasn't on pole position, with his Mercedes AMG F1 team-mate Nico Rosberg having taken that distinction, the British driver got off to a good start when the five red lights went out. The fact that he was in the lead after the first corner gave Lewis an advantage, one that he would maintain all the was till the very end of the race, winning by a margin of nearly seven seconds.

Rosberg, on the other hand, had a far from ideal start and found himself down in fourth place, with both the Red Bulls of Daniel Ricciardo and Max Verstappen already ahead of him. Rosberg's race went from bad to worse when he got past Verstappen with a move that raised eyebrows for it forced the young Dutchman off the track at the hairpin. This meant that a five second time penalty was slapped on, which Rosberg was meant to see out during his second pitstop. Things got worse when Rosberg ended up in the pits for longer than was required due to a timing issue by his Mercedes team. There was no recovering from there, and Rosberg had to settle for fourth.

Second place went to Ricciardo, who was on a different strategy to team-mate Verstappen who finished third.

The summer break is upon F1 now, and Lewis Hamilton now heads into the off season with a 19 point lead over team-mate Rosberg.