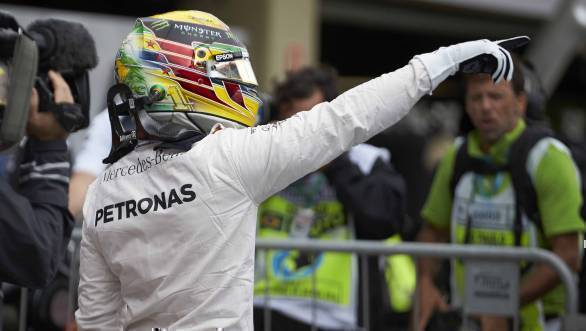 The penultimate F1 race of the 2016 season, the Brazilian Grand Prix, sees Mercedes team-mates and title rivals, Lewis Hamilton and Nico Rosberg closely matched. While it was Hamilton who edged ahead, managing to qualify on pole with a time of 1min 10.736sec, Rosberg had to stay content with second place, having clocked a time 0.102sec slower.

With the two Mercedes drivers locking out the front row of the grid, it does seem like the drivers' title for 2016 could be sealed at the Brazilian GP. Should Nico Rosberg manage to win the race from second on the grid, he will take home the title. However, if Hamilton wins the race, it will mean that the title battle will only be settled at the season finale at Abu Dhabi.

Seventh place on the grid at the Brazilian GP, went to Romain Grosjean in the Haas F1. Nico Hulkenberg took his Force India to eighth on the grid, one spot ahead of his team-mate Sergio Perez. Fernando Alonso rounded off the top 10, taking his McLaren to Q3.

Both the Williams drivers were caught out, being eliminated in Q2. Valtteri Bottas will nonetheless begin the race at the Autódromo José Carlos Pace in Interlagos from eleventh on the grid. While Esteban Gutierrez will start the race from 12th, Felipe Massa will line up in the second Williams in 13th place.

Following Massa, are the two Toro Rossos of Daniil Kvyat and Carlos Sainz in 14th and 15th place. While Jolyon Palmer will start the race in 16th, the only Renault driver to make it to Q2.

Jenson Button in the second McLaren could do no better than 17th place, while Kevin Magnussen lines up 18th on the grid. The two Manor cars of Pascal Wehrlein and Esteban Ocon are 19th and 20th on the grid. While Marcus Ericsson and Felipe Nasr line up 21st and 22nd for Sauber.