It is a terrific time to be in Barcelona. Less than a week ago, Lionel Messi and Co. had the whole city celebrating when they brought the mighty Bayern Munich to their knees in that very city, and now Catalunya is abuzz with the sound of F1 cars. However, even the residents of Barcelona don't expect home hero Fernando Alonso to emerge victorious at the race this weekend. While there's no disputing the driving skill of the double world champion, there's also no point pretending that the McLaren team are going to shape up anytime soon. So, who is most likely to perform well in the upcoming Spanish GP? 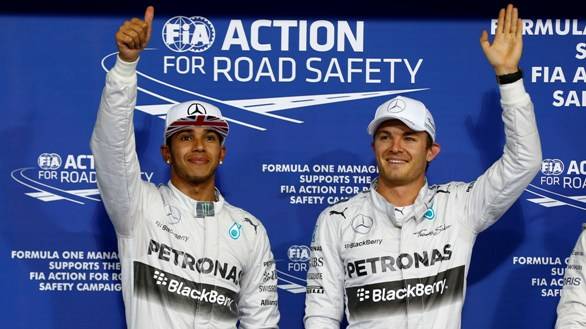 The Mercedes duo, of course, are the two drivers who are most likely to have a strong showing at the Spanish Grand Prix. And we're not basing this on their performance in the 2014 season alone. Look at the first four races of the 2015 season and you'll see that Hamilton has won three of  four races, with Nico Rosberg playing something of a supporting role, making sure that Mercedes AMG F1 is still at the head of the championship standings. Well, there are people who drone on and on about the fact that the team has transformed the past couple of seasons into something of a two-horse race. But it was Red Bull before them for four years, and before that there was that famous era of scarlet wash. So we're not complaining. Between the sparring team-mates who are constantly trying to go one up on the other, and the fact that the rest of the grid is yet to catch up, team boss Toto Wolff is one happy man. For now at least.

What can we expect from the competition? There's some amount of fire that seems to be emerging from Maranello. Let's not forget the Malaysian Grand Prix where Sebastian Vettel managed to come by and take a win. The Ferrari resurgence seems to be in part due to the arrival of new team chief Maurizio Arrivabene, and in part due to the development work that Fernando Alonso had put into the car over the last few seasons. And while the Mercedes pair still look rather strong at the head of the pack, there is a slight chance that Sebastian Vettel and team-mate Kimi Raikkonen, who have a total of five world championship titles between them, can put up a strong fight.

The Williams team seem to be eager to catch up with Ferrari, with team principal Claire Williams admitting that they underestimated the threat from the Prancing Horse. Former Ferrari driver Felipe Massa has notched up points for the Williams team, with Valtteri Bottas one point adrift of his more experienced team-mate.

Daniel Ricciardo from Red Bull hasn't done as well as last year and with rookie Daniil Kvyat only having scored four points till now, the Red Bull bosses aren't thrilled. And the threats that they will leave Formula 1 have resurfaced.

Unfortunately for McLaren, there hasn't been too much positive news. We really hope that Alonso and Button finally manage to rake in some points in and begin their escalation on the constructor's table.

So, what of the Spanish GP, then? Well, Mercedes and Ferrari appear to be the ones to watch out for. Come Sunday, and we'll know the rest.