Finally a high-point for Frank Williams and the Williams team. The team that has long championed the cause of the privateer has had a tough few seasons in Formula 1. And given that the 2014 season seems to be one where the Silver Arrows are reigning supreme (the Red Bull win at Canada notwithstanding) it did come as a surprise to plenty of people that it was the Williams team that took to the front of the grid at Austria. 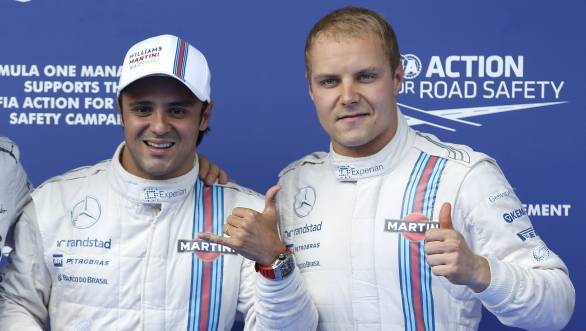 In Q3, it was Valtteri Bottas who set the fastest time after the first couple of runs. It appeared as though Nico Rosberg and Lewis Hamilton would end up bettering their times, but that didn't happen. Hamilton spun on Turn 2, scuppering his team-mate's chances of improving his time.

Felipe Massa managed to beat Bottas' time by less than 0.1 seconds. It was Massa's first pole since 2008. Rosberg had to settle for third on the grid behind the Williams pair, while his Mercedes team-mate Hamilton will start ninth on the grid.

Further down the order, Sergio Perez loses his 11th spot on the grid, due to the grid penalty he incurred in Canada for the crash with Massa. Vettel, who qualified no higher than 13th now moves up to 12th.