Lewis Hamilton seems to be making it something of a habit to win everything in sight in 2014. The British driver took a lights-to-flag victory at the 2014 Spanish Grand Prix ahead of team-mate Nico Rosberg, his fourth consecutive win this year. It is the first time that Hamilton has achieved four consecutive race wins in his career. The win at the Circuit de Catalunya puts him ahead of Rosberg in the championship standings for the first time in 2014. 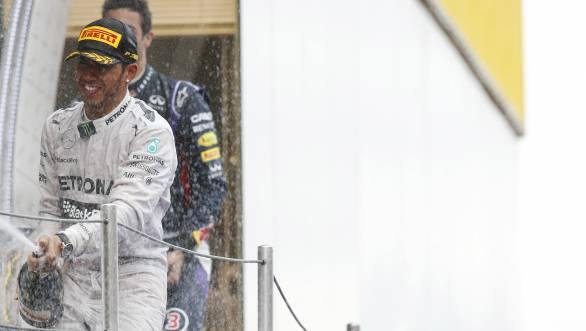 Rosberg, who had to be content with second place, did try hard to get past Hamilton, putting him under immense pressure towards the closing stages of the race. But even though he managed to close the gap to his Mercedes AMG F1 team-mate to around half a second, it wasn't enough to snatch victory away from him.

Finishing third was Red Bull driver Daniel Ricciardo. The Australian lost third spot during the race to Finn Valtteri Bottas in the Williams, but managed to leapfrog him during the first round of pitstops. And even though Bottas made a valiant attempt to keep Sebastian Vettel behind him, the four-time world champion eventually worked his way past him towards the end of the race. Vettel had something of a heroic race, starting  15th and then using a three-stop strategy to get to fourth place by the end of the 66 laps.

The other driver on a three-stop strategy was Ferrari's Fernando Alonso who made it to sixth place. Alonso had the Spanish fans cheering rather loudly for him as he muscled past Ferrari team-mate Kimi Raikkonen who finished seventh. Eighth place went to Romain Grosjean who scored the first points of the 2014 season for the Lotus team, while it was Force India drivers Sergio Perez and Nico Hulkenberg who completed the top 10.

Lewis Hamilton now leads the drivers' championship with 100 points, three points ahead of team-mate Nico Rosberg who is currently on 97 points. Alonso, with 49 points, trails in third place.