What is it about Sepang and rule changes? Remember back in 2009, when the then radical changes to Formula 1 brought in the V8 engines? Well, the heavens opened up and seemed to express their displeasure about the fact that the V10 engines had been dispensed with. Perhaps it was something similar that led to the torrential rain during the Qualifying session for the 2014 Malaysia Grand Prix. Before Q1 could start, the V6 engined, unusual looking Formula 1 cars were parked in their garages, and the rain just came right on down.

Before the qualifying session, though, it was Nico Rosberg who had managed to set the fastest time during FP3, repeating his performance of FP2. The fact that his team-mate Lewis Hamilton had set the fastest time during the first Free Practice session bode well for Mercedes. Going into qualifying the Silver Arrows were looking strong once again. Like they had in Australia, and in pre-season testing before.

It was a full 50 minutes after the intended time of the start of Q1, that the track was finally given the go-ahead for the session to begin. With rain still falling on the circuit intermittently, qualifying became rather trying for teams and drivers alike. While the teams were busy focussing on weather forecasts and the choice of tyres - intermediates or wets, drivers were trying to keep things in control and not slide off into the gravel. Unfortunately for Caterham's Marcus Ericsson, he wasn't able to do quite so stellar a job of it, getting things wrong at the exit of Turn 3, crashing into the barriers before finally ending up back in the middle of the track, debris strewn all across it. The red flags came out, and it was a premature end to Q1. The drivers who weren't able to make it to Q2 were Pastor Maldonado whose Lotus still appears to be struggling, Adrian Sutil, Jules Bianchi, Kamui Kobayashi, Max Chilton and finally the hapless Ericsson.

Q2 was no less eventful, with Daniil Kvyat ending up right in the spot Fernando Alonso wanted to put his Ferrari. The poor visibility meant that there was nowhere for Alonso to go, leaving the Ferrari driver with damaged front suspension. Nothing that the Scuderia couldn't sort out in record time, ensuring that Alonso was back on track to complete the session. At the end of Q2, it was Daniil Kvyat, Esteban Gutierrez, Felipe Massa, Sergio Perez, Valtteri Bottas and Romain Grosjean who were knocked out.

For Q3 the drivers all opted for wet tyres, with McLaren switching to intermediates midway through the session. A plan that really didn't pan out all too well for them - Button could do no better than 10th place on the grid. Immediately ahead of the Briton is Frenchman Jean-Eric Vergne, the lone Toro Rosso driver who managed to make it to Q3. Button's young and very fast Danish team-mate will start the race two spots ahead of him in eighth position. Nico Hulkenberg took his Force India to seventh on the grid, just behind Ferrari's Kimi Raikkonen. The Iceman's team-mate, Alonso ended up with the fourth fastest time, followed closely by Daniel Ricciardo who finished the session fifth fastest.

The front of the grid wasn't that surprising though. Both the Mercedes drivers made it to the top three, with Lewis Hamilton taking pole and Rosberg finishing third fastest. They are split by the Red Bull of Vettel, who, despite an ERS scare during the first session, managed to recover and will start the race second on the grid. 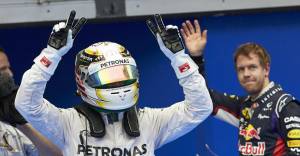 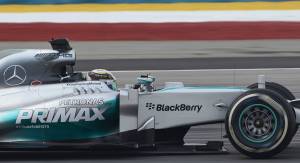 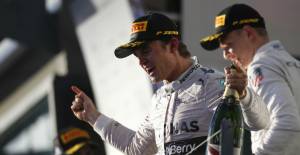