Going into the 2014 Spanish Grand Prix, in an attempt to combat the incredible domination of the two Silver Arrows, teams up and down the grid introduced a whole host of updates. Defending world champions Red Bull brought in a major engine upgrade in a bid to improve their showing. However, there was simply no stopping the Mercedes team - this was in evidence from the very first free practice session on Friday. Lewis Hamilton clocked the fastest time during FP1, followed that up with fastest time during FP2, and narrowly missed out on repeating this feat in FP3, when the honour of fastest time went to his team-mate Nico Rosberg. However, even though it was Rosberg who would set the fastest times during Q1 and Q2, pole went to Hamilton with a timing of 1min 25.232secs in Q3. It was his fourth pole of five grands prix in 2014. 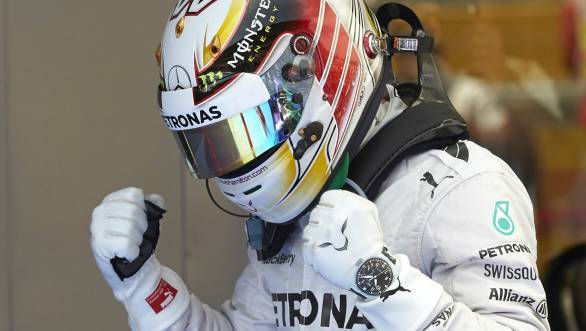 Pole at Catalunya is Hamilton's fourth of five races in 2014

Qualifying second on the grid was Hamilton's team-mate Nico Rosberg, while Red Bull Racing's Daniel Ricciardo qualified third. Meanwhile, Ricciardo's high profile team-mate, four-time world champion Sebastian Vettel had a continuing run of bad luck. After sitting out FP2 on Friday, Vettel's car lost drive during Q3, and he stopped dead on track causing the session to be temporarily red flagged. The fact that he wasn't able to set a time during Q3 means that Vettel will start Sunday's race 10th on the grid.

It was a good qualifying session for Williams driver Valtteri Bottas who lines up fourth on the grid. And while Romain Grosjean has only managed a fifth place starting position, it is the best qualifying position that the ailing Lotus team has managed to achieve all season, which means the smile on young Grosjean's face post qualifying was more than understandable. Ferrari driver Kimi Raikkonen managed to outqualify team-mate and home hero Fernando Alonso, with the two scarlet cars finishing sixth and seventh on the grid. Jenson Button brought the first of the two McLarens home eighth, while Felipe Massa was ninth in the second Williams.

It was a tough qualifying session for the two Force India drivers, with Nico Hulkenberg taking eleventh spot on the grid, followed by team-mate Sergio Perez. How Force India performs in Spain will be crucial to their chances in the Constructors Championship, where they currently lie in third place ahead of Ferrari.