The 2014 Canadian GP was something we thought would be a little predictable. After all Nico Rosberg was on pole, followed by his Mercedes team-mate Lewis Hamilton. And given the sort of domination the two drivers have enjoyed this season of Formula 1, it seemed unlikely that there was much else to expect from the race at Montreal. Well, for once though, Formula 1 really did deliver the goods. And it started from the very beginning of the race. 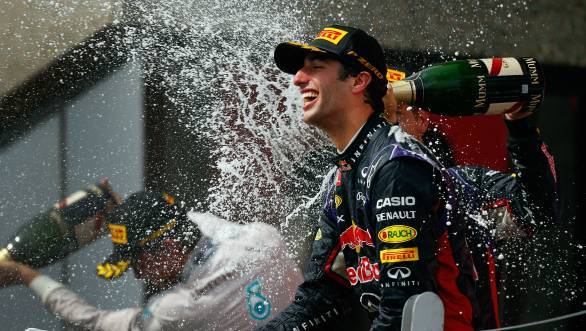 When the five red lights went out at Montreal, the scuffle into the first corner saw Lewis Hamilton lose a spot to Sebastian Vettel. Rosberg managed to get away still at the head of the order, while the Safety Car was deployed on the very first lap of the race when Marussia drivers Max Chilton and Jules Bianchi collided with each other. Of course the collision meant that Chilton ended the record he's held of finishing every single race his Formula 1 career, and it also meant that he ruined things for his team just one race after they managed to score their first points. But the most crucial result of the crash was that the Safety Car had to be deployed while the debris was cleared.

Once the race was restarted, Hamilton managed to get the jump on Vettel and set off in pursuit of his team-mate. It really was beginning to look like another one of those races. Then, however, it emerged that the two Mercedes-powered cars were low on, well, power and they ended up dropping back behind the Williams of Felipe Massa after the first round of pitstops. Hamilton had trouble with his car and overheating brakes and retired from the race, while Rosberg, despite the fact that there was nothing that could be done to resolve the engine issues, carried on at the head of the pack.

The Red Bulls of Daniel Ricciardo and Sebastian Vettel meanwhile had worked their way up the grid. Ricciardo was the man on the move, getting past Sergio Perez in the Sahara Force India and then getting ahead of Rosberg too using DRS. And while Vettel had managed to move into third place, he only just managed to hold on to that spot when a collision between Sergio Perez and Felipe Massa nearly collected him. The Safety Car was deployed and the team radioed Ricciardo to inform him that he was going to win the race, something he hadn't really processed up until that point. Nico Rosberg tailed him in second, with Seb Vettel third.

But it was the man on the top step of the podium who was ecstatic, trademark wide grin and all. The Australian declared that his first Formula 1 win (the podium at Melbourne had been taken away from him, remember?) felt surreal.

Meanwhile in the championship standings, Nico Rosberg still leads with 140 points, with Lewis Hamilton second on 118, while Daniel Ricciardo now moves into third place with 79 points. The Constructors Championship still sees Mercedes GP at the head of the order with 258 points, with Red Bull second on 139 points and Ferrari, with 87 points, third.