Benelli have a Scrambler ready. No, we are serious. The Chinese-owned Italian company unveiled the Leoncino, its Scrambler take at the 2015 EICMA show in Milan. While outright the proportions look similar to the Ducati, there are differences in the powertrain and other features. The Benelli Leoncino boasts a 499.6cc parallel twin cylinder, liquid cooled engine which makes 47.6PS and 45Nm. The engine transfers the power to the rear wheel through a conventional chain drive and a 6-speed transmission. Benelli says that the engine meets Euro 4 norms. Built on a trellis frame, the Benelli Leoncino has USD forks with 50mm travel, and a monoshock with preload adjustment at the rear. Double 320mm discs with 4-piston radial calipers at the front and a single 2602mm disc at the rear handle braking duties. ABS comes as standard on the Leoncino. True to the scrambler roots, the Benelli Leoncino has knobby tyres with the front ones being 110/80- R19 in size while the rear is a fatter section 150/70 - R17. 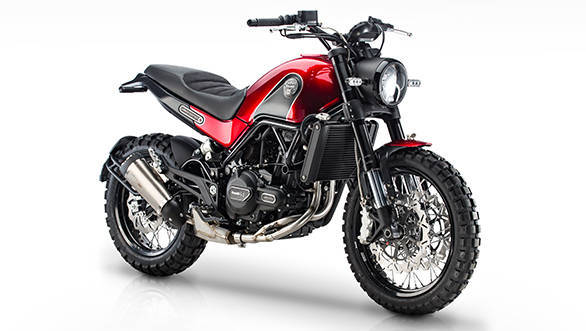 On the style front, there is that LED headlamp and a lion of Pesaro badge on the front fender. Then there are the flat handlebars and a flat seat. The single exhaust pipe has twin outlets though. Benelli says that the motorcycle goes into production from the second half of 2016 and on sale soon thereafter. Benelli though didn't say anything about their DSK-Benelli India operations. We however expect the Leoncino to make an appearance at the 2016 Auto Expo.

For more stories from OVERDRIVE on the 2015 EICMA motorcycle show, click here