The fourth stage of the 2020 Dakar Rally proved to be an excellent stage for Hero MotoSports Team Rally, and it helped the Indian outfit blow past their hardships of Stage 3. Over the course of the 453km special (with an additional 219km liaison), that led from Neom to Al-Ula, all four riders managed to put in strong performances. 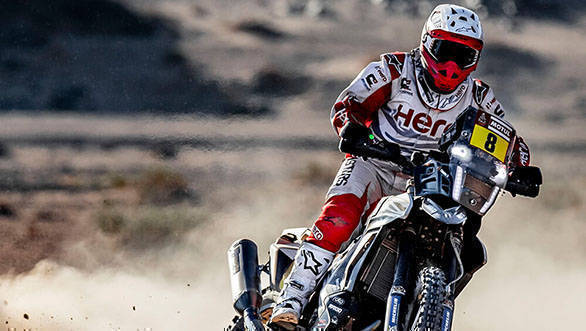 The most impressive of these performances, undoubtedly, came from Paulo "Speedy" Goncalves. Stage 3 was a true test of Paulo's resilience and determination. He was stranded in the desert for five and a half hours when technical issues hit his motorcycle, following which he needed to repair his engine with spare parts that had been delivered to him by another competitor, and then had to ride in the dark to make it to the end of the stage. The Hero team then soldiered on through the night, determined to give their rider a stellar bike for the Stage 4. All the hard work paid off, and Goncalves was on fire (metaphorically) during the fourth stage of the rally. He played it safe during the first part of the stage, because of the dust and visibility issues, after which when he got to the dunes, he began to fly. He managed to end the stage fifth, and then was elevated to fourth position when stage winner Sam Sunderland was hit with a penalty for speeding.

Speaking of his stage, Goncalves said, "After refuelling, so around the 200km mark there was more visibility so I started to push a little more. The special was very long with a lot of navigation, a lot of trial, and I am happy to arrive with a good stage position. So I think it is good for the motivation after yesterday. And also for the Hero team because they work a lot to get the bike ready. And we just go ahead stage by stage, day by day, to do the best as possible."

Speaking of doing the best that one can, it seems like it was this very spirit that his team-mates also carried within them. German rider Sebastian Bühler managed another strong stage performance, finishing 21st. This puts him 20th in the overall standings. "It was a very tough day - long stage, fast tracks, and a lot of stones. But it all was very good. At the finish it was difficult to navigate, so I go very slow to not make a mistake and to find all the waypoints," he said. 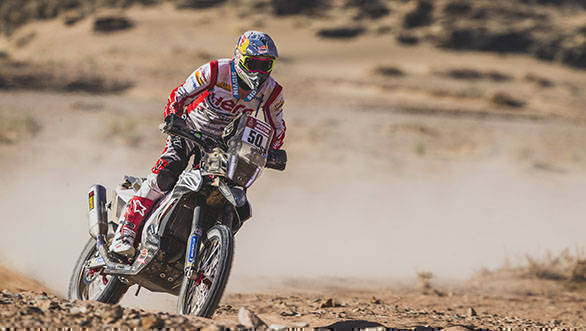 Meanwhile, CS Santosh also did well to finish 45th in Stage 4, moving up to 44th in the classification because the "Dakar Experience" riders' stage positions are eventually eliminated from the finishing list. This means that Santosh moves up to 42nd position after four stages of rallying. The good news for the Indian rider is that his injured hand is recovering well, allowing him to ride much better, and also allowed him to have fun while riding.

"For me, the stage was pretty good. In the beginning there was a lot of dust, and then the stage opened and in the desert I had the chance to pass some people. I had a lot of fun today on the stage. The stage had a lot of rocks, and a lot of high-speed sections as well. And I made considerable time. I think I made one mistake where I got lost a little bit, but overall my hand is feeling much better. I have a lot of strength in my hand again. And I'm looking forward to the next couple of days in the Dakar, and it's about to get more uncomfortable. That's what happens!" said Santosh.

Joaquim "J-Rod" Rodrigues, who isn't in the running for an overall position in the Dakar, but is still competing in the "Dakar Experience" category, continued his strong form. He finished 23rd in the stage. "I got lost in the messy nodes between the canyons before the refuel point and lost some time there. Then I decided to focus on my cap readings and managed to get back on the right track. Towards the end also I lost some time in finding the secret waypoint but in the end it was a good training, and my speed was also good so I am happy with that," he said.

Stage 5 will take participants through a 211km liaison, and 353km special, between Al-Ula and Ha'il.