Stage 2 of the 2019 Dakar began in Pisco on the 8th of January, and ended in San Juan de Marcona. Competitors covered a distance of 552km, which included a 342km long special. While the cars started the stage first, the challenge was fairly high for the competitors in the Moto category, who had to deal with multiple tracks and dug up stages in the wake of the four-wheelers.

Hero MotoSports Team Rally had a tough day of rallying, but the team's three riders overcame various hurdles and finished the stage. 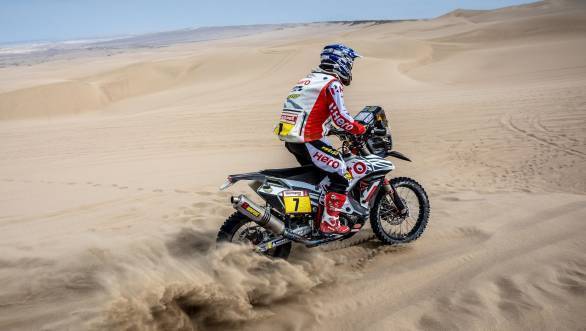 Oriol Mena (No.7) rode well to finish the second stage of Dakar 2019 17th, putting him 16th overall in the Moto category

Leading the way was Oriol Mena, who managed to end the stage in 17th place. Following his 14th place finish in Stage 1 on the 7th of January, Mena is now ranked 16th overall in the Moto category. Speaking of his performance in Stage 2 Mena, who rides the No.7 450RR, said, "Today was a really good stage for me. The stage had a mix of hard piste, dunes and some seaside as well, so it was interesting to ride. It was a crazy fast stage but I felt good today and the bike performed perfectly. So another day in the bag and that's what matters for me." 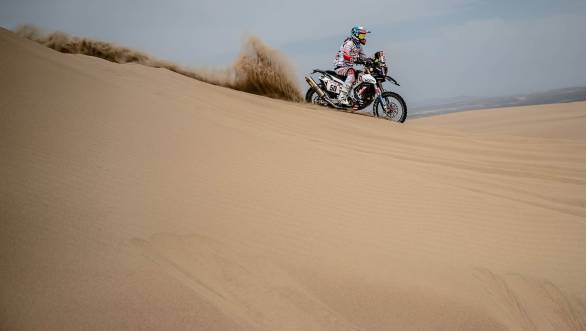 Hero MotoSports Team Rally's CS Santosh (No.50) in the dunes for Stage 2 of the 2019 Dakar

Home hero, CS Santosh, who impressed with a top 20 finish in Stage 1 had a far more tricky outing in Stage 2. Santosh lost time when, sensing an issue with his clutch, he was forced to ride cautiously in the second half of the stage. This meant that he ended the second stage in 37th position, and is ranked 33rd overall in the Moto category after two days of rallying. "Day 2 for me started really well and I had a good rhythm going for the first 80 to 90km. Then on I started sensing some trouble with my clutch, and decided to ease off to make it to the finish line safely. Had a good stage today and now we fix the glitch and go racing again tomorrow," said Santosh, who rides the No.50 450RR. 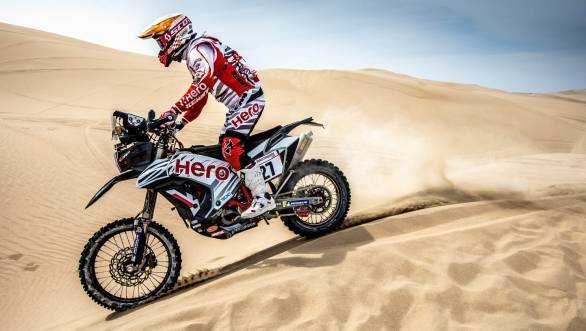 Meanwhile, technical glitches plagues comeback kid Joaquim 'JRod' Rodrigues too. JRod had to stop along the way and deal with a fuel issue, which cost him a lot of time. He ended the second stage 34th, putting him 32nd overall in the Moto category after two days of rallying. "I started the stage well but soon I developed a fuel issue. I had to stop to fix that and somehow make it to the refuelling point. I lost a lot of time in the process. After making it to the refuelling point, I pushed hard, got into a good rhythm and made up some time as well," said JRod. "Overall I am happy to finish the stage today and look forward to tomorrow," he continued.

For Stage 3 of the rally, which will be held on 9th January, the competitors head to Arequipa for a 799km long stage, including 331km of liaison, with many tricky sand dunes to deal with.

More about Hero MotoSports Team Rally at the Dakar:

Interview: CS Santosh on the challenges that lie ahead at Dakar 2019

The brutal truth: CS Santosh on life after his fourth Dakar Rally