Kia India has sold 16,111 units in April 2021. The Korean carmaker recently when through an extensive rebranding and has launched refreshed versions of its most popular offerings, the Kia Seltos and Kia Sonet SUVs. However, the company has seen sales slip by 16 per cent from last month when it sold 19,100 units.

This slid should be down to the much heavier second COVID19 wave sweeping through the country. This has meant more restrictions in movements and dealerships remaining shut.

Despite the downturn, Kia India has become the fastest to reach the 2.5 lakh sales mark in the country. It completed this feat in 22 months. The Kia Seltos has been the biggest contributor to this, selling over 1.8 lakh units since its launch. The Kia Sonet has also been a success, selling over 70,000 units in 8 months.

In the past month, the Kia Seltos remained the mainstay for the brand. This SUV sold 8,086 units followed by 7,724 units of the Sonet. The Carnival MPV garnered 301 buyers. Kia Motors India has rebranded itself to Kia India with its new logo and has confirmed a new seven-seater model slated for launch in early 2022. Meanwhile, the company is also expanding its touchpoints and production capacity in the country. Kia has also added more features to the top and mid-spec versions of the Kia Seltos and Sonet as part of these changes. 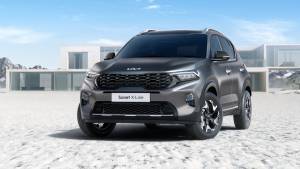