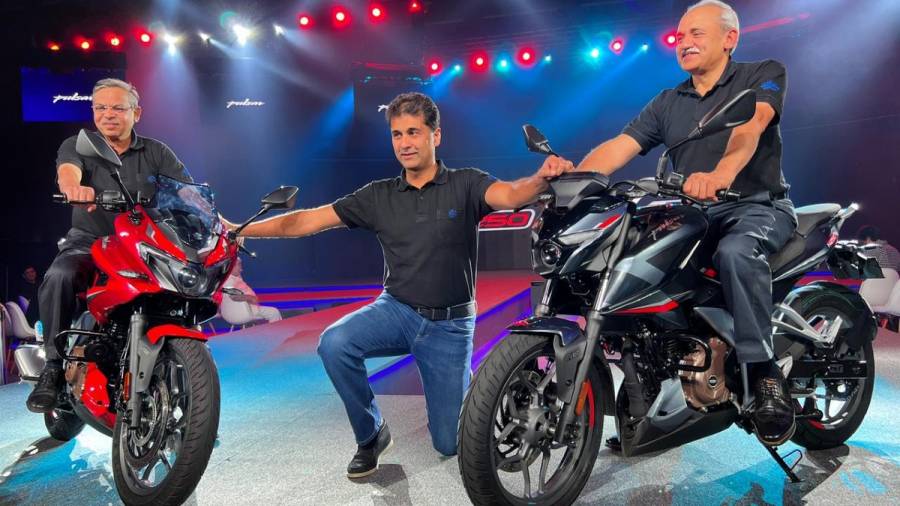 There are not one, but two Pulsar 250s on offer - the N250 street naked and the F250 quarter-faired motorcycle. Save for these form factors, the two motorcycles are a big departure from the Pulsar lineage we know of so far. The Pulsar N250 is much sleeker than its 200cc counterpart and features sharper and longer tank shrouds that are more low-slung too. The headlight has a much sleeker design and features moulded crown that houses an all-new three-pot instrumentation console.

The F250 on the other hand wears a quarter-fairing - a form factor similar to the 220F. But variant too features a much sleeker and sharper design. The vertical twin-pot headlight design of the 220F isn't carried over and instead, the headlight assembly looks similar to the N250 sibling. The F250 features a translucent dark visor, which appears smaller and has a clean, floating design with no visible bolts. The turn blinkers sit higher up than the 220 and are LED. The 250F continues to use non-adjustable clip-on handlebars, while the N250 uses a conventional, flat and wide handlebar.

Both motorcycles have a common, sharp tail section, reminiscent of the Pulsar models from the late 2000s. It features split grab rails and the signature twin slat taillights, albeit with a boomerang shape now. A floating bracket holds the registration plate and the rear blinkers, while the mudguard is a two-piece wheeler-hugger type unit, mounted on the swingarm, like the compact saree guard. The stubby, twin-port, upswept exhaust canister, much similar in design to the Dominar 250, completes the look.

Adding a sporty touch are the belly pan, there are only two colour options but dual-tone paint schemes with many matte-black panels as on the Dominar, mesh inlays in the side panels and tank shrouds like the older Pulsars and ten-spoke 17-inch wheels - which are elements common to both the Pulsar 250 twins.

Both motorcycles feature LED lighting all around and the headlamp is the bi-beam projector type. The tank has a 14l capacity and features a USB port on its leading-edge for both motorcycles. The instrumentation doesn't seem to be as modern as one would expect and features a 3-pot layout with a simple LCD and an analogue tachometer.

The go for the new Pulsar twins comes from a new 250cc single-cylinder engine which is oil-cooled and features a free-standing oil cooler between the tank shrouds. This is an all-new engine that is expected to power a slew of upcoming products from Bajaj and features a simpler layout and construction than its counterpart in the Dominar 250 to keep the costs in check.

The Pulsar 250 twins ride on a tubular cradle-frame like the 220F with no down-tube, instead of using the more expensive perimeter frame like the 200NS. The frame is suspended by 37mm standard telescopic forks, a pre-load adjustable rear mono-shock and a conventional box-type swingarm. The new Pulsar 250s tip the scales around the 162-164kg mark.

The new Bajaj Pulsar also has a seat height of 795mm and a ground clearance of 165mm.

Endurance - a supplier of big local and global presence, and known for its forging and casting expertise, work closely with Bajaj for wheels, chassis and suspension systems. In 2020, Endurace acquired the Italian firm and its long-time supplier Grimeca which is known for its braking products for motorcycles and light vehicles. These brakes find their way onto the new Pulsar 250s as well, replacing the Bybre brakes that have served the Pulsars for years. Upfront is a single 300mm disc, and the rear features a 230mm disc, equipped with single-channel ABS. The front tyre is 100/80-17 while the rear tyre of the new Bajaj Pulsar is 130/70-17.