Audi has unveiled prototypes for the Audi e-tron S and e-tron Sportback S EV SUVs. These are more powerful versions of the e-tron SUVs already available and come with a host of upgrades to their electric drivetrains. The most notable of these is a world-first three-motor set-up and a Dynamic mode that allows for easier drifts. 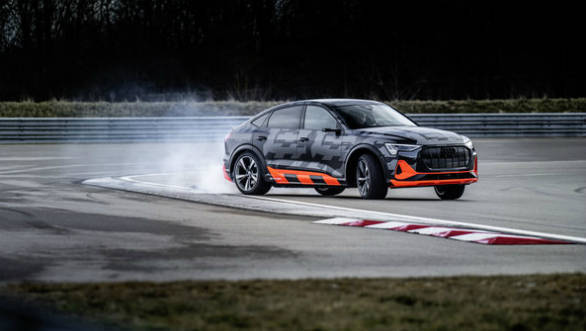 For the S models, Audi has moved the larger electric motor from the standard e-tron's rear axle to the front, while there are two of the standard SUV's smaller front motors on the S' rear axle. The larger motor makes 169PS in Normal mode and 204PS on Boost. The two rear motors together make 266PS and 359PS (Boost). The combined power output for the S models now stands at 435PS and 808Nm. With the Boost mode engaged, this jumps to 503PS and 973Nm. The e-tron S and the e-tron Sportback S now get from 0 to 100kmph in 4.5s and can reach a top speed of 210kmph. The standard e-tron's outputs are 313PS and 540Nm. This version has a 190kmph top speed and gets to 100kmph from standstill in 6.8s. 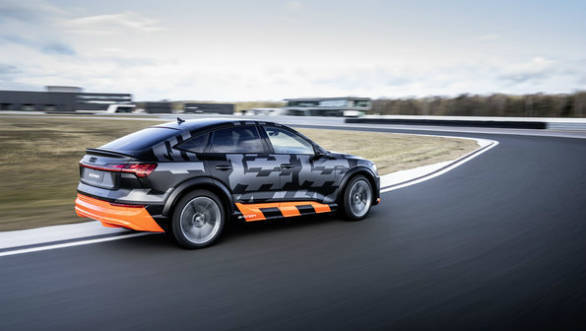 The three-motor set-up has now allowed the S models to feature electric torque vectoring. In regular driving, only the rear motors are in operation, with the front motor coming into play only when more power is needed. Each of the rear motors sends power directly to each rear wheel via a transmission, negating the need for a mechanical differential. This also allows the Quattro system to send power to the rear wheel with more grip during tricky situations. A further development for the S models is the more drift-happy traction control system, which allows for longer drifts when the ESC stabilisation control is set to "Sport" and the Audi drive select dynamic handling system is set to "Dynamic" mode. 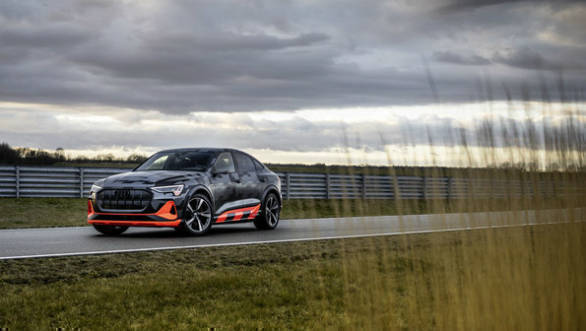 The e-tron S and e-tron Sportback S also get subtle styling changes to differentiate from their standard versions. They get 20-inch wheels in a five-spoke design as standard, with sizes up to 22-inches available. Also new are the new front and rear bumpers. They are heavily contoured with a diffuser insert that runs almost the full width of the vehicle The bumper is flanked by bigger and more expressive air curtains, which improve airflow. These extend into wheel arches that are 23mm wider. There are silver-coloured elements around the fac of the car, and an option, certain detachable body panels can be painted in a contrasting shade. The digital Matrix LED headlights that debuted on the e-tron Sportback can also be optionally fitted.

The Audi e-tron S and e-tron Sportback S EV SUV are expected to be launched globally later this year, and will eventually be available in India. Prices are expected to start from Rs 1.5 crore.