These are tough times for all businesses, and with the print media industry relying on advertising revenue, it's especially trying with no printing or distribution heavily affecting those revenues. Despite being classified as an essential service, the production and dissemination of magazines has been put completely on hold, with several publishers already having resorted to reducing page counts, or skipping issues completely. But with no clarity on when the backbone, i.e the distribution network of railways and local courier services, will be up and running, it is prudent that publishers seek help to make sure that the livelihoods of all dependent aren't affected. 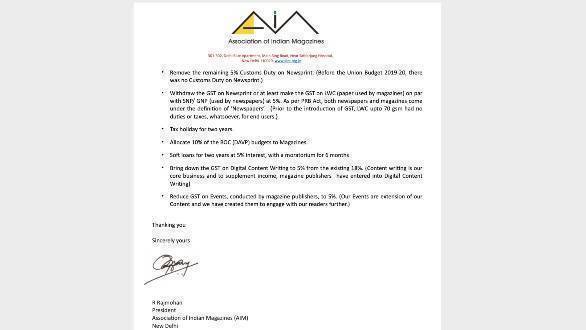 The president of the Association of Indian Magazines (AIM), R Rajmohan, has thus appealed to the Finance Minister, outlining a set of steps that could help magazine publishers bring their businesses back on track. These include removing the 5 per cent customs duty on newsprint, lowering of GST on digital content writing from 18 per cent to 5 per cent, apart from withdrawing GST on newsprint or make GST on the paper used by magazines to the same level as that used by newspapers. Also included is a request for an allocation of 10 per cent of the BOC (Bureau of Outreach & Communication) budgets to magazines, a tax holiday for a period of two years, as well as a provision for soft loans at 5 per cent interest, with a moratorium of six months. It is hoped that the measures in the requested bailout package will help save the magazine industry in India.