The 2021 Ford Bronco is finally revealed, and is available in a four-door version for the first time ever. Ever since the last Ford Bronco rolled off the production line in 1996, rumours have been rife with its return, with Ford itself hinting at a new model with a concept in 2004 and more recently in 2016, even confirmed as much. 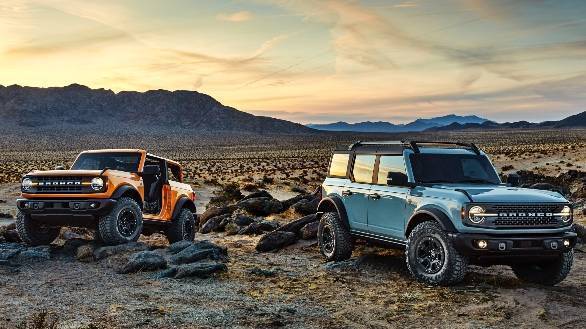 With the new fifth-gen Bronco hoping to reignite a long-held tradition as a worthy opponent to the Jeep Wrangler, Ford's designed- and built-in-America lifestyle off-roader has a little of everything  from nostalgia to retro-cool. The original Bronco was conceived of as a Mustang that could go anywhere, and the new Bronco features plenty of bucking Bronco badges and easter eggs around the car, apart from a design that emulates the original. Apart from the stance and general proportions, cues such as the LED DRLs inset to the round headlights and hood tie-downs that Ford calls Trail Sights, the 2021 Ford Bronco clearly has family ties. 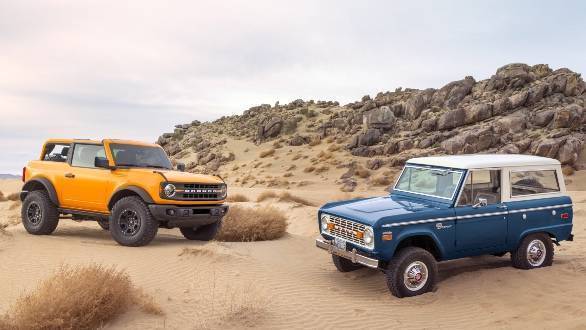 Those ties continue inside the Bronco, with instrumentation inspired by the original's. Fully modernised, the 12-inch touchscreen infotainment with Ford's SYNC 4 software gets OTA updates and offers the perk of the FordPass Performance app and onboard topographic trail maps, which owners can use to plan, navigate and share their trail adventures. Of course, the roof panels are removable, as are the frameless doors, while washable interiors are a given, with rubberised switches around the cabin protected against the ingress of water. Importantly, an integrated rollcage and curtain airbags up the safety quotient, as compared to its chief rival. 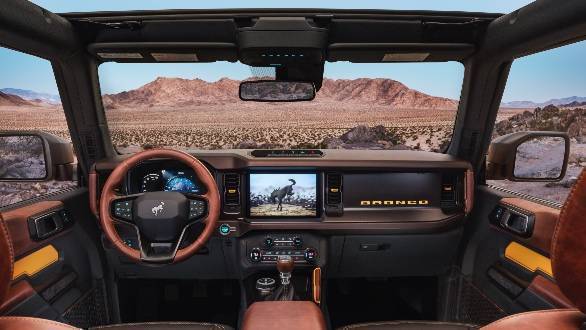 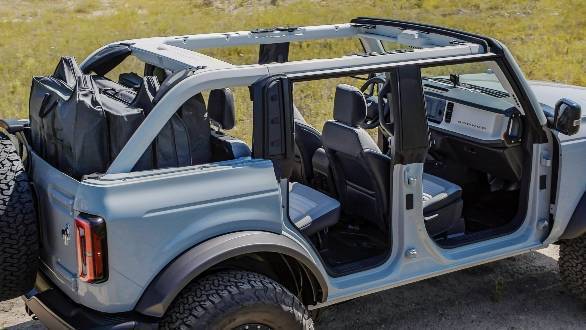 Available in two- and four-door versions (first for the latter), the body-on frame Bronco's dimensions go from 4,412mm to 4,839mm in length, with a wheelbase between 2,550mm and 2,949mm respectively, making it larger outright than the Jeep Wrangler (JL), though the four-door rides on a smaller wheelbase which gives it a better breakover angle. Accordingly, a best approach/departure angle of 43.2/26.3 degrees is possible, with the Bronco's capabilities extending to an incredible fording depth of 850mm. The big news is independent front suspension (and independent Dana AdvanTEK differential with optional electronic locking unit) paired with a solid mulit-link rear axle (and a Dana 44 diff with optional electronic locking unit). Also available are Bilstein's top-of-line Position Sensitive dampers. 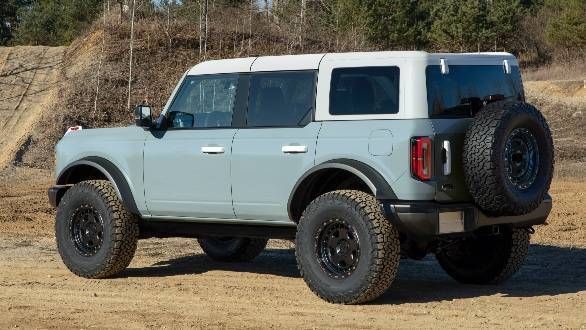 With seven trims to choose from, the new Bronco's ground clearance goes from 231mm to 295mm as you go up in wheel size from the standard 16-inch with 30-inch tyres to 17-inch wheels with 35-inch tyres. Top-of-line variants (Sasquatch, Wildtrak, First Edition) wear 315-section Goodyear M/Ts! 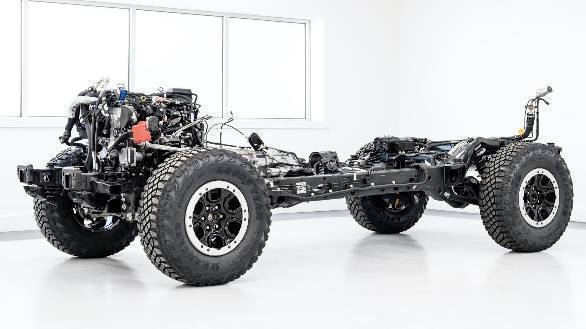 Powering the Bronco will be a choice of two EcoBoost turbocharged petrol engines, but sadly no V8. The first is a 2.3-litre inline four-cylinder producing 270PS/420Nm, offered with either a Getrag 7-speed manual (6+1 crawler gear) or a 10-speed automatic. The second engine, a 2.7-litre twin-turbo V6 making 310PS/542Nm is only offered with the 10-speed auto. The Bronco, expectedly, makes use of a selectable 4x4 transfer case, with a 2.72:2 low ratio, while the manual's crawler gear takes the crawl ratio up to 94.7:1, a step up from the Wrangler Rubicon's 77.2:1 ratio, for those wondering. 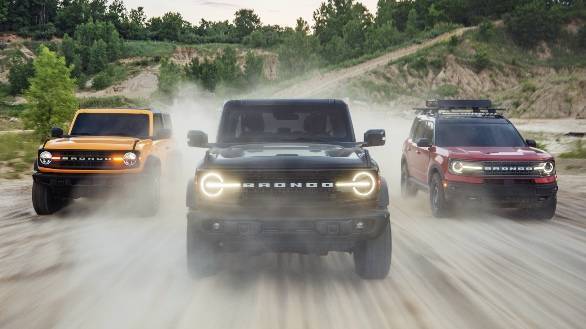 While the base 2021 Ford Bronco is priced at $30,000 (Rs 23 lakh converted), that price doubles to $60,800 (Rs 46 lakh converted) for the First Edition model. Alongside the new Bronco, Ford also showed off the Bronco Sport, a less hardcore crossover based on Ford's Escape crossover. The Bronco is set to go into production soon, with deliveries slated to begin next year.