Strengthening their patrolling vehicle fleet, the Andhra Pradesh police recently inducted the first batch of the 242 Mahindra TUV300 SUVs into its fleet.

The first batch of these vehicles were inducted into the force by Chief Minister Chandrababu Naidu in a flag-off ceremony held at IGM Stadium, Vijaywada. The company says that this development builds on the Mahindra legacy of associating with India's paramilitary forces. Numerous state police forces like in Mumbai, Rajasthan, Kerala and Arunachal Pradesh have already inducted the TUV300 in their fleet. We think the car's ruggedness, efficient engines, relatively small footprint and competitive pricing may have been factors. 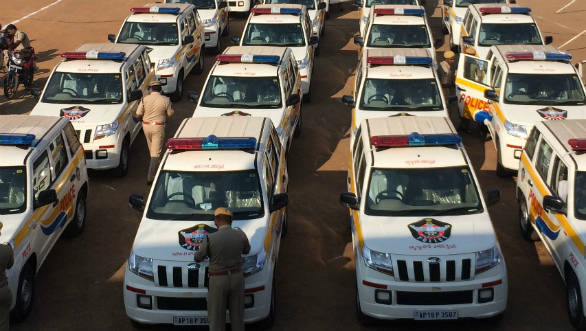 The police-spec TUV300s are white, with yellow and blue graphics and have the police force's emblem stuck on. There is also the LED light bar on the roof. Mechanically, the cars remain unchanged and are powered by the mHawk100 motor. This is a twin stage turbocharged 100PS/240Nm 1.5 litre diesel engine mated to a five-speed manual. The SUV sits on a ladder-frame construction.