After a couple of leaks in the past couple of weeks, Suzuki has officially revealed the all-new, third-generation Hayabusa. Building upon a successful legacy, the 2021 Suzuki Hayabusa comes with an updated engine, lighter chassis, advanced electronics and of course, a sharper bodywork that boasts of improved aerodynamics. The third-generation Hayabusa also features new instrumentation with a larger digital display for readouts about selected modes and electronic aid. It also features a prominent read-out for the lean angles achieved

Let us begin with the headlines - the new electronics suite. The 2021 Suzuki Hayabusa now comes with the Suzuki Drive Mode Selector Alpha - which is a step-up from the SDMS seen on bikes like the new V-Strom. It allows three factory set riders modes - A, B and C, and allows up to three rider-configurable modes - U1, U2 and U3. The electronics suite uses a six-axis IMU from Bosch, which is responsible for assists like a ten-step anti-lift control, engine braking control, and a lean-angle sensitive ten-step traction control system. Also onboard is a launch control system for drag racing junkies, cornering ABS, Hill Hold and Slope Control functions (very thoughtful) and cruise control. Two segment-first features include an active speed limiter which allows you to accelerate and decelerate as you please within a set speed limit; and an Emergency Stop Signal, which automatically flashes the hazard lights under emergency braking from speeds of 55kmph or higher. Interestingly, this particular feature will not be available on the India-spec model. 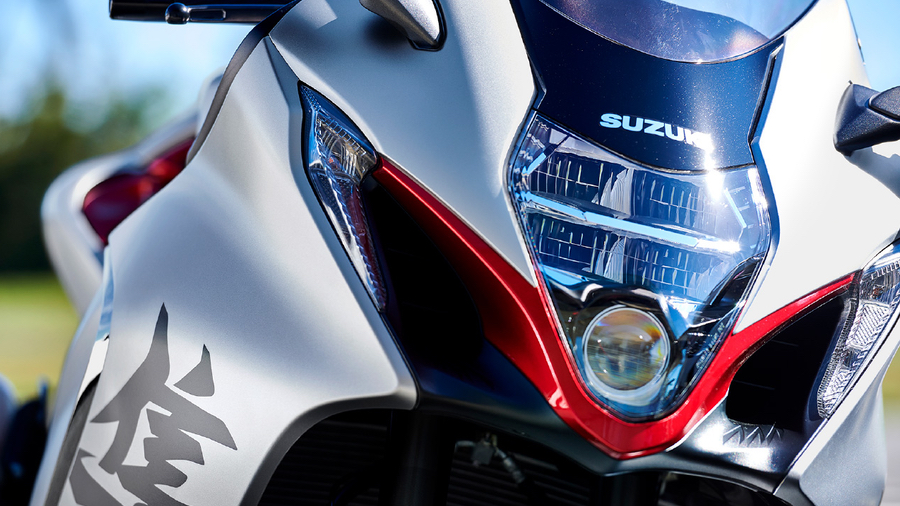 Moving on to the design, a black and bronze two-tone scheme is the official communication colour for the third-generation Hayabusa, and the kanji on the side fairings has a more angular font. Other two colour options include white-and-red and white-and-black. The iconic face of the Hayabusa has evolved with sharper features. The stacked headlight design has been refined further, while the turn blinkers that flank it act as white daytime running lights, that blink amber when the turn-indicator function is used. The trademark stacked taillight seen on the first two generations of the Hayabusa, however, makes way for split vertical taillights with integrated turn blinkers. Interestingly, the fuel tank capacity has been reduced from 21l to 20l on the third-generation model. While Suzuki hasn't given out the numbers, it claims that the new Hayabusa has the best coefficient of drag of any production street-legal motorcycle - a big deal then, considering it doesn't have wings and shrouds sticking out like its arch-nemesis, the Kawasaki H2.

The new Hayabusa continues to be powered by the same 1,340cc inline four-cylinder petrol engine, albeit with revisions to make it compatible with Euro V (and BSVI) norms. The chassis has minor revisions too. While the twin-spar aluminium frame holding the engine is largely unchanged, the subframe has been redesigned. The result contributes to an overall weight loss of 2kg over the outgoing model (264kg vs 266kg of the previous-gen). The seat height is marginally lower at 800mm vs the outgoing model's 805mm and the ground clearance too is up by 5mm to 125mm versus the outgoing model's 120mm. Suzuki says that its tried and tested chassis provides the required nimbleness and balance that is required on the Hayabusa and therefore an all-new frame wasn't required. The suspension components remain unchanged too, meaning the 2021 Hayabusa gets 43mm KYB inverted forks up front and KYB link-type rear mono-shock. While the spec remains the same for the fully adjustable suspension components, Suzuki says that the tuning and internals have been revised for a smoother ride.

Suzuki says that the top speed of the 2021 Hayabusa is a "nominal" 299kmph. The new Hayabusa, then, doesn't break new ground in terms of top-speed or engine spec. While power and torque outputs have not been revealed, we expect them to be marginally lower or on par with the outgoing model. The Euro V transition has given the 2021 'Busa a new set of exhaust canisters too - hexagonal in profile and much larger than the outgoing motorcycle. We don't expect much change to the sound profile, except that they will be quieter than before at city speeds. The braking hardware has been upgraded from the Brembo Monobloc callipers to Brembo Stylema on the third-generation Hayabusa. The brake rotors at the front have been increased from 310mm diameter to 320mm, with a different venting pattern for better cooling. The rear gets a Nissin single-piston sliding type calliper (versus the Tokiko callipers on the outgoing model). The wheels receive a new seven-spoke alloy wheel design and are shod with Bridgestone Hypersport S22 tyres.

As before, we expect to see the 2021 Suzuki Hayabusa arrive into India via the CKD route. With the older engine and chassis still doing duty, we expect to see an extremely competitive price tag too. My estimate is a starting price of Rs 18 lakh (ex-showroom), but we have a clearer idea when the 2021 Suzuki Hayabusa arrives into India by the second quarter of 2021. 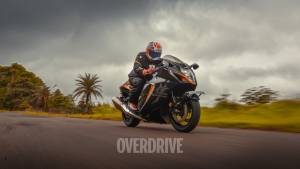 2021 Suzuki Hayabusa to be soon launched in...
Advertisement