A new set of pictures have appeared which show the upcoming second-gen Mahindra Thar off-roader being tested in its hardtop iteration. These pictures are some of the clear ones of the new Mahindra that we have seen and reveal some interesting details. One of the more noticeable bits in these pictures are the chunky bumpers on the new Thar, which seem to enhance this car's size quite a bit. Also noticeable is the expansive glasshouse that the hardtop comes with. This should allow for great visibility. The spare wheel also continues to be rear-mounted and the rear door will side-hinged. These images also show that the new Thar will be significantly larger than the current car. It seems much wider too. The off-roader could sit on a redeveloped version of the ladder-frame chassis from the upcoming Scorpio or even a RWD version of the more advanced modular structure from the Marazzo.

The front fascia carries forward the Jeep CJ derived look from the present car, complete with the 7-slat grille. But the wider track and protruding wheel arches are more purposeful. There also seems to be a more advanced suspension set-up. It is expected to carry forward the retro Jeep CJ inspired styling of the current car but with many of the rough edges smoothed out.

The new off-roader will also be powered by a new motor, given that the current mill is unlikely to pass upcoming emission norms. This could be a version of the new 2.0-litre diesel that Mahindra is working on for the upcoming second-gen XUV500, but most likely detuned here. A new 6-speed transmission, four-wheel drive and a low range gearbox will also be available. The interior will most likely be updated to provide more creature comforts and be less utilitarian than the current car. 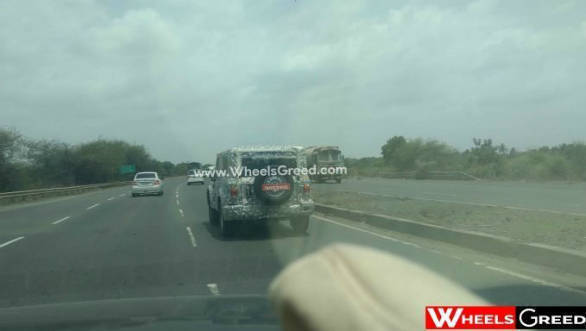 The new generation Mahindra Thar could make its debut at the 2020 Auto Expo just in time before the new regulations come into force by April 2020. The Thar has somewhat of a cult following in the country and no real competition other than the Force Gurkha. The Thar is much more accessible however and is ideal for both serious off-roading, given its capabilities, and as a more sedate lifestyle vehicle. The new one will build on these traits but in a less compromising package.