The second round of the 2019 Formula Renault EuroCup Championship took place this past weekend, May 10 - 12, at Silverstone. M2 Competition'sKush Maini started proceedings on the right note, setting the stage with the best practice time of 1m 57.724s. Following him were Oscar Piastri and Alexander Smolyar. 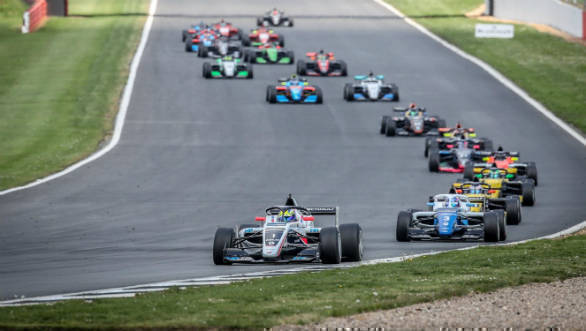 In qualifying on Saturday, Oscar Piastri began his domination, by taking pole for the first race. He clocked 1m 57.873s and was followed by R-ace GP teammate Alexander Smolyar. Maini set the third-fastest time with 1m 58.193s, 0.32s behind the leader.

In the first race, Oscar Piastri took the win after a tough battle with Smolyar. Maini held on to third place until Lap 2, before falling behind and finishing 18th. João Vieira and Petr Ptá?ek took second and third.
Oscar Piastri again took the qualifying crown for Race 2. His best time was 1m 57.022s, 0.595s behind him was Smolyar and Victor Martins came in 0.808s later. Kush Maini couldn't repeat his better qualifying runs from earlier, ending up eighth on the grid 1.167s behind at 1m 58.189s. In the race, Maini redeemed himself, finishing sixth and scoring eight points. This brings his season tally to 33 points at fifth place. Race 2 was again won by Piastri. Alexander Smolyar and Victor Martins followed in a repeat of qualifying. This makes Piastri the first to win two races this season.

The next Renault EuroCup race will take place in Monaco between May 23 and 26 during the Formula 1 weekend.