Nissan's premium automobile division, Infiniti will be showcasing an electric SUV concept called the QX Inspiration at the 2019 North American International Auto Show. The motor show that is scheduled to take place from January 14, 2019 onwards, will be a platform for multiple automobile manufacturers to showcase their concepts and production models. What makes the Infiniti QX Inspiration electric SUV concept an important one from the manufacturer is the fact that is the first-ever electric offering by the company. Apart from releasing an image, Infiniti has not mentioned anything about the powertrain or the driving range yet. 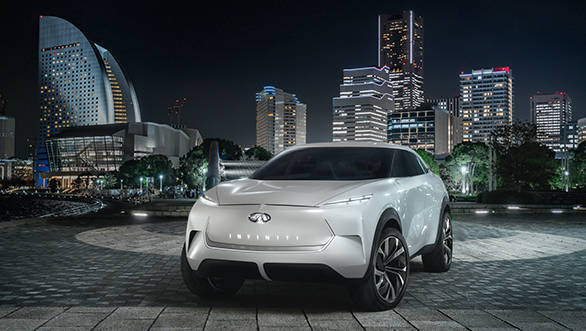 In the official release, Infiniti mentions that the "development of the new electric vehicle platforms enables the formation of spacious, lounge-like interiors. In the case of the QX Inspiration concept, the cabin has been handcrafted using traditional techniques and a choice of materials inspired by Japanese sensuality. The new interior technology follows the Japanese hospitality principle of 'omotenashi', creating a welcoming environment, while assisting drivers and connecting occupants to the world around them."

Previously, Infiniti had already mentioned that the company plans to electrify its portfolio by 2021. At that time, the company did not mention if it wants to go all-electric or hybrids. We believe it will be a mix of both. From the image, one can see Infiniti is making a bold looking crossover that imbibes all the essential design cues on the outside. Also, the cabin too will be inspired from the new age offerings and will boast of a futuristic design.