TVS Racing's Jagan Kumar has won the Championship in the Super Sport Indian (165cc) class of the 2017 Indian National Motorcycle Racing Championship that concluded on Sunday at the Madras Motorsport Race Track (MMRT), near Chennai. This is Jagan's sixth National Championship title and it surely was one of his most toughest wins.

The fifth and final round of the INMRC was held over the weekend, and Jagan was trailing his arch rival, Rajiv S from team Honda Ten10 Racing, by a single point. On Saturday, Jagan was unbeatable as he managed to fend off attack after attack from Rajiv Sethu. That win was crucial to keep Jagan's title hopes alive and going into the final race on Sunday, Jagan led the Championship by six points. 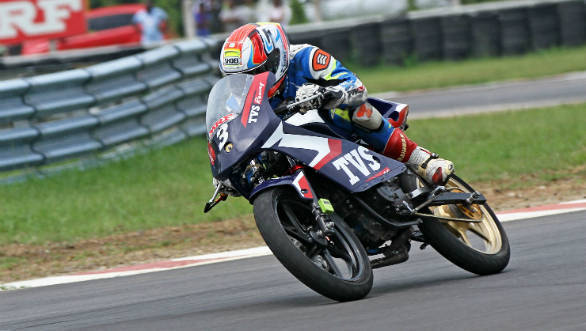 The last Race of the season, however, didn't turn out to be as dramatic as the audience hoped. Firstly, the rains had played spoilsport and the organisers had to use the shorter club circuit (short loop, 2.1km) of the MMRT instead of the full 3.7km track. Secondly, the crowd did not get to witness Jagan and Rajiv battle it out for the Championship. Rajiv Sethu was expected to give a tough fight to Jagan but, sadly, he crashed at C2 on the very first lap itself. From then on, there was no looking back for Jagan. The TVS Racing rider kept cool and concentrated on finishing the race. He didn't even mind conceding the lead to Rajiv's team-mate, Mathana Kumar who went on the win the race. TVS Racing's Harry Sylvester finished third.

Jagan Kumar's progress through the five rounds of the Championship has been nothing short of outstanding. At one point he had a 33-point deficit to Rajiv Sethu. Jagan soaked up the pressure and went on to win three races to keep his title hopes alive. He won the championship in the end with a 24-point lead.

In the Pro-Stock Class, Aravind Balakrishnan sealed the championship by raking up  a total of 138 points over the season. The Honda Ten10 Racing rider was in a comfortable lead, going into the final round of the championship. In the last race on Sunday, he finished eighth, which was enough for him to secure the title. The race was won by his teammate Anish Shetty.

The rains had also wreaked havoc with the race schedules on Sunday and the organisers could only run 4 of the 7 races that were supposed to take place. The other three races that were cancelled, were chosen for cancellation as the championships in those classes were already decided. 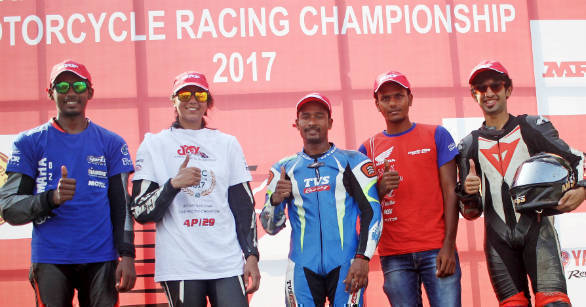 The 2017 INMRC National Champions are: