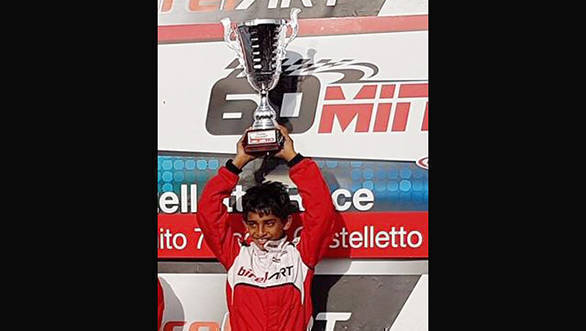 10-year old Ruhaan Alva, from Bangalore, has won the first round of the 2017 Easykart Championship in Italy, in the Mini 60 category. Alva, who races for MLG Racing and is sponsored by Italian kart manufacturer, Birel ART, managed to secure pole position with a time of 54.497s. In P2 was Frassineti Andrea from Italy with a time of 54.906s, while De Gaetano Alessandro took P3 with 54.936s. He went on to win the pre-final and final races to take the lead in the championship with 29 points. Standing second overall is Andrea with 20 points, while Alessandro is third with 16.

The second round of the 2017 Easykart Championship will be held on April 8. The remaining seven rounds are spread across the calendar till September, 2017.